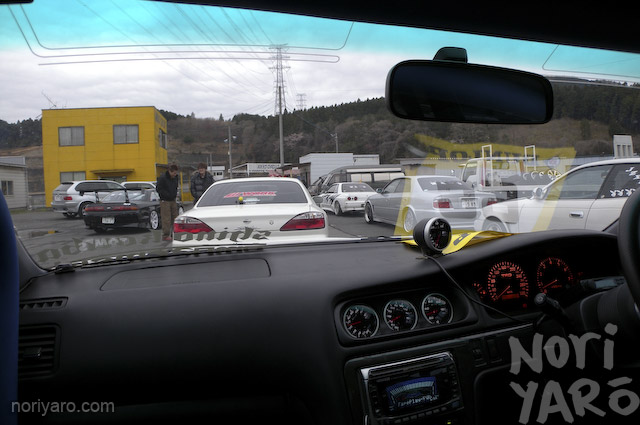 A good way to get back on the horse was to attend a regular-old “soukoukai” or “drive meeting”. This particular one was run by the “Kani Hashiri Ikka” or “Crab Running Family” at my local favourite, Nikko Circuit. Since the weather prediction was “overcast followed by showers”, I arrived as early as I could to secure a sheltered pit area. One of the previous wintertime Nikko events ended with me in sopping-wet overalls in the rain lying underneath the car on freezing concrete trying to get a red-hot exhaust back on. That wasn’t going to happen this time!

It was still pretty cold though, so I sat in the car with the heater running and listened to some podcasts while waiting for more people to arrive. 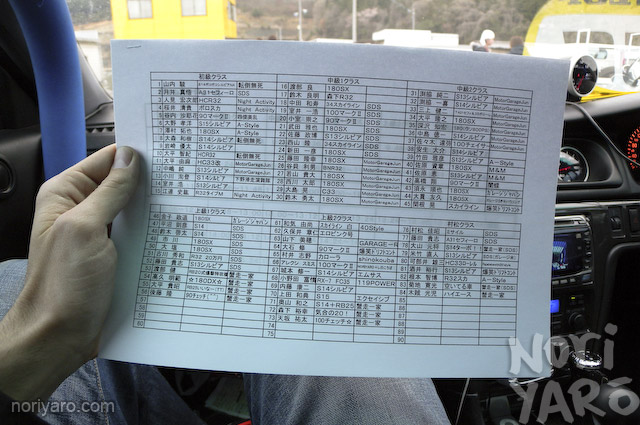 It’s always fun to look at the entry lists to see if any of your friends, famous people or interesting cars are coming along. You can see me there as #66 (bottom middle) with my “100 マークＩＩ” as “Team Noriyaro with Shino Kouba”.

We were going to see a Hiace drift today? 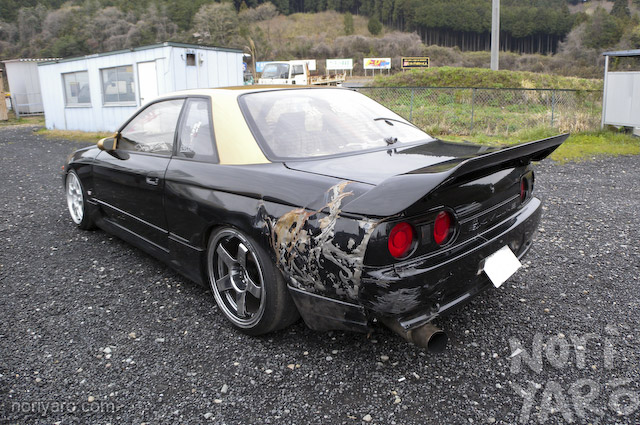 Not quite. The Hiace referred to this R32 GTS-t, which had a Hiace van wing attached to the back. 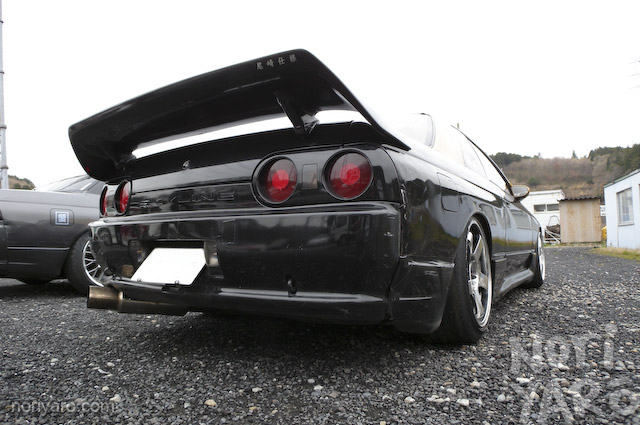 Damn, look at that. I think only Takurou-san’s 180SX box wing beats this for ridiculousness on a drift car. 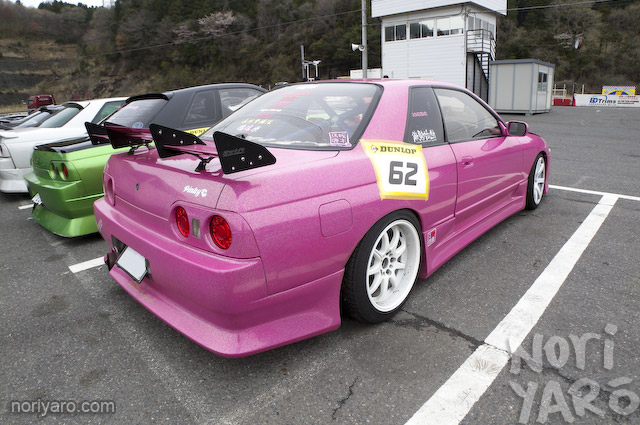 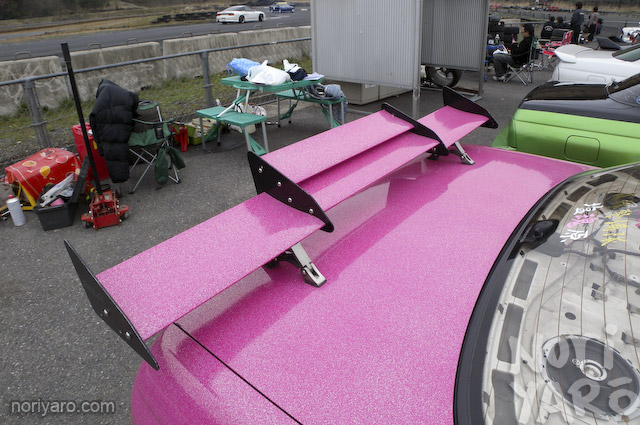 Speaking of eroticism, it looks like he has a bit of a wing fetish too. 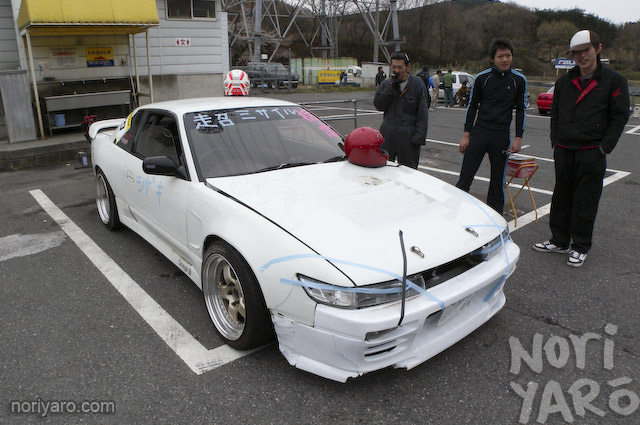 These guys were all standing around kinds of suspiciously.

“I am Japanese special driver!” he said in English.

The electrical tape sign on the window says “über missile”. 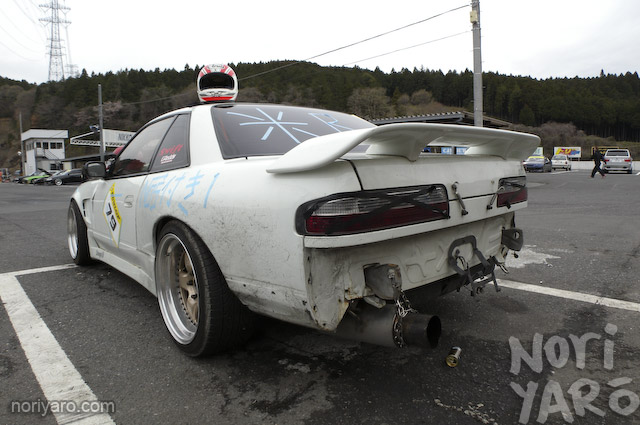 Yeah, it’s looking pretty haggard, but what about those wheels? 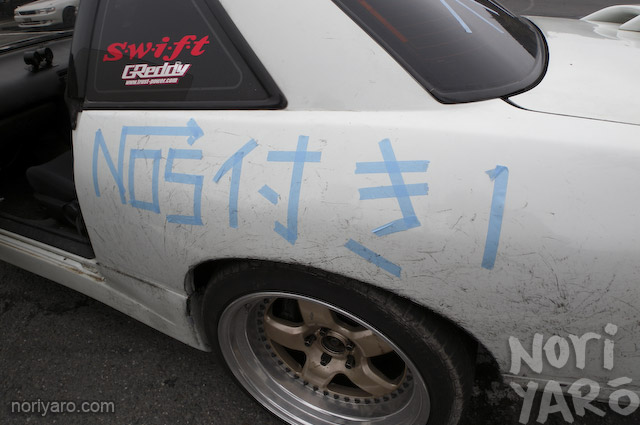 Panasports are a bit nice for a missile.

Hang on, NOS too? 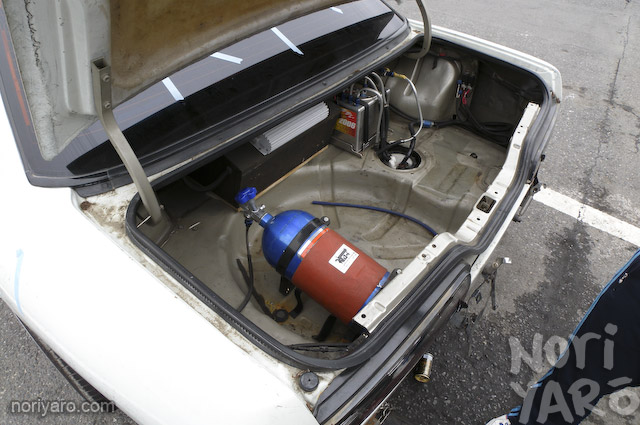 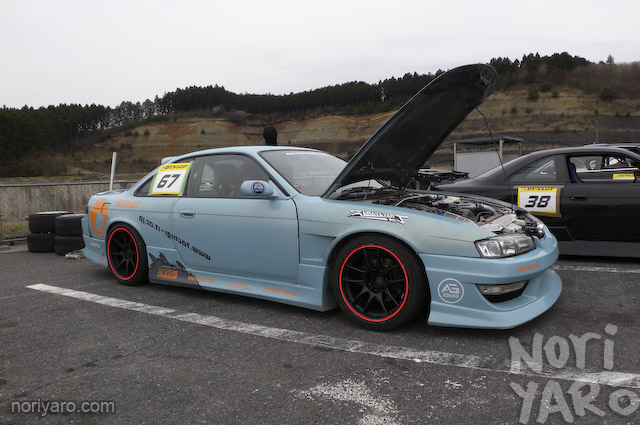 As a side-note, the owner had a Nintendo DS in the same colour.

Team Orange’s Naoto Suenaga had been invited to the day to give advice, judge the competition and do demo runs. To do this, he brought along his personal practice car. 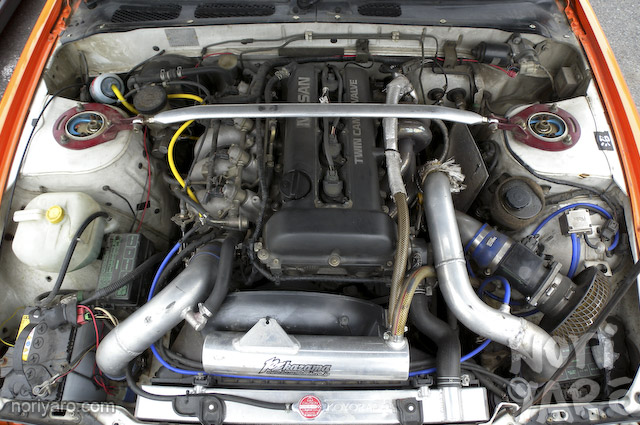 With just that, he was absolutely owning me in tandem runs. I could read the time on his watch when he was next to me, and I could just barely keep up when he was in front. It wasn’t until his tyres went a bit off that I was able to even remotely keep pace. Good bit of motivation to improve, those runs were. 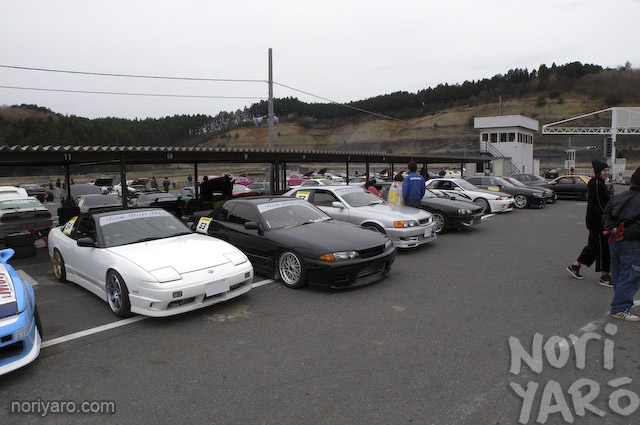 There were a good mix of cars there.

This D1SL driver came all the way down from Akita to practice, which is about a six-hour drive. 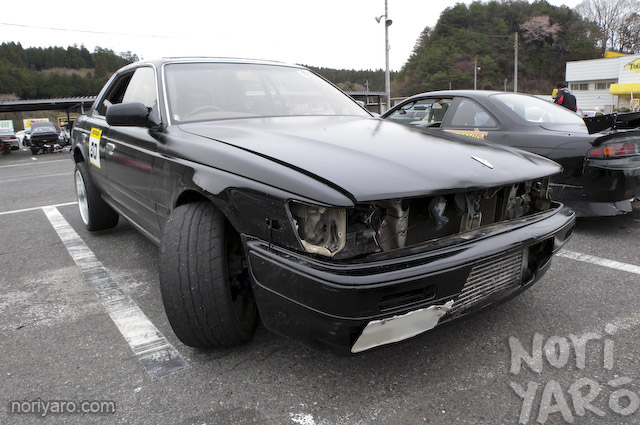 Remember the Laurel from this post? His dampers blew, so he had to put in some standard coilovers for this event. 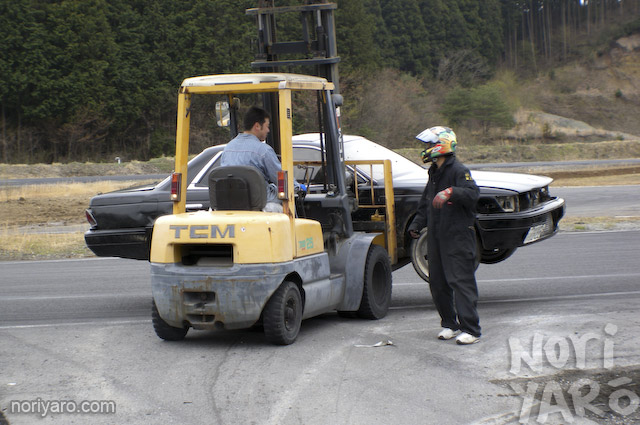 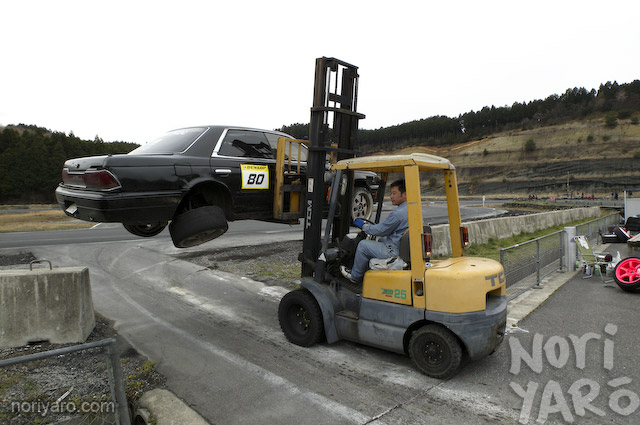 Oh no! We have another De Rorian Taimu Mashin!

Here’s my Mark II and Shino’s 86. Please ignore my plank of wood bonnet stay. It’s better than using an umbrella.

Speaking of ghetto mods, here’s a storage hook I picked up from the local 100 yen shop. Works pretty well as a rally-spec helmet holder! 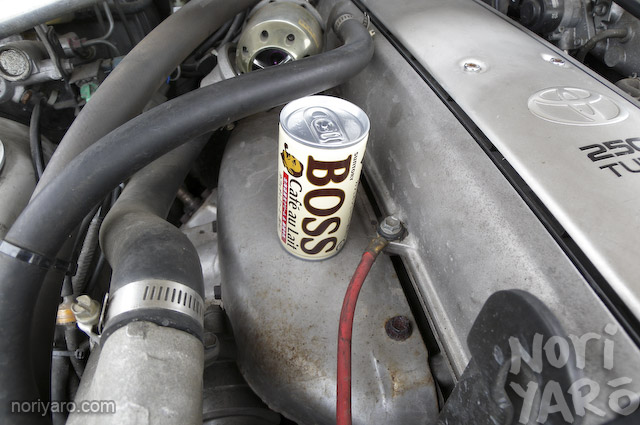 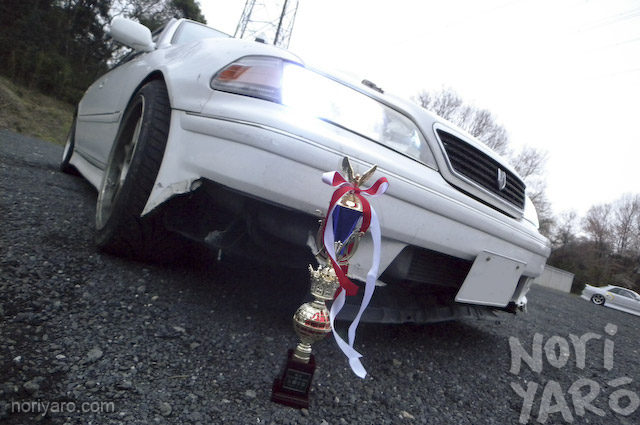 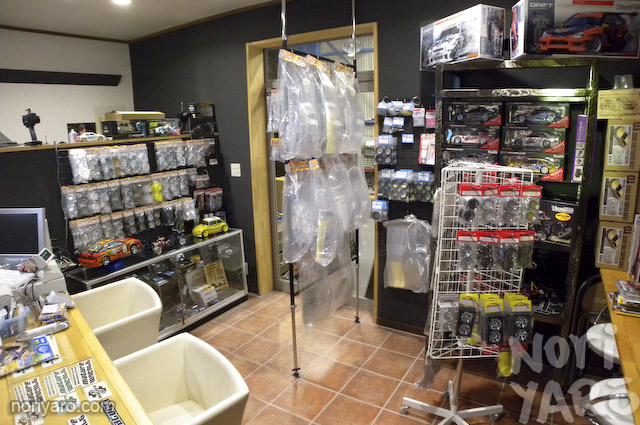 After the event, I thought I’d head over to the nearby Mature workshop and see how their RC course was coming along after I visited it the day before it opened in July last year. 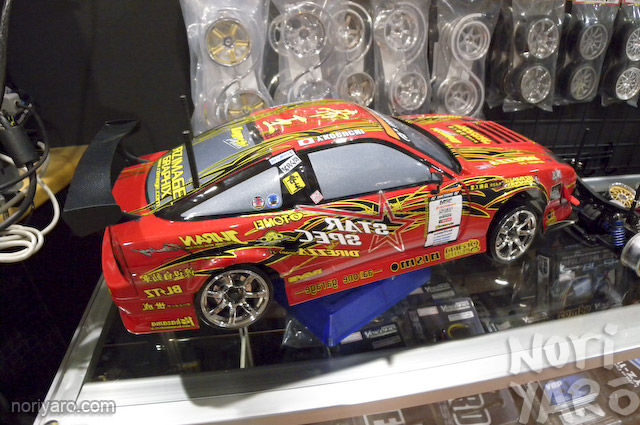 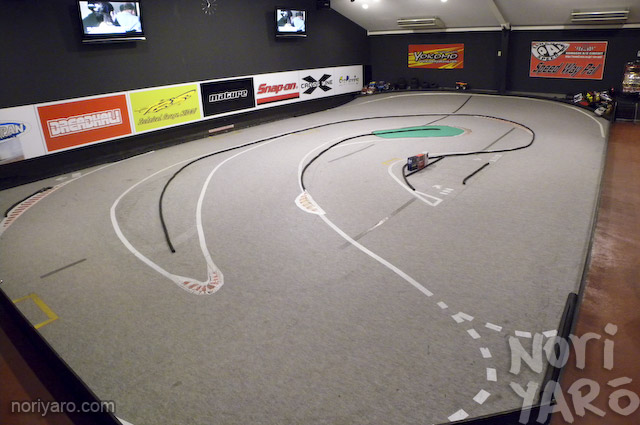 The track layout is more or less the same. 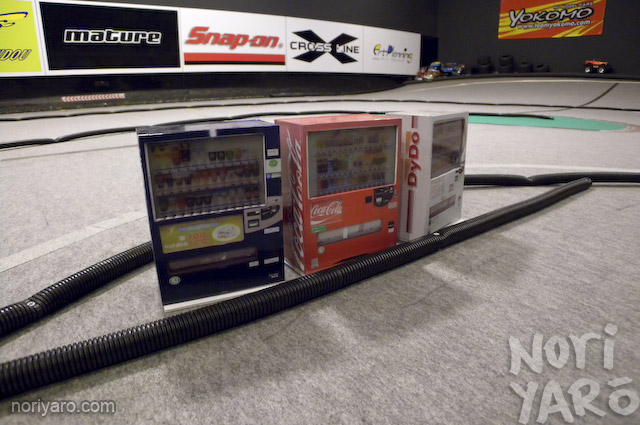 This time though, it has a couple of little “parking areas” for the cars to take a break in. These vending machines light up, apparently.

Mature’s Yoshibumi-san says that they’re working on making some scale-model roadside barriers out of metal to make the track look a bit more realistic. 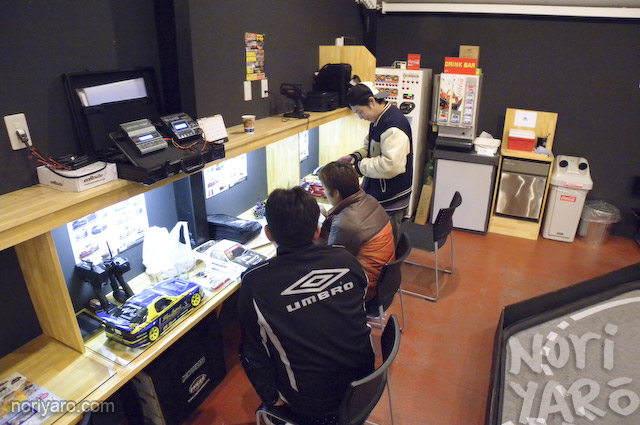 It was only early in the evening, but there were already a few guys there. 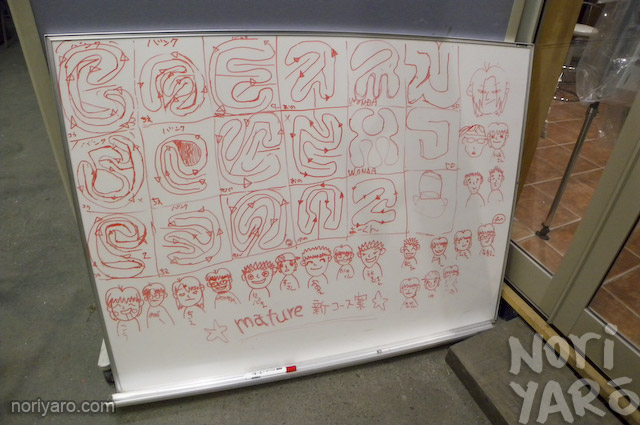 Here’s some track layout suggestions by the customers. 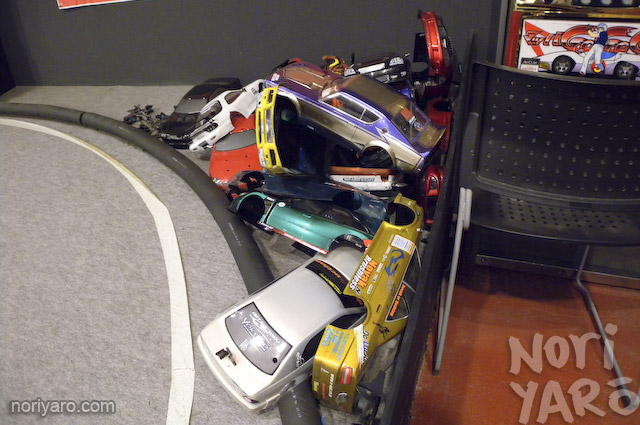 In the corners of the track were some miniature shell junkyards! 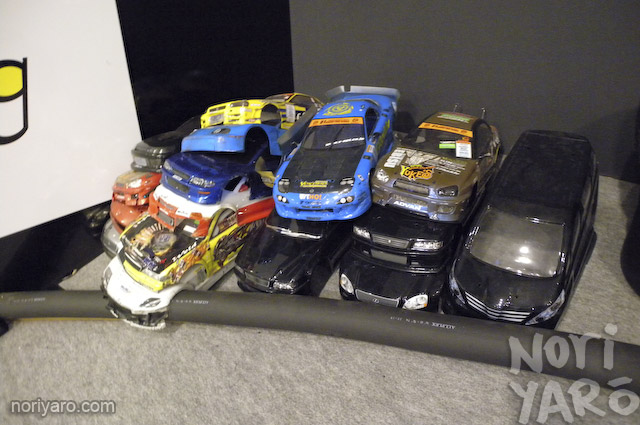 I need an RC drift car.

I think I should probably get a new front bumper first though.