WEEKEND EDITION: How to make a video of Ebisu’s Drift Matsuri

Pay attention. It is possible to make an interesting drift video that contains closeups of weeds blowing in the wind.

This video was made by a guy called Eiji from the Australian team Red Stage (here’s a pic), and a member of my old club, Initial Drift. He came to the last summer drift matsuri with a couple of other guys and pretty much had a camera in his hand the whole time.

Keep an eye out for the “Team Mad Max” Skyline, especially at 3:35 where I actually make a somewhat decent run on Minami! Also, the guy I shake hands with is Luke Fink, the recent winner of the Australian drift championship, after we won the Drift Land twin competition. 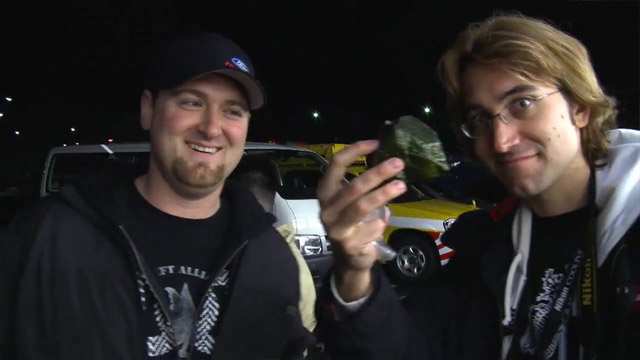 WE FEW, WE HAPPY FEW: We Are Drift preview

OK, so Luke’s been bugging me to put up a video from his We Are Drift video project. Here’s the latest trailer he put together of the D1SL event at Ebisu Circuit that we were at last month.

Keep an eye out for the part in this video where you can see me ignoring Andy from Powervehicles. while talking to Emily and scratching myself.

I was recently sent this video by Vidas from Lithuania. Believe it or not, Lithuania is a fairly big viewer of this website!

Here’s what he had to say: “This weekend we had our drifting championship final, and we made a small video about it. I thought maybe you and your readers would be interested about it.”

I received an email the other day from Terrell with a link to the Nissan Pacific website. Here’s a recent video of the Pacific Northwest guys driving in the Evergreen Drift series at Evergreen Speedway. Lots of fairly decent looking cars in there!

Evergreen Drift August 16, 2009 Round 3 from Abbitt Wilkerson on Vimeo.

This next video from over the border in Canada is from David Vickers, one of a couple of guys who visited Japan a little while ago. This video was made as his submission for the eBay Motors Master competition. Despite his ridiculously boro hachi and stupid hipster haircut, apparently he has two cute girls that hang around him all day and help him work on his car.

Any Sprinter guys who would like to help David win the eBay competition he made this video for, visit the eBay Motors Master website and rate his video.