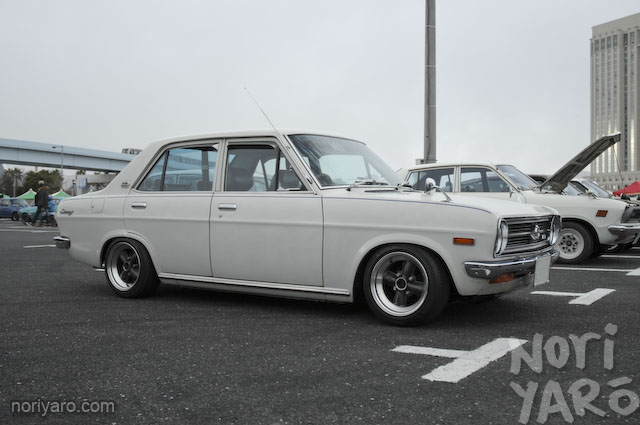 I was still able to take a photo or two, so I tried to find a few things that I hadn’t already shot at the previous events. 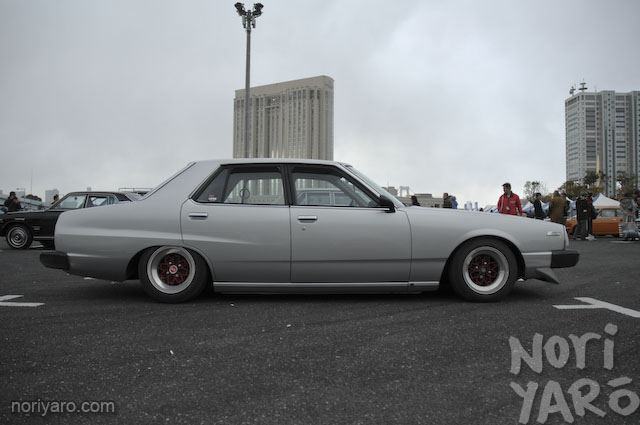 Come to think of it, who cares if I’ve shot it before or not. A slammed Japan is still just as cool the second time. 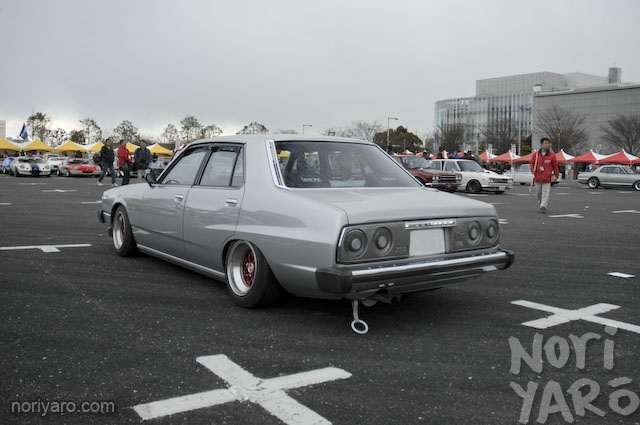 Most of the shakotan-style cars had already left by the time I arrived. I guess they needed plenty of time to navigate their way home the long way. 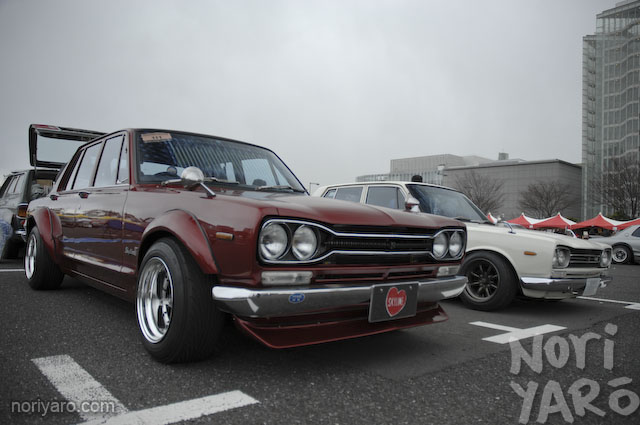 Two Hakosukas side by side. There you go, James. 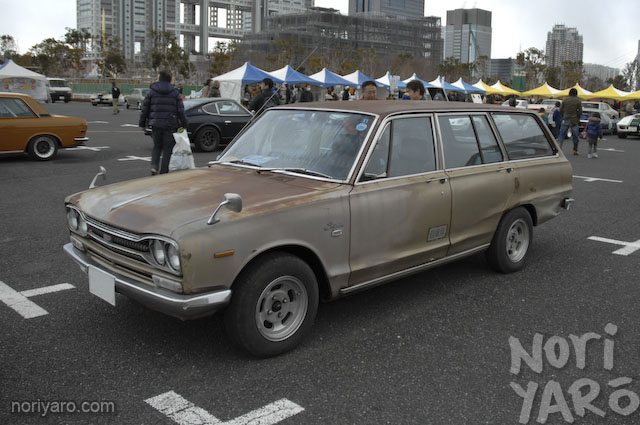 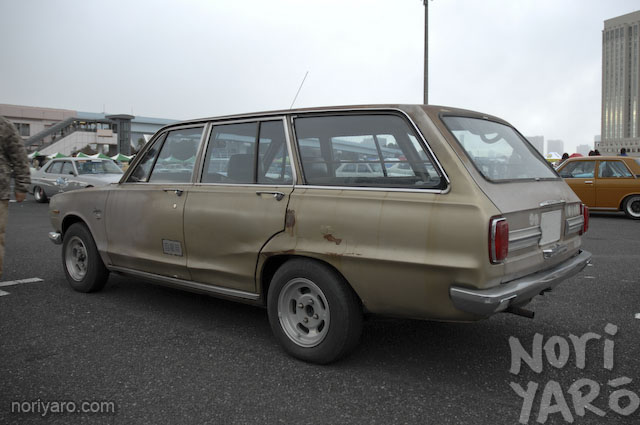 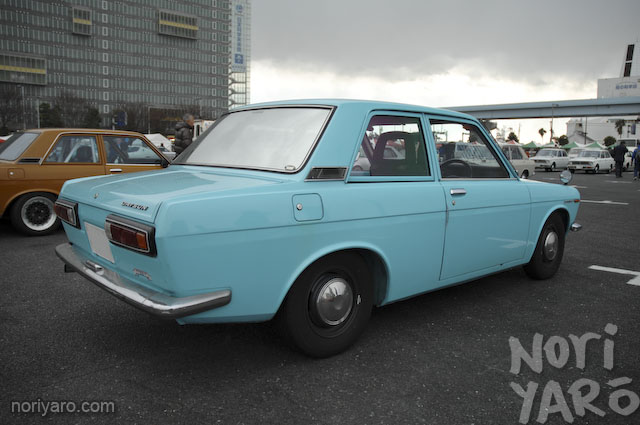 I had to write about a hundred captions for magazine articles in the past week, so I’m all out of clever puns. 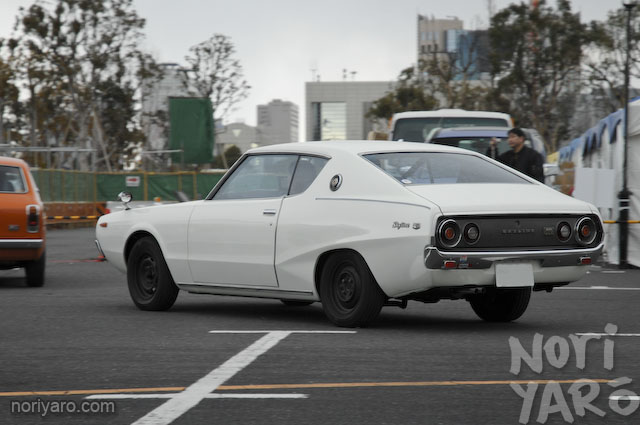 I started running around taking photos of any car that was idling, since that meant the owner was about to leave. 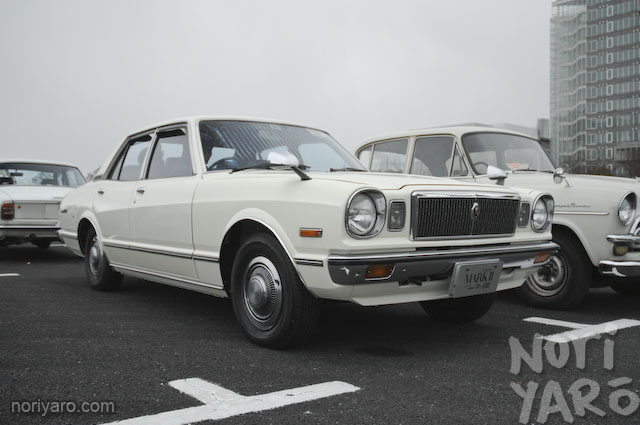 The “pig eye” Mark II. If you like this generation, put 豚目 (butame) into your favourite image search engine. 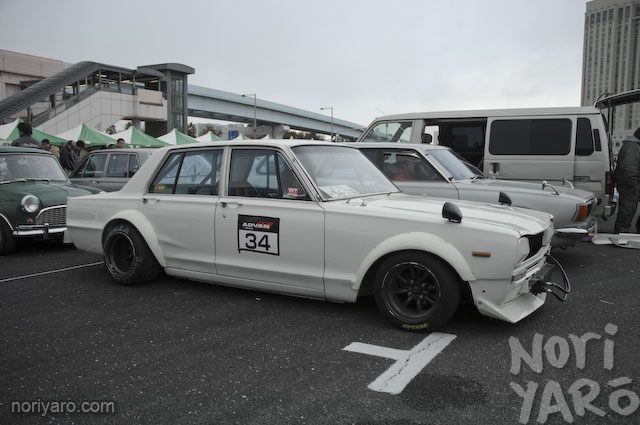 This four-door Hakosuka was pretty neat. As I was taking photos, a friend of the owner walked up and said “Disu izu Japaneezu reisu kaa!” 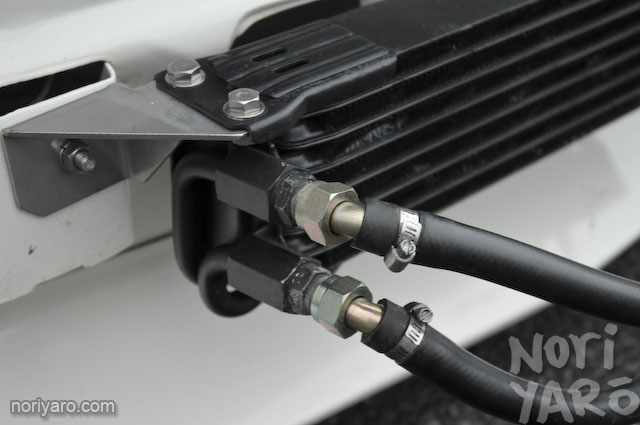 For anyone who puts an oil-cooler on the front of their car to try and copy this style, here’s how it should look. 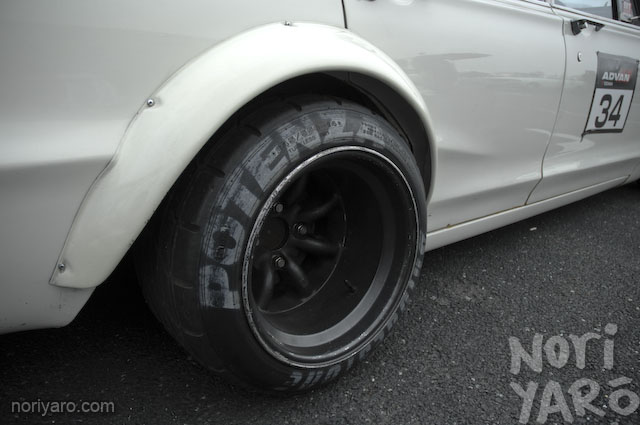 I’d say the car was purely for show though, because the tyres were about as cracked as the skin on the back of my hands in this cold. 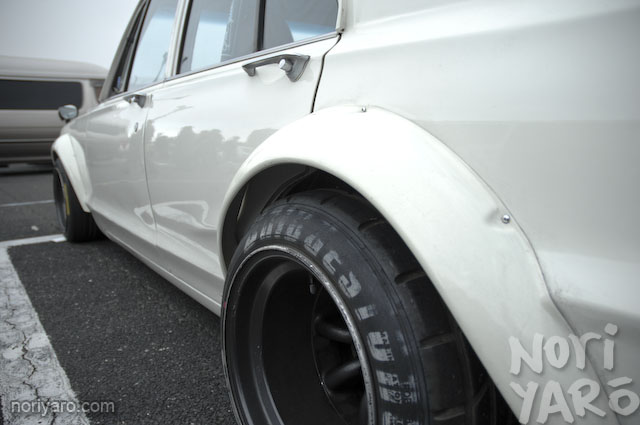 To get the car started, a group of about four or five guys pushed it around the parking lot.

“Battery died.” said the same guy, in Japanese this time. 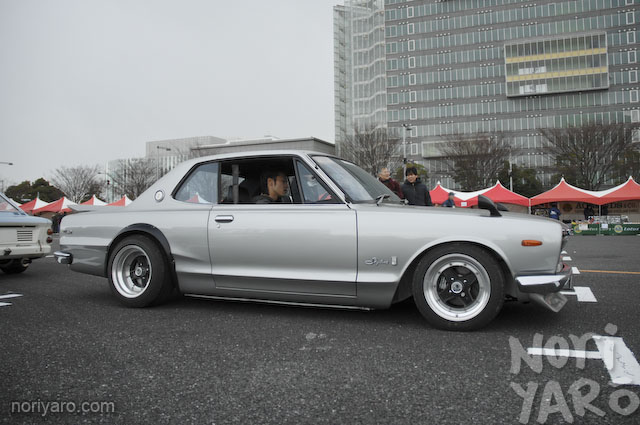 If you’re going to drive one of these, you need the right hairstyle. 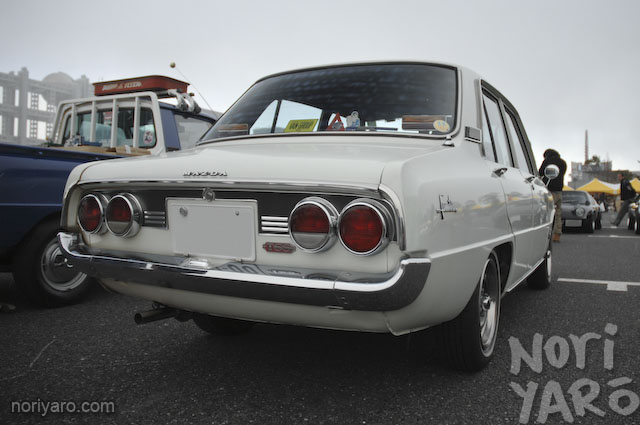 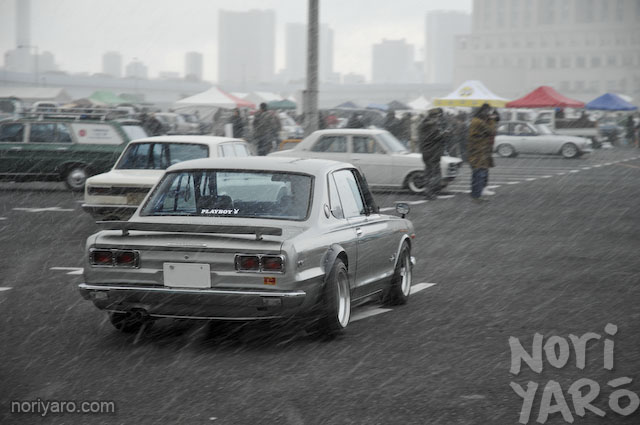 All of a sudden, it started snowing heavily! 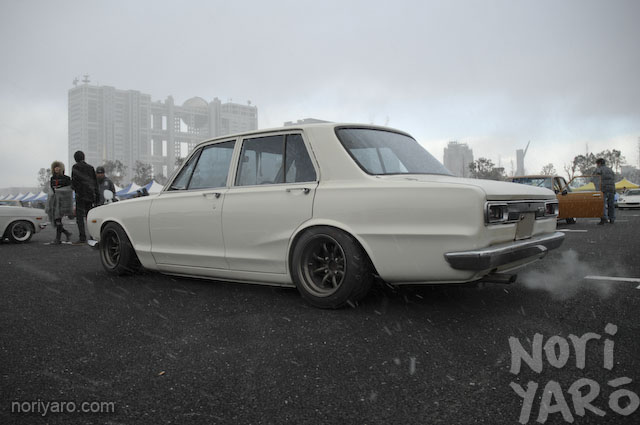 Last time I saw this car, he had Hayashis on it. 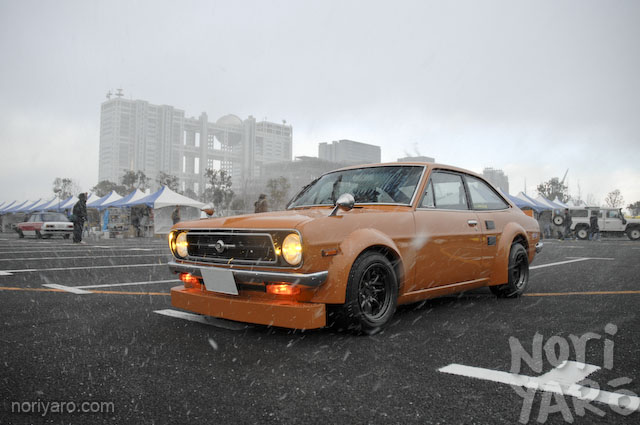 It was sunny earlier that morning too.

See what I did there? 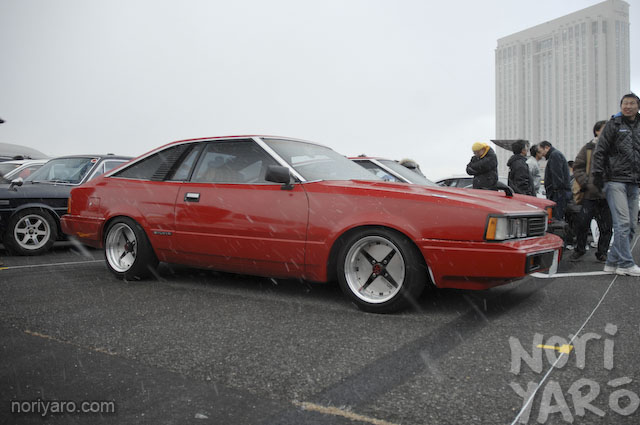 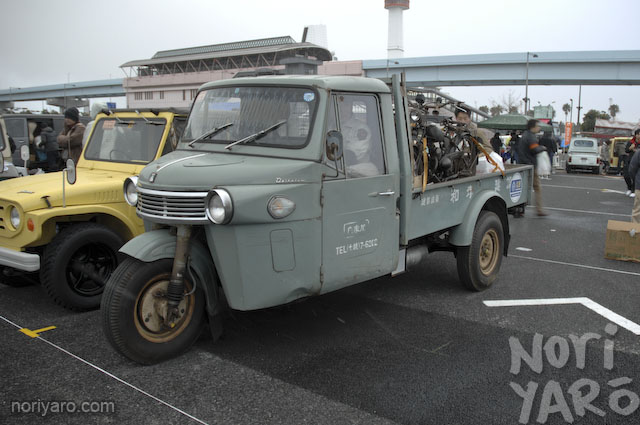 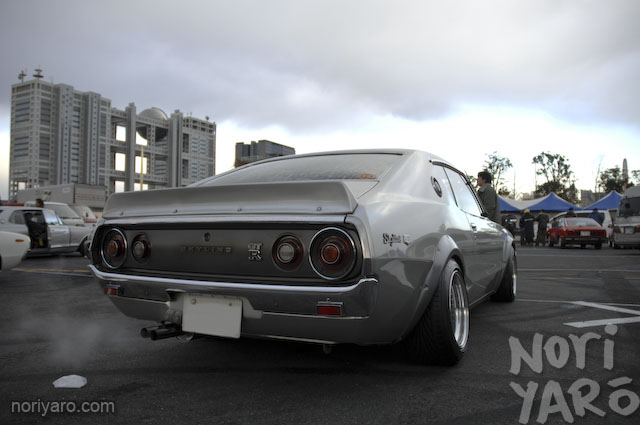 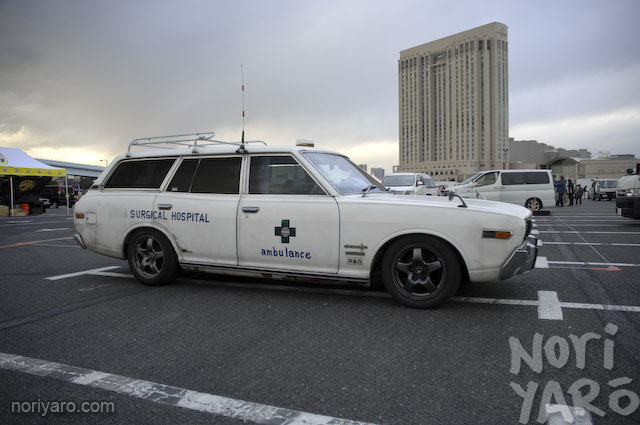 OK, here’s something seriously cool in that weirdo way. 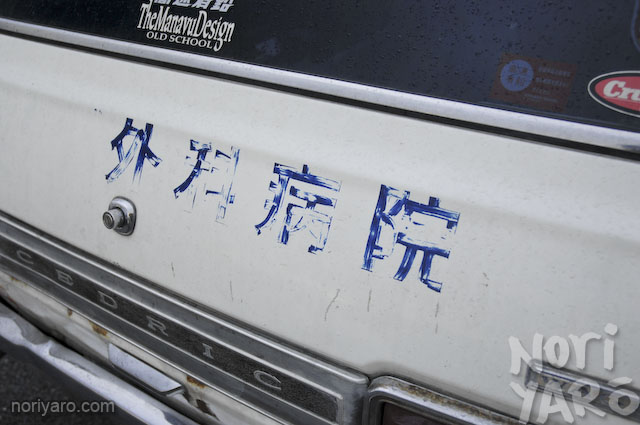 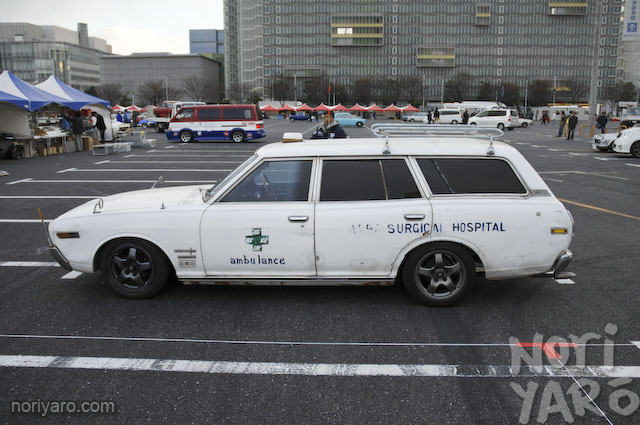 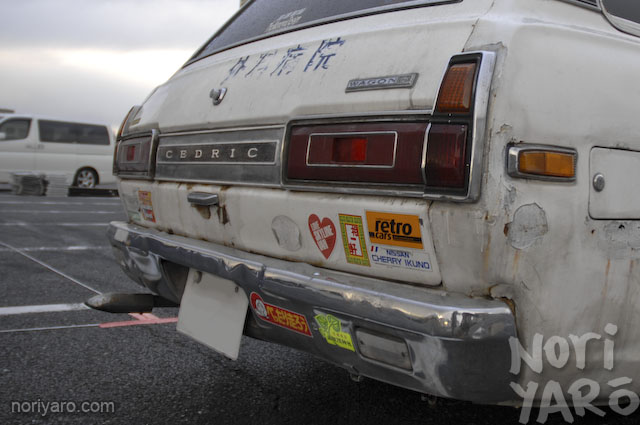 There’s something weird about the kanji on that cross though. 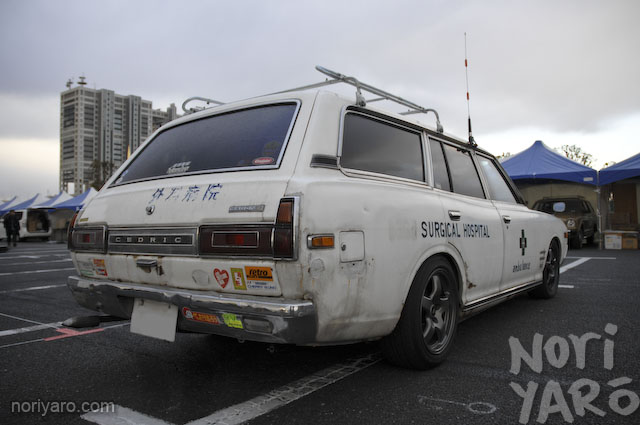 So what’s the deal with this car? Turns out that kanji says “Kousoku Yuuen”, which to my best guess translates as “Leaded Highway”, as in “leaded petrol”.

It’s the name of a magazine that specialises in weirder old cars, but not the usual Fairlady and Hakosuka purist racing stuff. Think of old Crowns with 2JZ conversions on stock Supra wheels and things like that. My first guess for the translation was “Leaded High Speed”, but I don’t quite think that’s the image they’re going for. 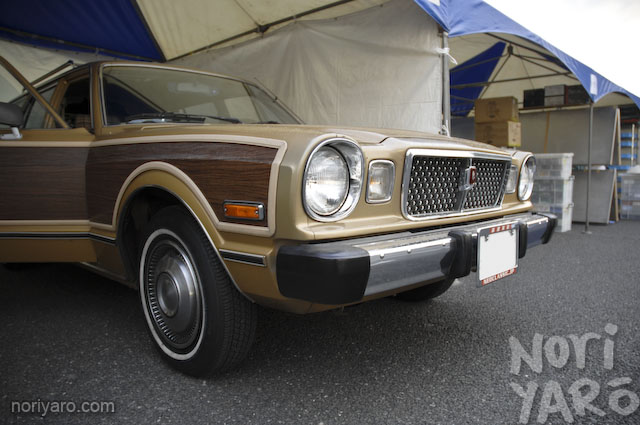 This pigeye is actually a left-hand-drive American market model, and belongs to someone from the magazine. 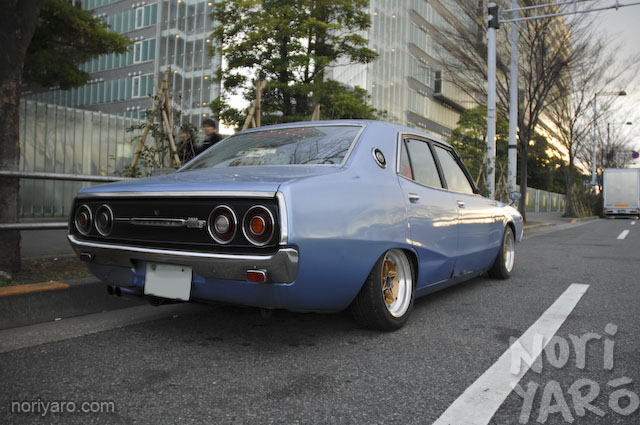 I caught this nice but slightly rusty Yonmeri outside the gates. 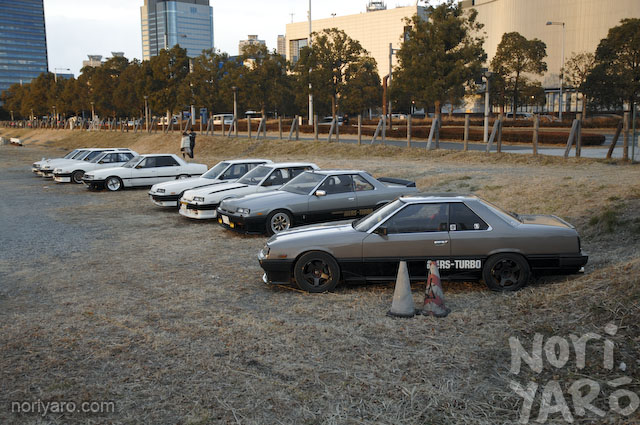 Just down the road in the parking lot were a few little collections of cars like this too. If you’re in Tokyo around this time next year, I recommend checking out this event. Just come a little earlier than me!

Speaking of which, I met a guy named Rod at the show who was there a little bit earlier than me, and he’s been putting up some photos of his own as well.