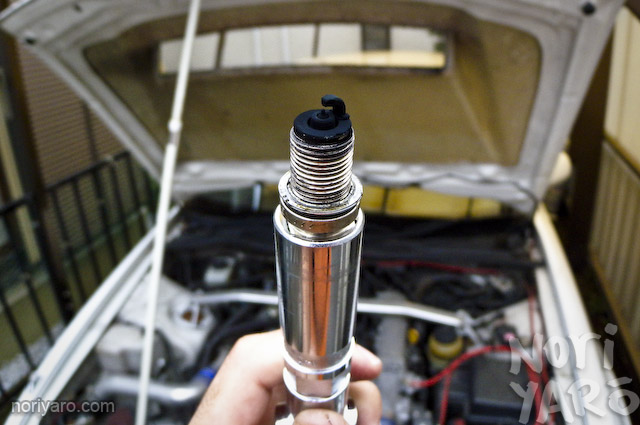 So here’s what happened: I spent all of Saturday installing a pair of Labyrinth Type II knuckles and JZX110 tension rods into the Mark II in anticipation of taking it out to the track sometime soon.

I’ll be putting up a set of photos of that shortly.

Since I have exactly zero experience with working on the suspension of Toyotas, it took me a fair bit of time to get all the parts installed and sort out the alignment. I also had to start and stop the engine quite a few times to turn the steering wheel all the way to the left and the right while I was adjusting the suspension.

As I was driving home at midnight to take a quick break before getting my camera equipment and driving up to Ebisu to catch the Sunday round of D1, the engine started to cough a bit around 2000rpm. It then completely stalled in the middle of a fairly busy road. The car drove in a straight line, and the steering felt great, but the engine was running like it was full of spanners. It was about then I had one of those moments where you think “But I didn’t even touch the engine!”

It turns out that I had fouled out the plugs by starting and stopping the engine too much. The 1JZ is running bigger injectors and a tune, so it’s not surprising the plugs turned as black as they did. Unfortunately, the Skyline had a flat front tyre too, so I couldn’t take that up to Ebisu either!

I swapped out the HKS plugs for some nice new NGK iridium racing plugs today, and to be honest, I’m kind of glad the old ones fouled up. The idle is now a perfectly smooth 900rpm, and the accelerator response feels better than it did before. I can’t wait to take it to the track!

Next on the list is lowering the suspension back down after getting it inspected and registered, give it an alignment and swap the old front tyres for some new Dunlop Direzza Star Specs.