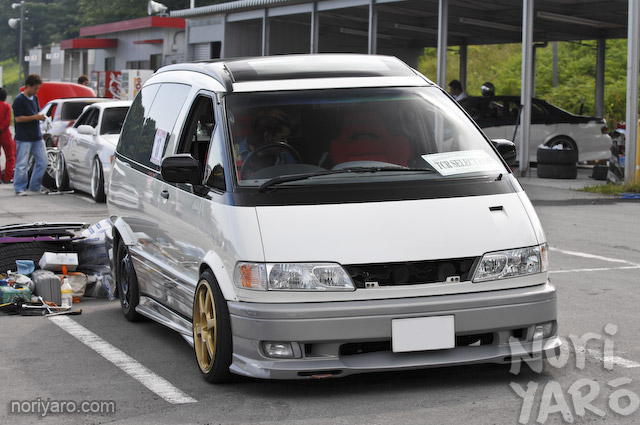 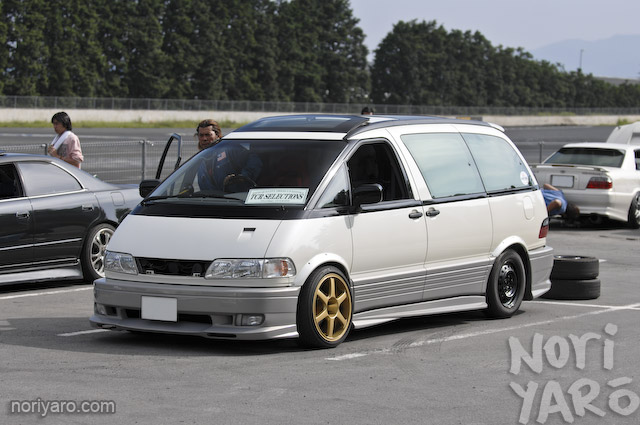 Most of you are probably hoping to see some photos of this Estima in action. Unfortunately, he decided to call it quits early in the day! 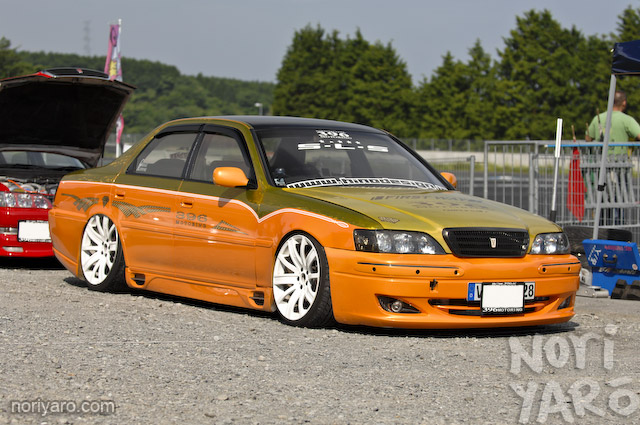 You may recognise this car from a recent wallpaper. I’ve seen this guy a couple of times at the touge, but I’ve never actually spoken to him yet! It’s not an automatic, but he came along to support a friend.

I think this Mark II Blit wagon was completely stock apart from a set of normal JZX wheels on the back with some cheap tyres.

He was driving it like he stole it though.

These guys brought along a cheap automatic Cedric to kill on the track. 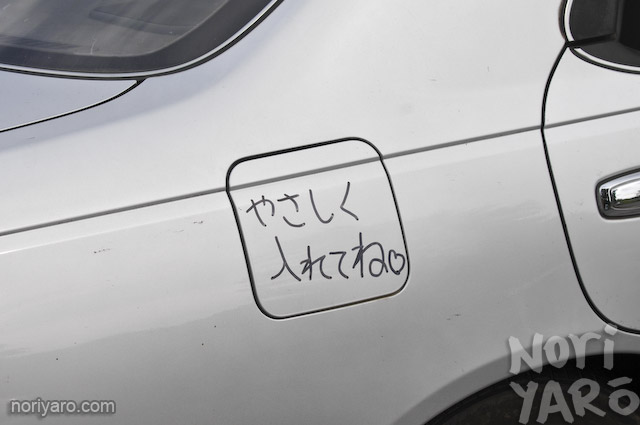 It says “stick it in gently” on the filler flap. 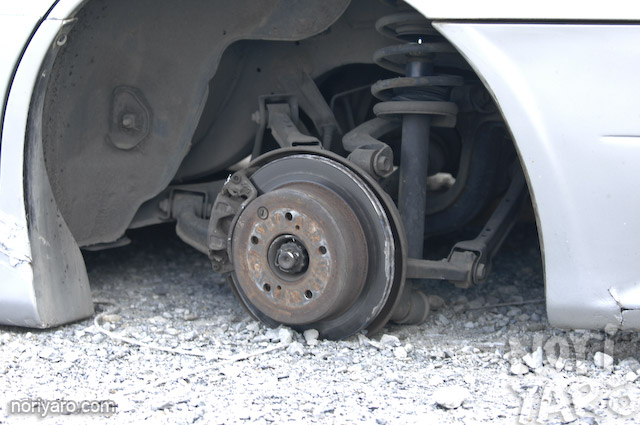 As you can see, they definitely killed it. 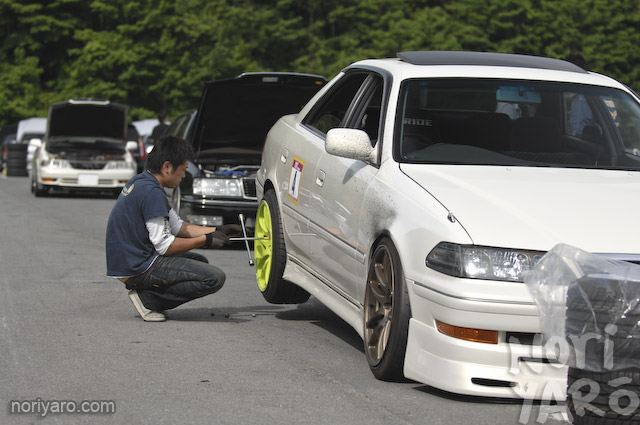 Most of the cars there were of the large Toyota variety, since they are plentiful in automatic form. 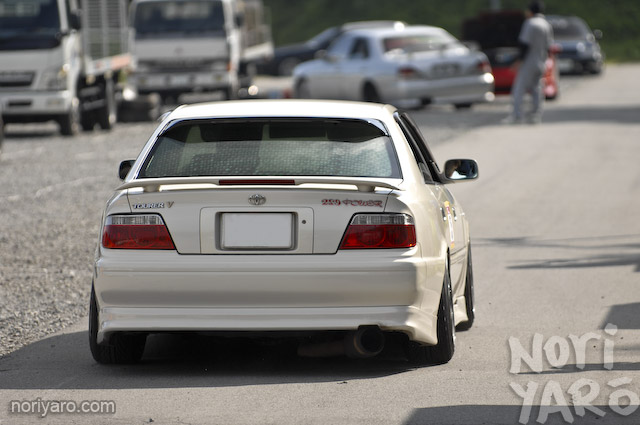 They look just as good as the manual versions from the outside though. 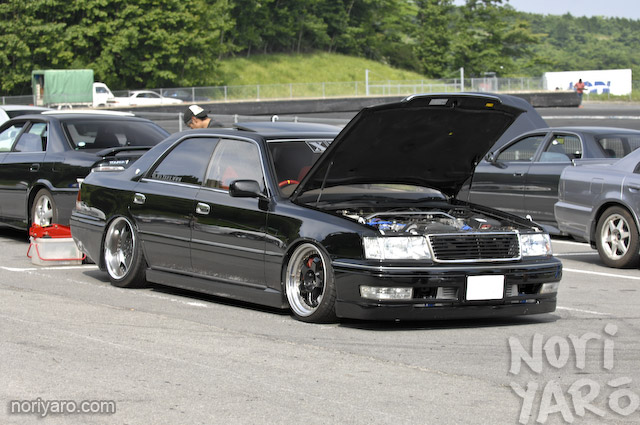 Toyota Crowns converted with JZX90 engines and transmissions seem to be becoming more and more popular. 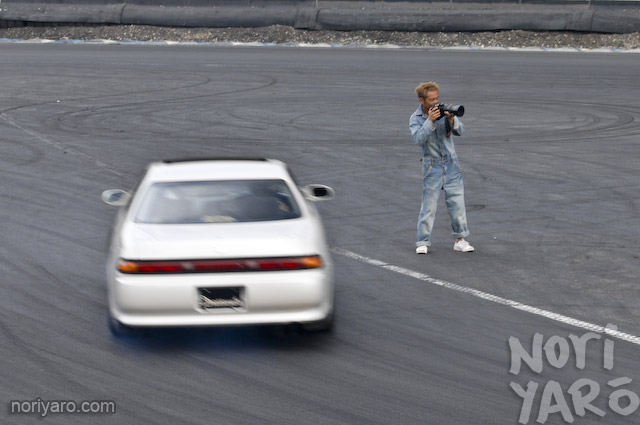 This is Drift Tengoku’s editor, Ryuusuke Kawasaki. He really gets into his work. 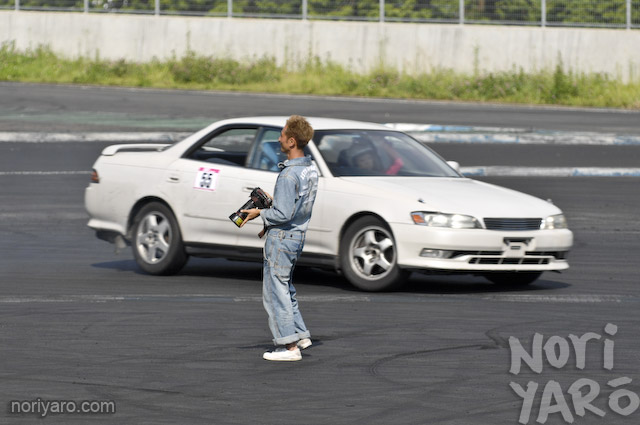 Kawasaki-san said that he has been around drift cars so long, that he knows how to stand within centimeters of them as they drift and not get hit. 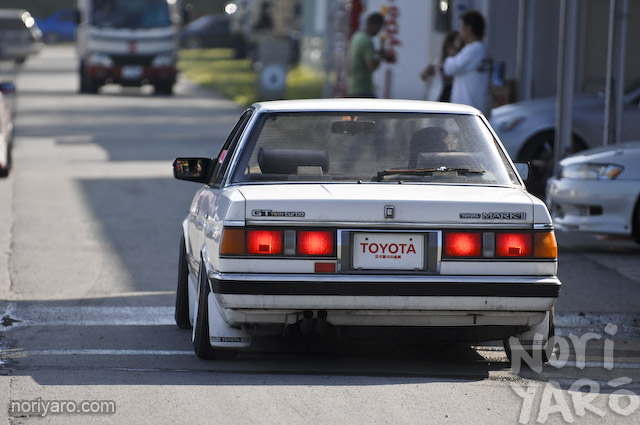 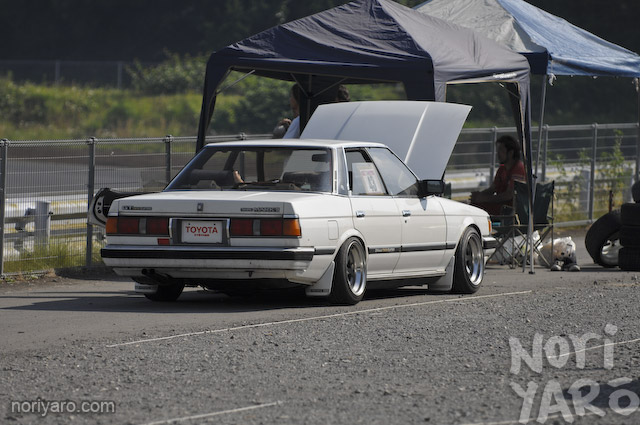 Here’s another shot for the X71 fans. 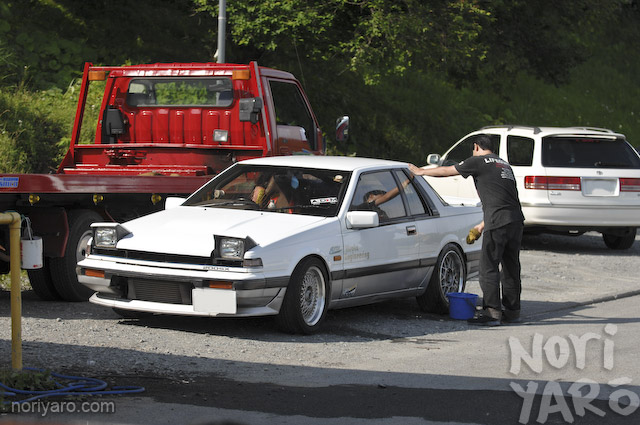 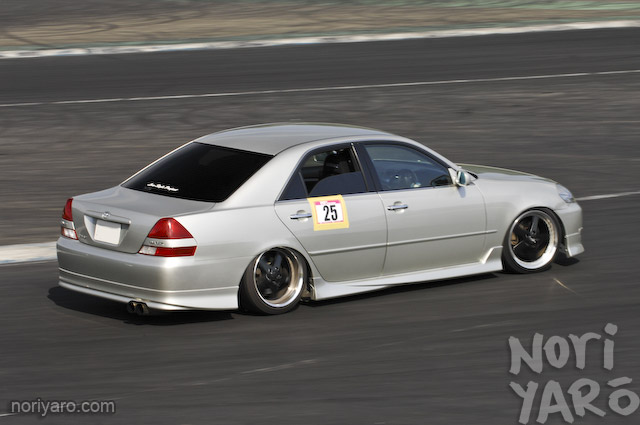 JX110s should become more popular as they become cheaper. It would almost be a shame to strip the interior of one of these to use as a drift car, since they are extremely comfortable! 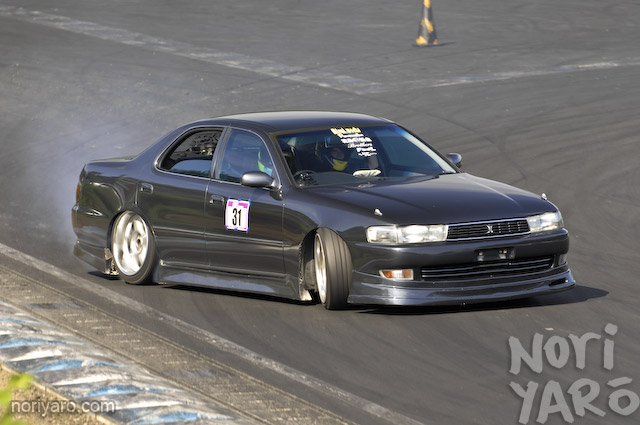 Here’s another couple of shots of yesterday’s teaser Cresta. 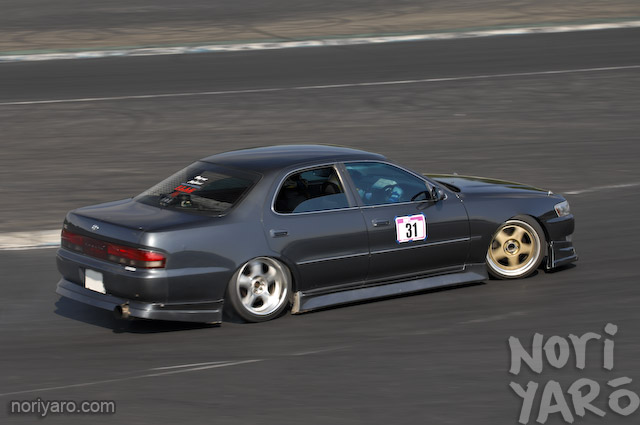 It wasn’t actually that girl’s car, it was her boyfriend’s. She still rode passenger seat during the drift sessions though. 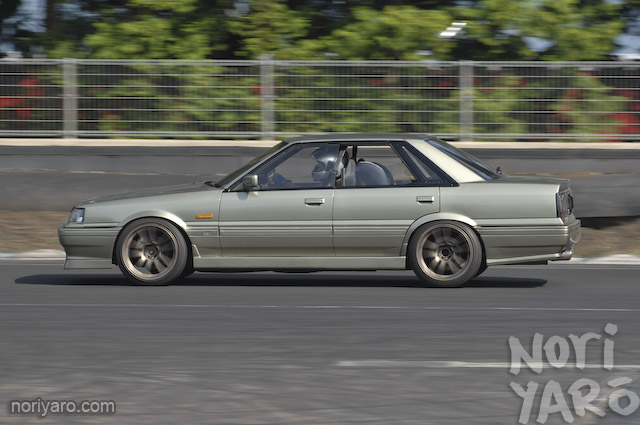 For some reason, the profile of this R31 looked a bit different from the usual. 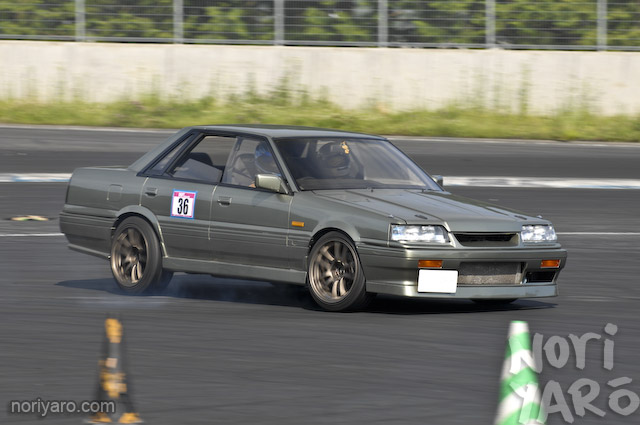 It might have been the unusual paint and late-model Work wheels. 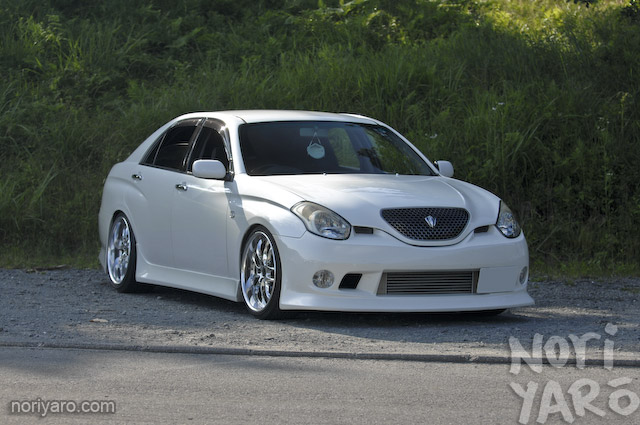 OK, I’ll have to give it to this particular Verossa. It’s really good looking. 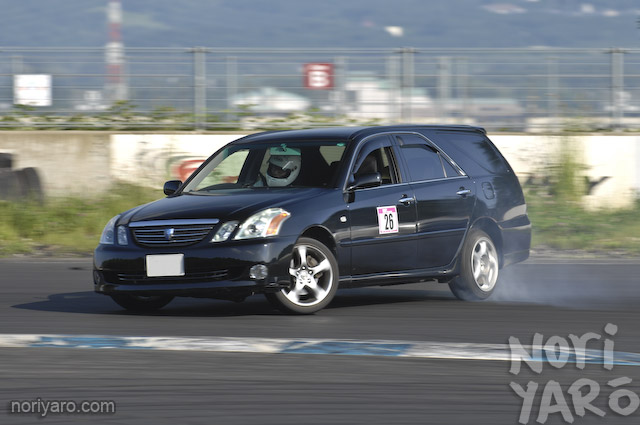 The Blit driver didn’t give up early. He kept smoking it up all day. 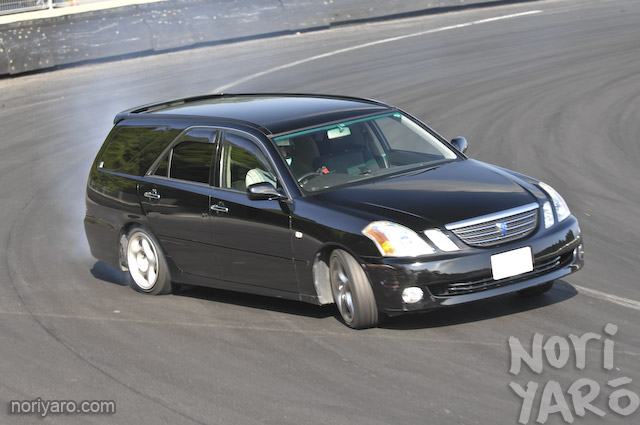 It makes me sea-sick just looking at it. 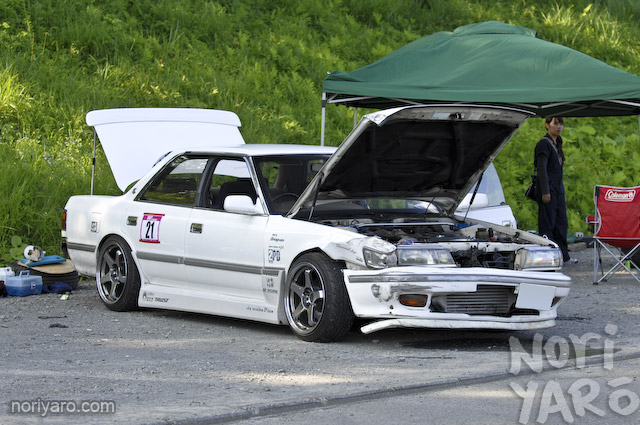 Ouch. Remember how I crashed at Fuji recently? This guy copped it on the same corner. 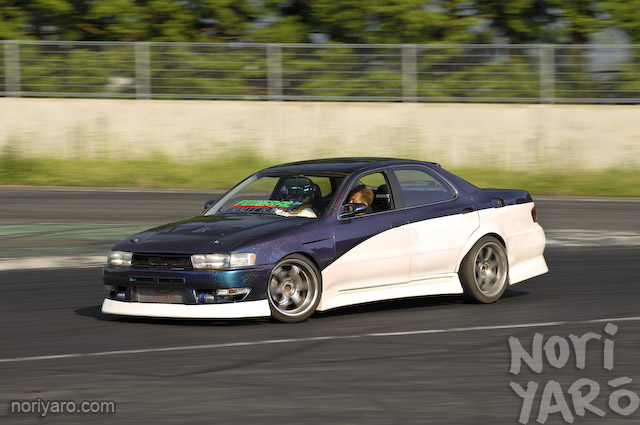 Kawasaki-san, who also drifts an automatic JZX90 Mark II, went out for a ride in this one that belongs to Miyamoto-san from MISSILE… 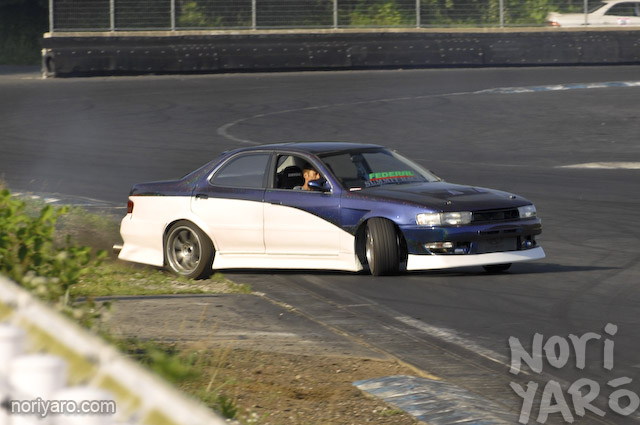 …before taking it out himself.

Ever seen a magazine editor who could drift as well as this? 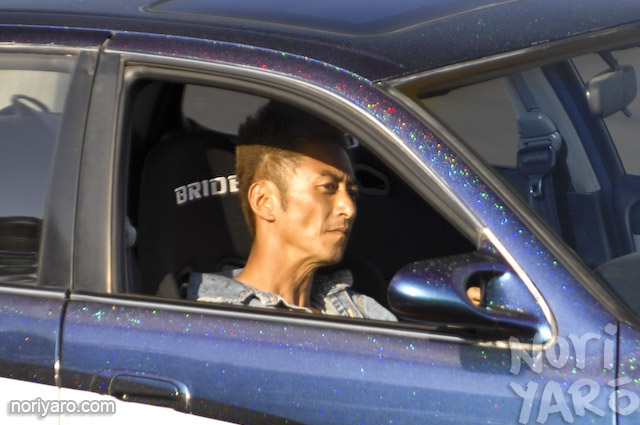 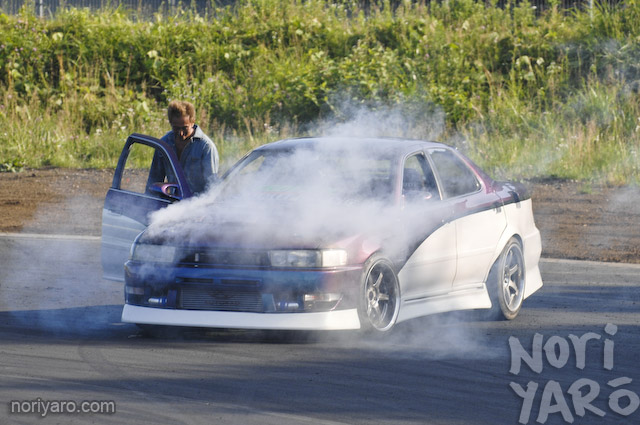 Or perhaps not so seriously. After about five non-stop laps, the car conked out and it looked like a radiator hose let go on him. 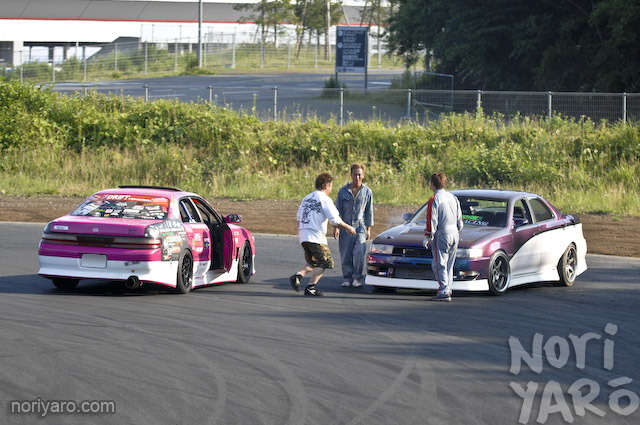 Miyamoto came racing up in Kawasaki-san’s car (the pink one on the left) to survey the damage. Apparently, it was just overflow that caused the sudden rush of steam.

They really do some goofy stuff in Japan!