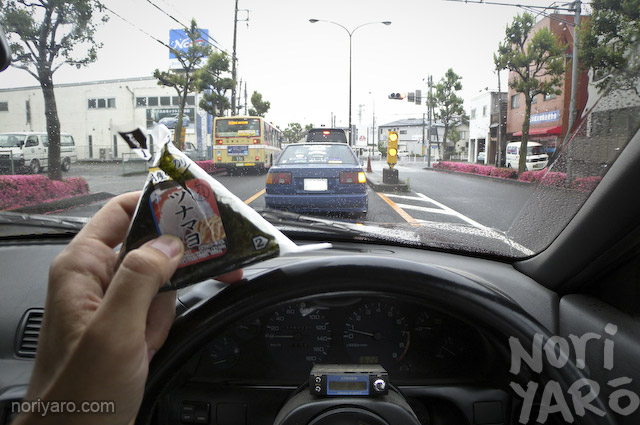 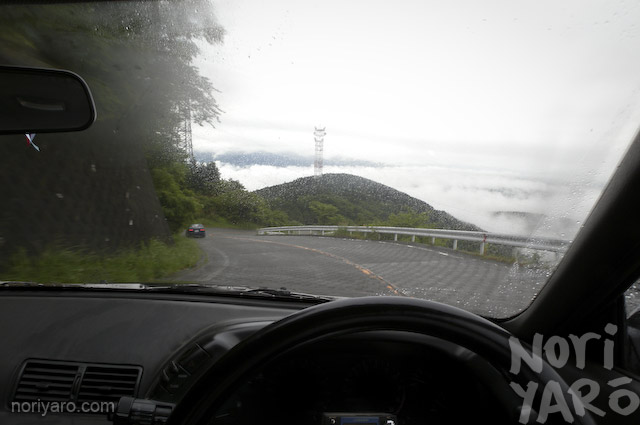 One of the nice things about taking the free roads to Fuji Speedway is the view as you head over the mountains down towards Gotemba.

Yep, that’s what we’re here for. 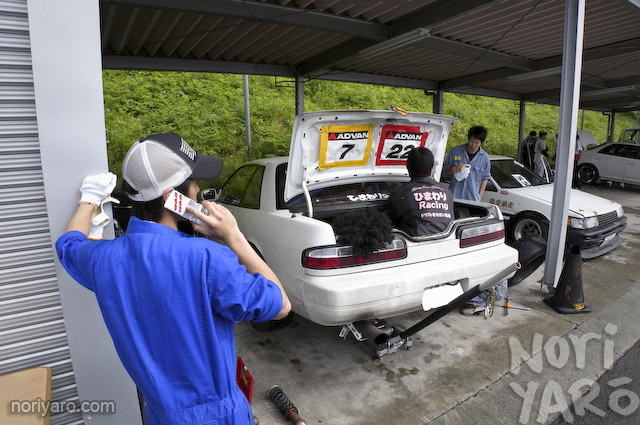 The Himawari dudes are all young guys, and really seem to enjoy getting into it. 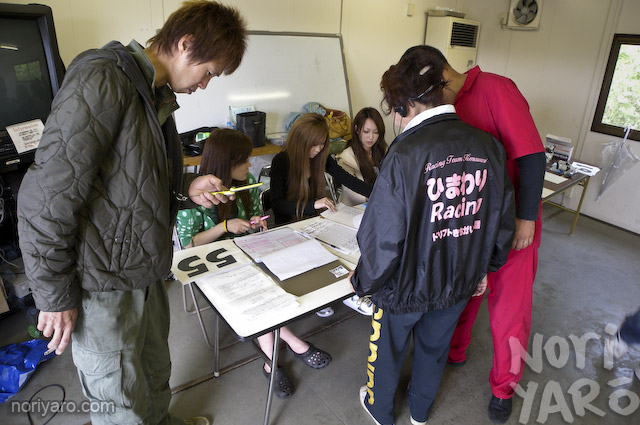 Their girlfriends manned the sign-up table. After you signed up, they gave you a complimentary bottle of “Lipovitan V”, which is an old-school Japanese energy drink. It smells and tastes like Red Bull, but it’s in a tiny bottle, so you don’t have to endure drinking an entire can of it. 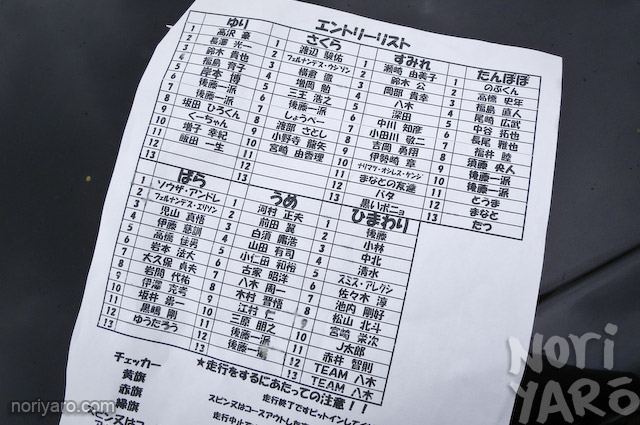 I talked about this in a previous post, but I might as well mention it again. All of the classes were named after flowers, since “Himawari” means “sunflower”. From beginner (delicate flowers) to expert (strong flowers), the classes were:

Who can read what class I was in? 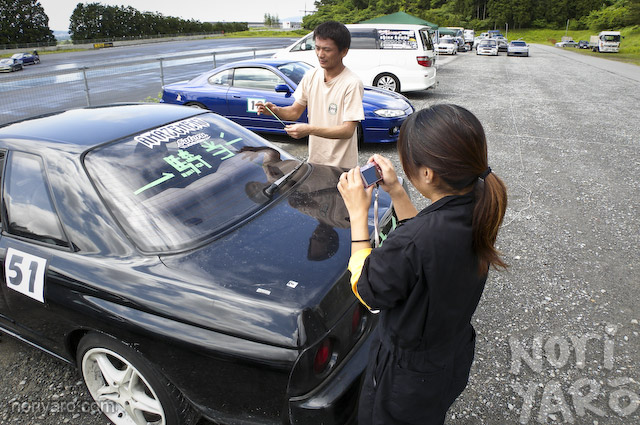 With a bit of time to waste before our session, Riichan wrote “ikkitousen” on my window with tape, which basically means “the fighting strength of a thousand warriors”.

I wrote “missile” in katakana, since I know how to do it, and it’s a bit more accurate, as far as my car is concerned. 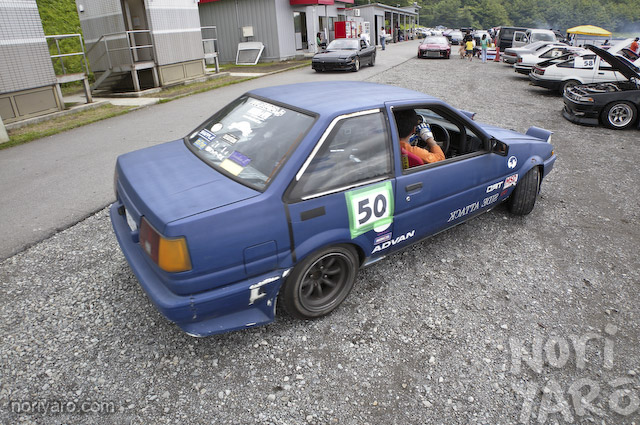 Riichan also made his 86 into a fake four-door with some black gaffer tape. 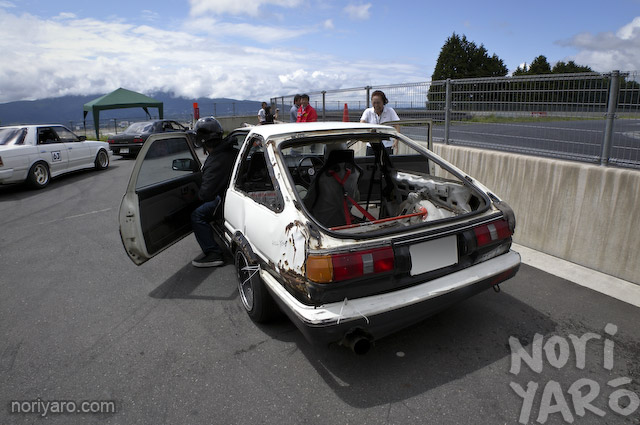 Goto-san was there with his borokakkoi 86 giving passenger rides. I don’t think I’ve mentioned Goto-san before, but he is one of the most ridiculous drivers I’ve ever seen. His 86 is covered in rust and dents from nose to tail, but he can drift within millimetres of anyone. 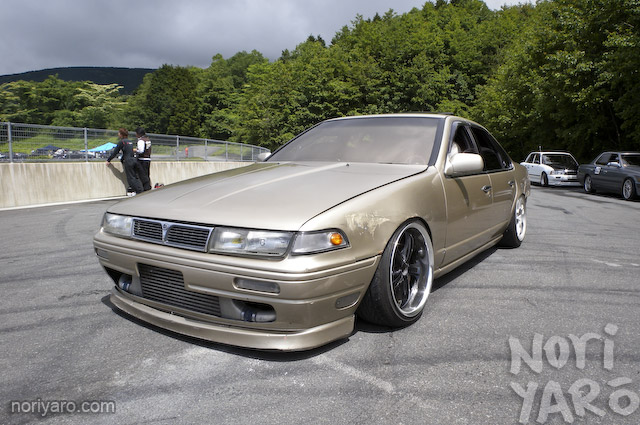 Hachioji is one of those cities that has a bit of a rough reputation. As a result, the look of most of the cars that come from there have a bit of a bosozoku-style influence to them. In this case, that means extremely low, tinted front windows… 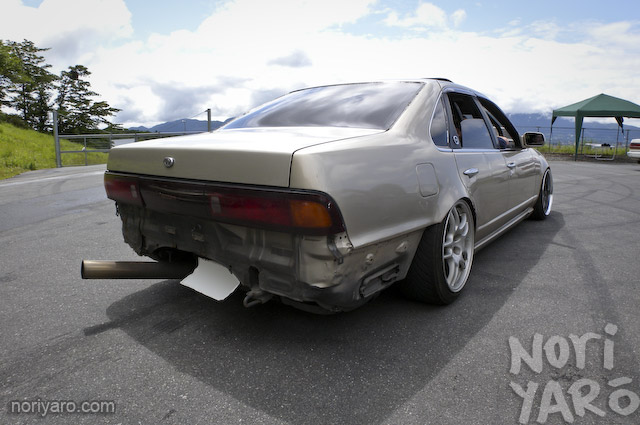 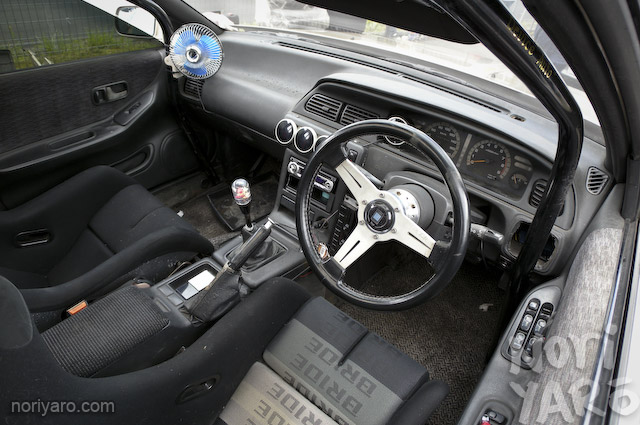 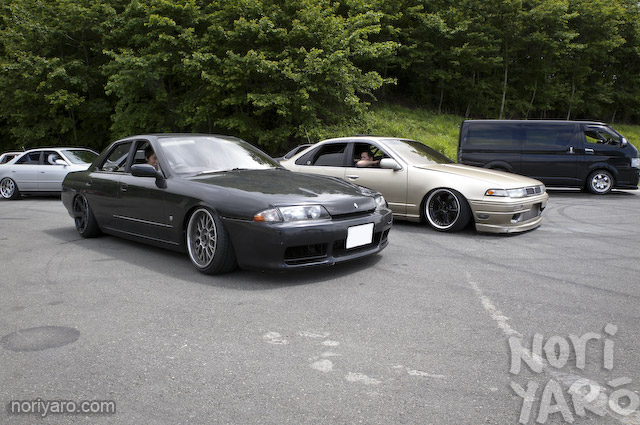 His mate in the 32 (who was a big help later in the day) was even lower. 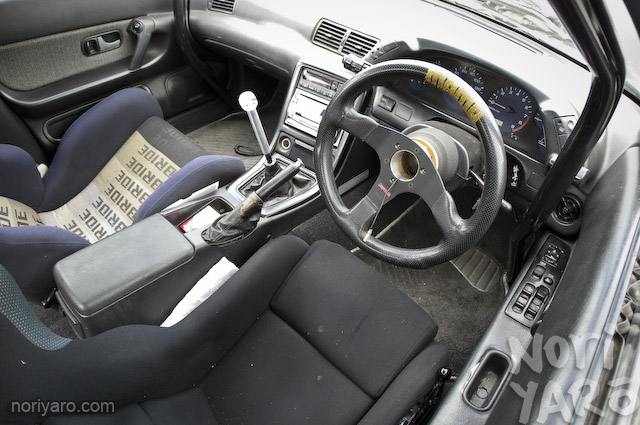 It’s hard to see, but that’s a clear die (as in dice) on the top of the shift lever. 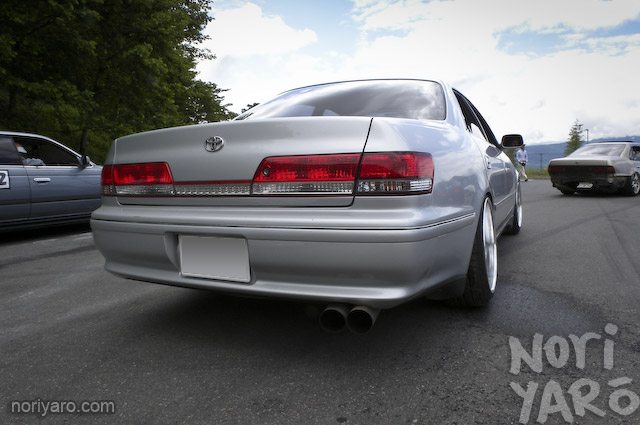 Who needs adjustable camber arms? Most of these guys just drift for fun rather than trying to get too extreme with their technique, so looking good is just as important as driving well. 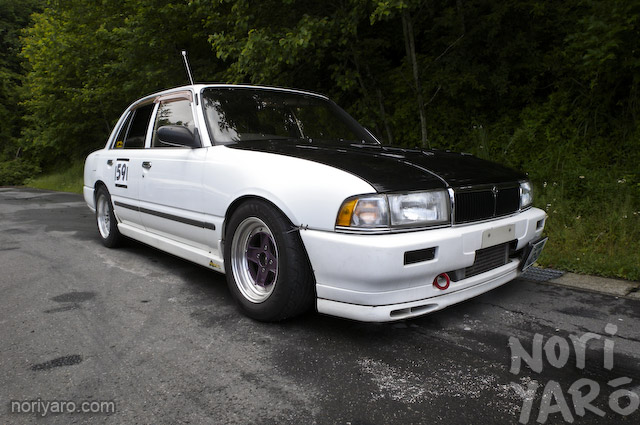 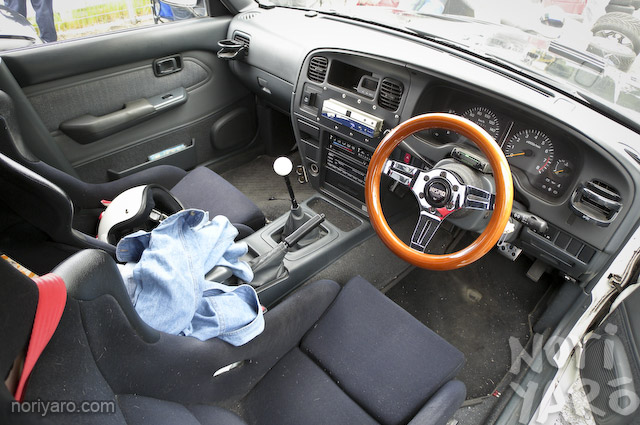 Here’s an even more suspicious-looking Crown. 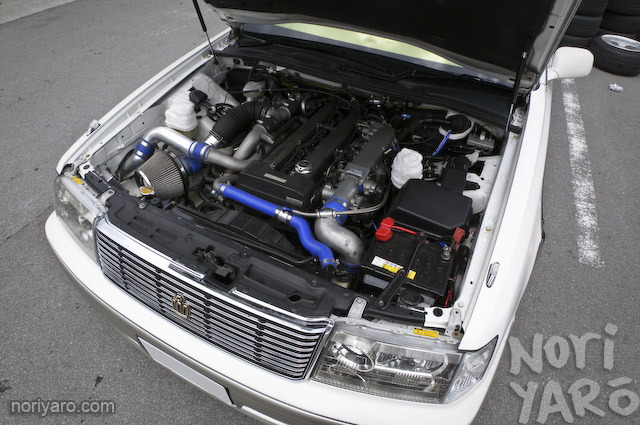 The engine and suspension were all swapped for JZX90 parts! 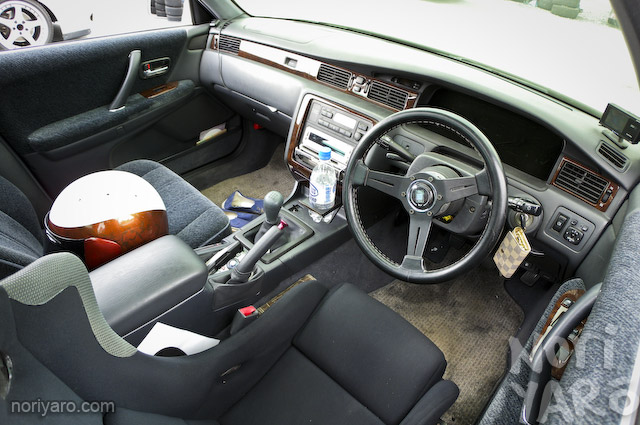 That included a manual conversion, with the proper trim pieces to match! Of course, the Crown is a ridiculously overweight oil-tanker of a drift car, but it sure does look cool. 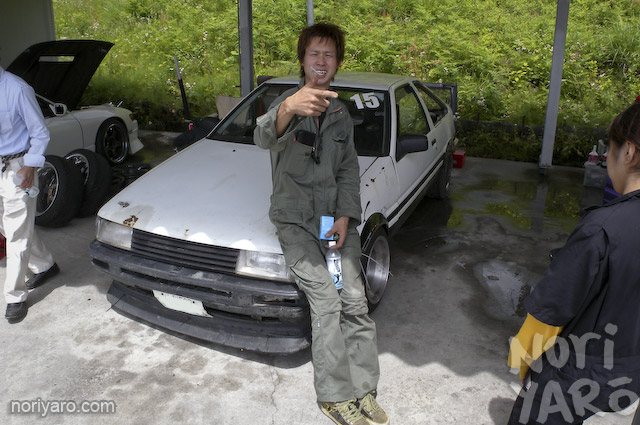 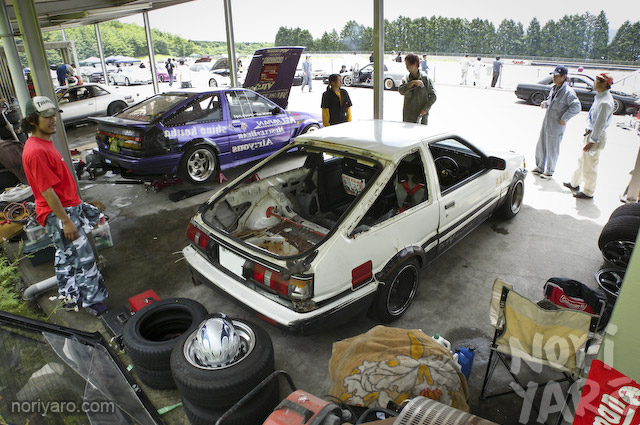 Only a guy who drives like him can get away with having such a dodgy car. He drove it to the track with a rear hatch and windows attached with numberplates on it. I asked if he actually had registration.

He said “Of course not.”

Team Orange’s Naoto Suenaga wrote that on there. Goto’s not sure what he meant by it though. 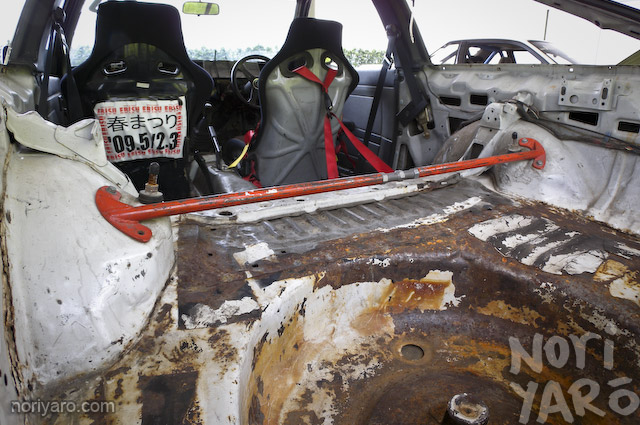 I can hear hachi owners weeping from here. 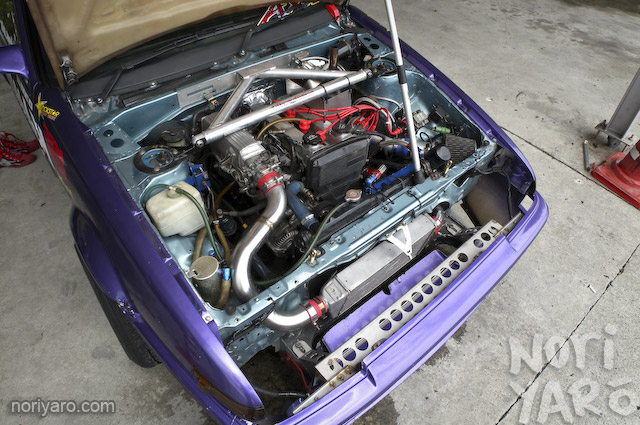 Akai-san’s 86 is a little bit nicer though, with the new turbo conversion performing rather nicely. 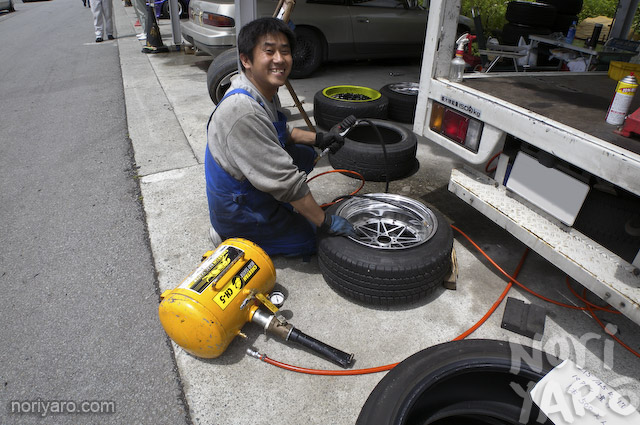 Tyre Garage Pao’s Umi-chan was there working the tyre machine. A few seconds before this picture was taken, he was blasting a tyre onto that Equip 03 with the Cheetah tank sitting next to him. 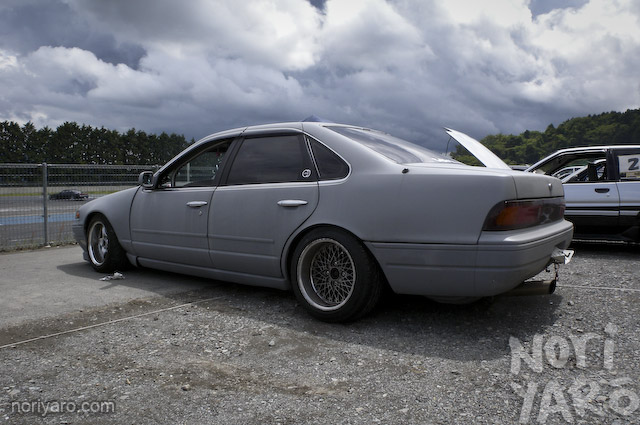 The weather was looking about as grey as this Cefiro.

That was such a lame caption… 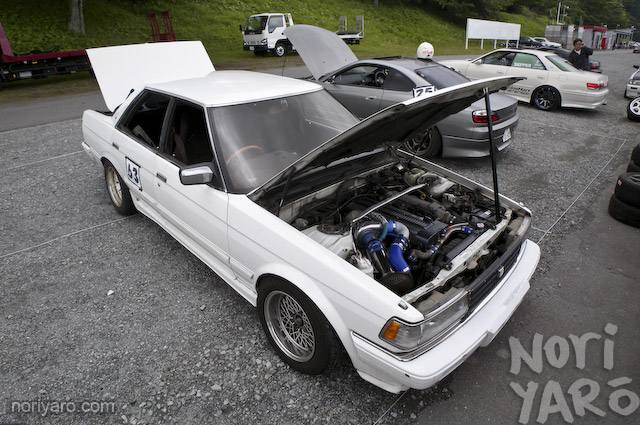 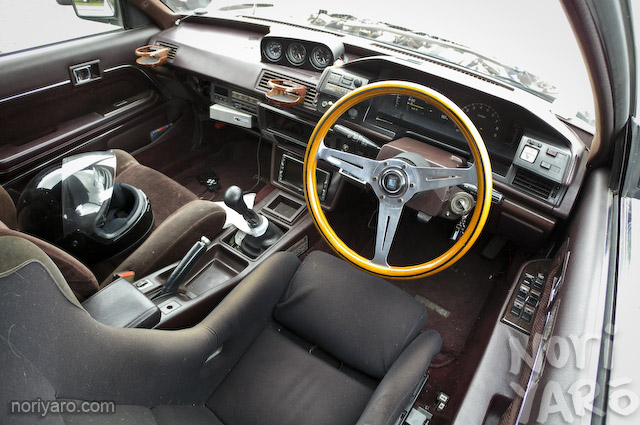 Quite an appropriate steering wheel. 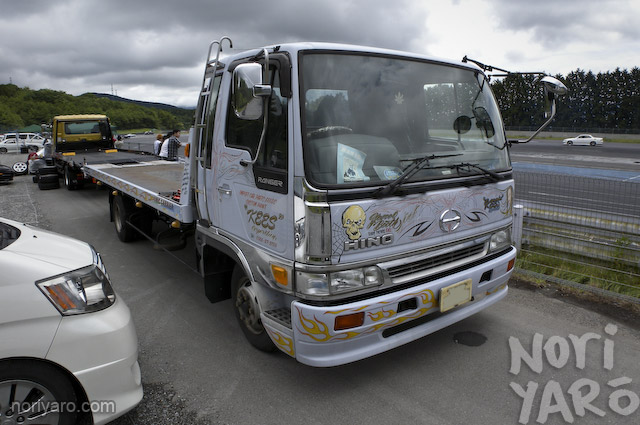 If you’re going to drive a flat-bed tow truck, it really should be pinstriped with skulls and flames on it. 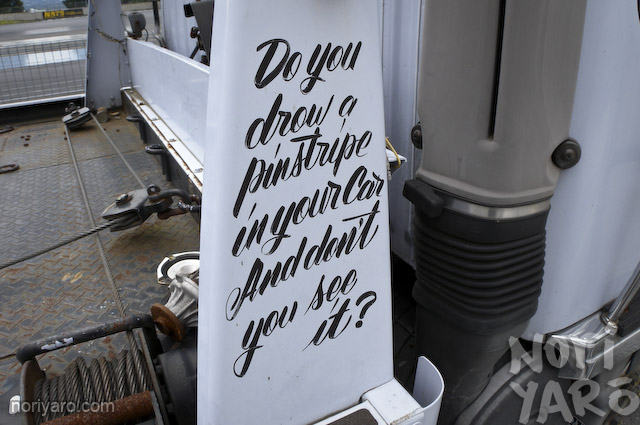 I think I understand…

Here’s something straight out of 1991. A 180SX with Racing Hart and Watanabe wheels

For lunch, all drivers were given a complimentary Fuji Speedway bento box. 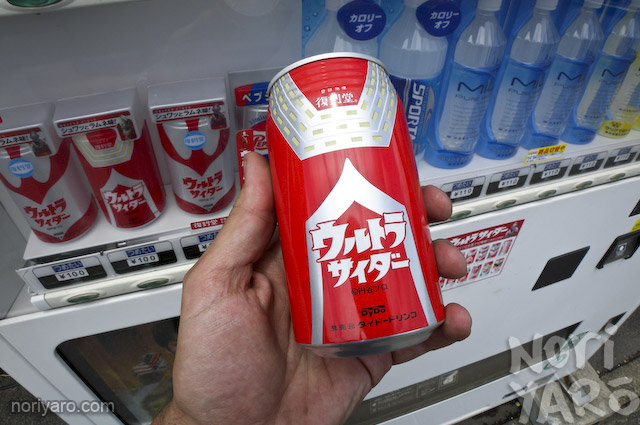 Ultra Cider! This stuff if basically Ultraman-branded “cider”, which is more or less the generic name for the Japanese version of Sprite. The most commonly-known brand of this kind of drink is called “Mitsuya Cider”.