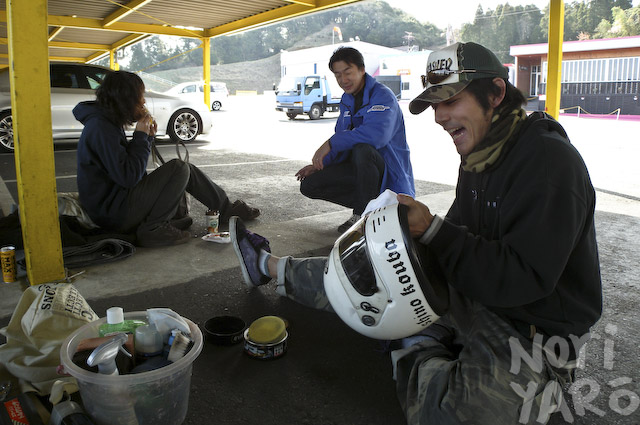 Shino and Ken Satoh were the “Tokyo Drifters”, and Tomo Akai also came along to help Shino out. 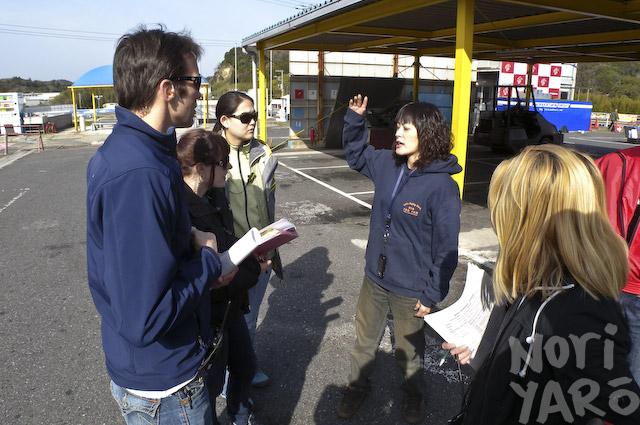 Shino, here talking to some of the really friendly production crew, had to learn a few lines for her introduction. I told her that it didn’t really matter if they weren’t perfect, since sounding “Japanese” is probably a good thing on this show. 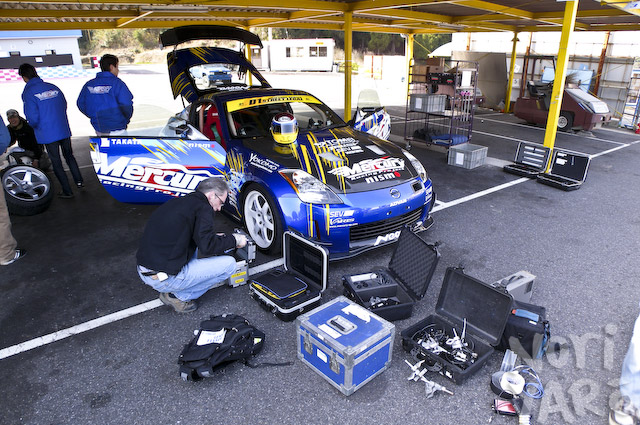 Ken’s car was this Fairlady Z, which actually belongs to a customer of the Mercury workshop. I saw one of the producers turn an interesting shade of white when Ken said that he had never drifted this car before. I quickly reassured the guy that Ken could probably drift the bus they drove to get there if he wanted to. 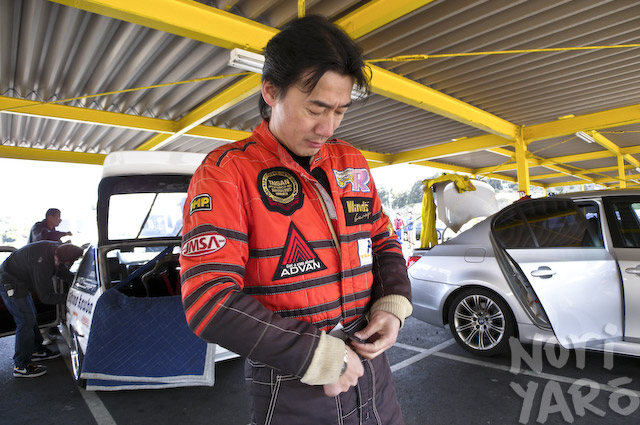 To look a bit more professional, Ken borrowed a racing suit from a friend of his, and former GT racer, Aoto-san. 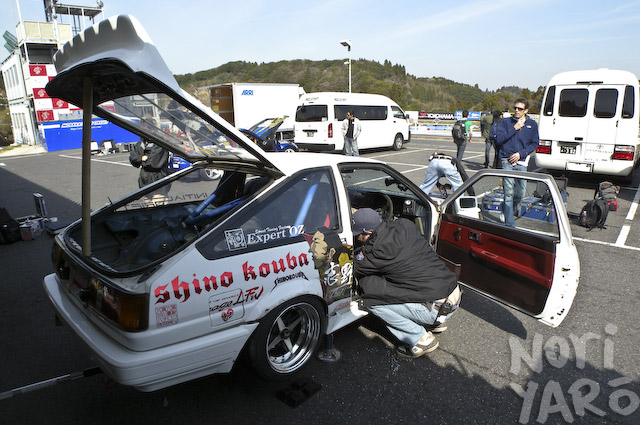 Shino doesn’t usually run 15-inch wheels on her car, but for the shoot, she broke out her Equips. Unfortunately, she hit a curb during one of the hot laps and bent the lip! 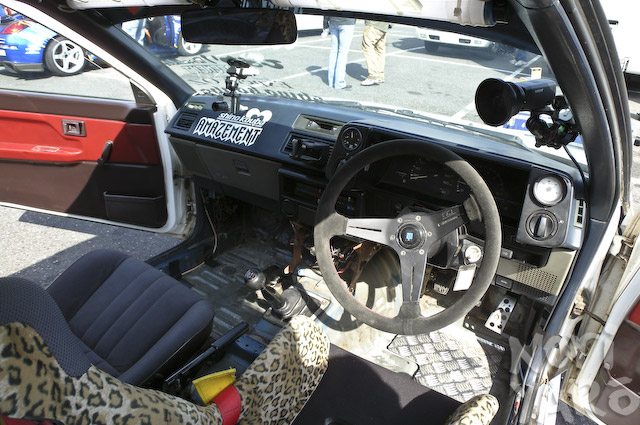 Both of the cars were crammed full of camera equipment. The camera crews probably had never set up a race car with cameras before and didn’t really install a lot of their equipment as securely as they needed to. One of the DVCPROHD decks actually spat out the tape in all the bumping around! I swear I saw a sandbag in the back of Shino’s car. After a few warm-up laps, they sorted everything out though. 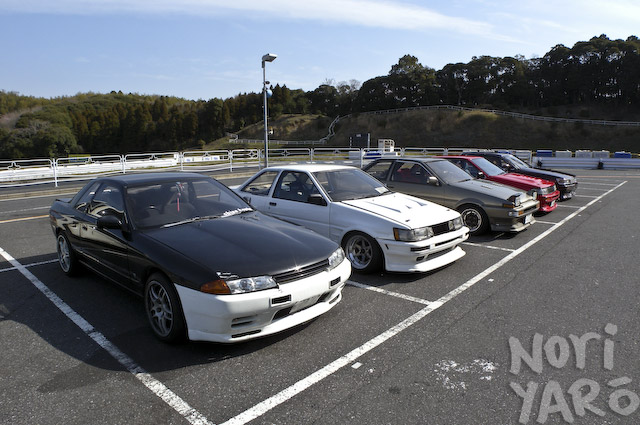 Some of Ken’s Mercury crew came along to watch as well. 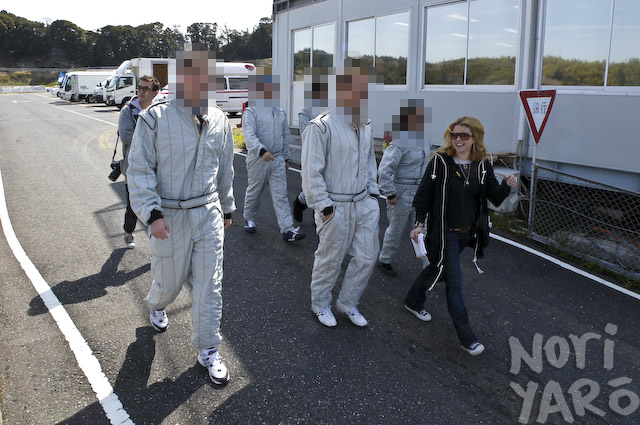 Oops, can’t give away who actually makes it to this episode! One of the crew, Margaret (on the right), was kind of cute, so I’ll leave her face in. 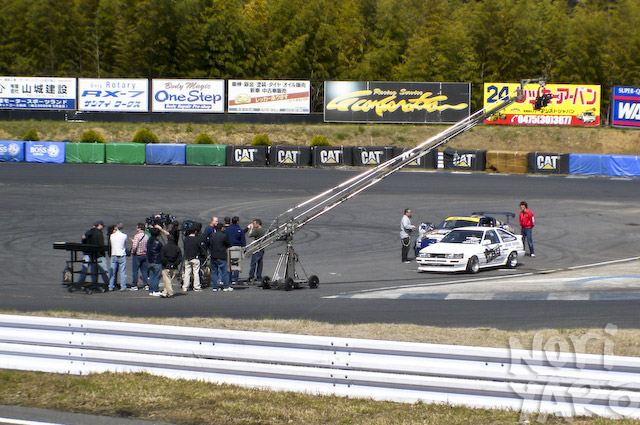 The boom shots should look pretty good. When they drifted in and spun to a stop in front of the crew, Ken missed Shino’s car by what looked like centimetres, so it should be interesting to see how it turns out.

The new series of the show is starting on June 24th on ABC, but I’m not too sure when this episode will be on. The reward segments are on the second half of the show, so make sure to check it out. 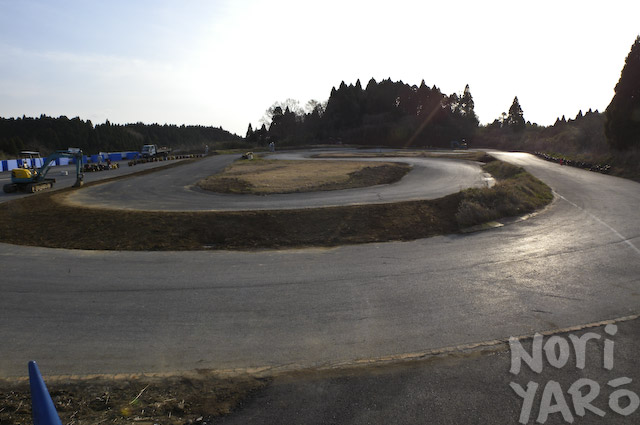 After the crew had finished filming, we all headed over to nearby Minami Chiba circuit.

The main circuit is undergoing some renovations, and is opening back up soon. We played around with some cones on the skidpan for a few hours, which was fun. Never underestimate how much you can learn on a flat piece of ground with some cones, especially when you have a driver as good as Ken Satoh watching, and telling you things like “OK, that was good, now go and do it again with no handbrake”. 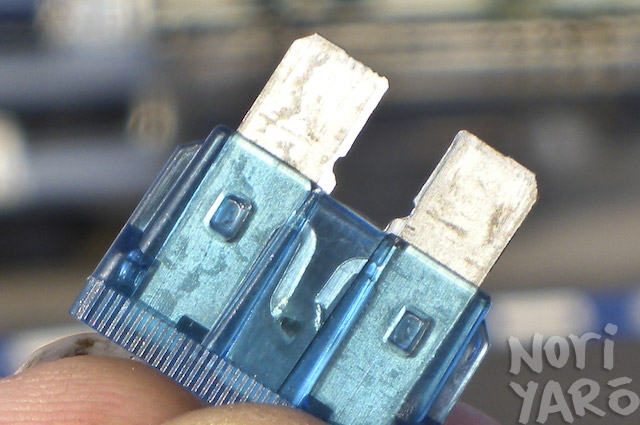 After one run, I pulled up and the engine died and wouldn’t start again. It would crank and spark and kind of sputter then die, but after a couple of goes, all it would do was crank. I suddenly remembered that I still haven’t changed the fuel filter since I bought the car, but then tried to listen and see if the fuel pump was actually working.

Luckily, it was just the fuel pump fuse. Unluckily, this means something is shorting somewhere…