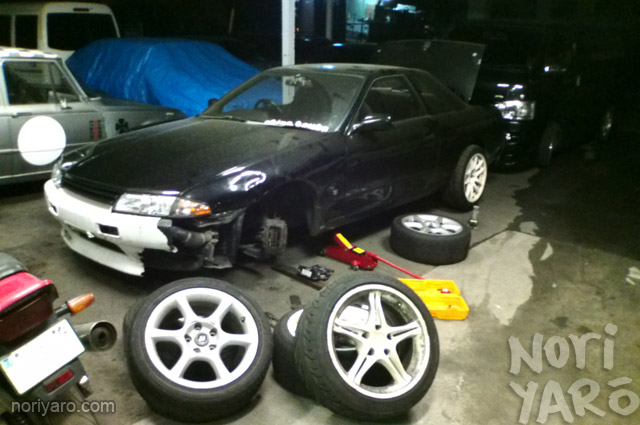 END_OF_DOCUMENT_TOKEN_TO_BE_REPLACED

UPDATED EVERY WEEKDAY: “Every” means “occasional”

Yes, I’ve missed quite a few posts recently, so I apologise to all of you who look forward to a daily Noriyaro fix.

Odaiba D1 took up the whole weekend, most of last week was extremely busy, and this week so far has been the same. Writing lots of words, going through lots of photos, and spending eight hours doing a what should be a one-hour job on the Skyline. On the upside, I took it to Nikko Circuit today for a Winds Auto drift event, so I feel a bit better after standing there being teased by watching other people drift all weekend.

Speaking of that, if you’re wondering why there’s been no report on Odaiba D1, that’s because it was sold to a magazine just like the Ebisu D1. Yep, I’m a sell-out, but I still have plenty of interesting photos to put up that go beyond the usual “drift car sideways with a crowd in the background”, so look forward to that.

One cool little thing that happened at D1 was that Ryuusuke Kawasaki, the editor of Drift Tengoku magazine (AKA “The Bible”), said he found my website and really liked the photography. Nice.

Also, it was cool to meet Zhandos, a reader of Noriyaro who came all the way from Kazakhstan to watch D1.

Tomorrow is a “sitting on the computer and doing proper work” day, so look forward to some new content soon.

Comments Off on UPDATED EVERY WEEKDAY: “Every” means “occasional”

END_OF_DOCUMENT_TOKEN_TO_BE_REPLACED

I’M NOT TYPING ALL OF THAT AGAIN: Off to Ebisu for the weekend

Damn it, I just wrote a big post about stuff that has happened in the past few days, but then I went to save it, and it failed.

Anyway, short version is that I’m going to the Ebisu Spring Drift Festival this weekend. No post tomorrow, but expect something on Monday night or Tuesday morning.

My housemate Yoshio was just flicking around some cable TV channels, and found a show about the recent Ebisu D1 round on J-Sports channel. D1 is on television now!

Yep, that’s Kunny, but who’s that over on the far right staring intently at his camera screen?