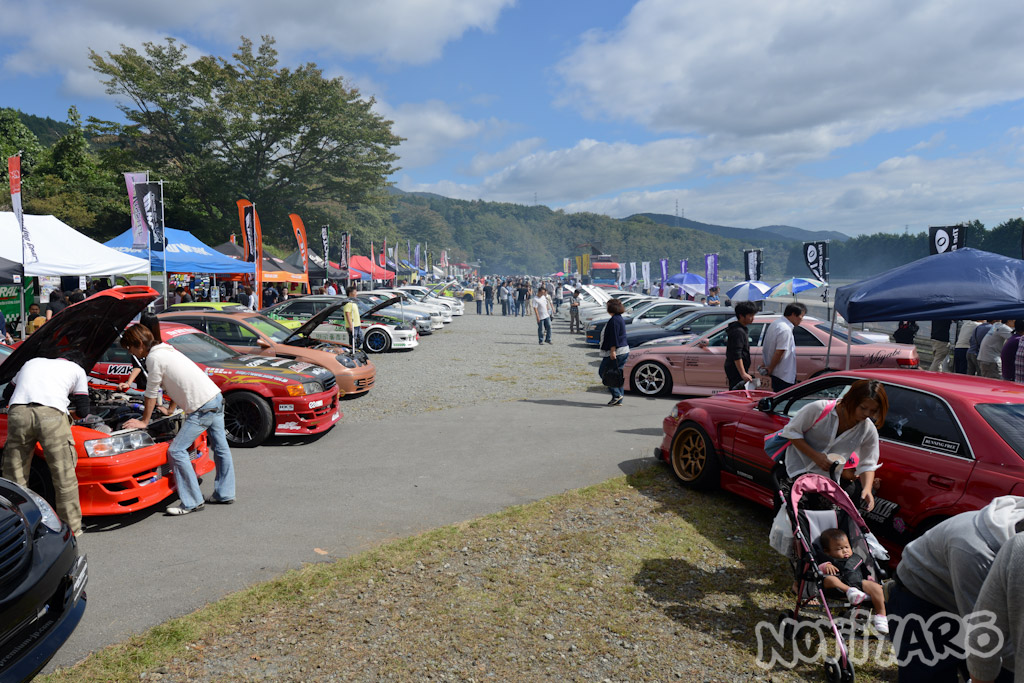 First, we’ll walk down the pit area of the Fuji Speedway Drift Course, starting with the dealer display cars. 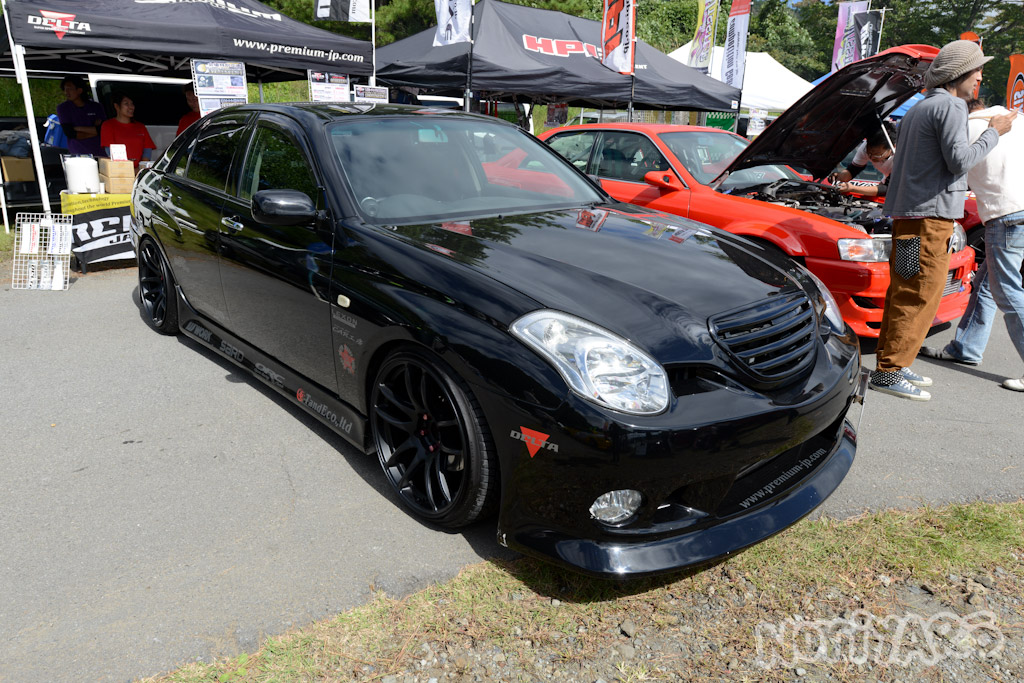 The rolling statement itself, the Toyota Verossa. The statement is left up to the viewer to decide upon. 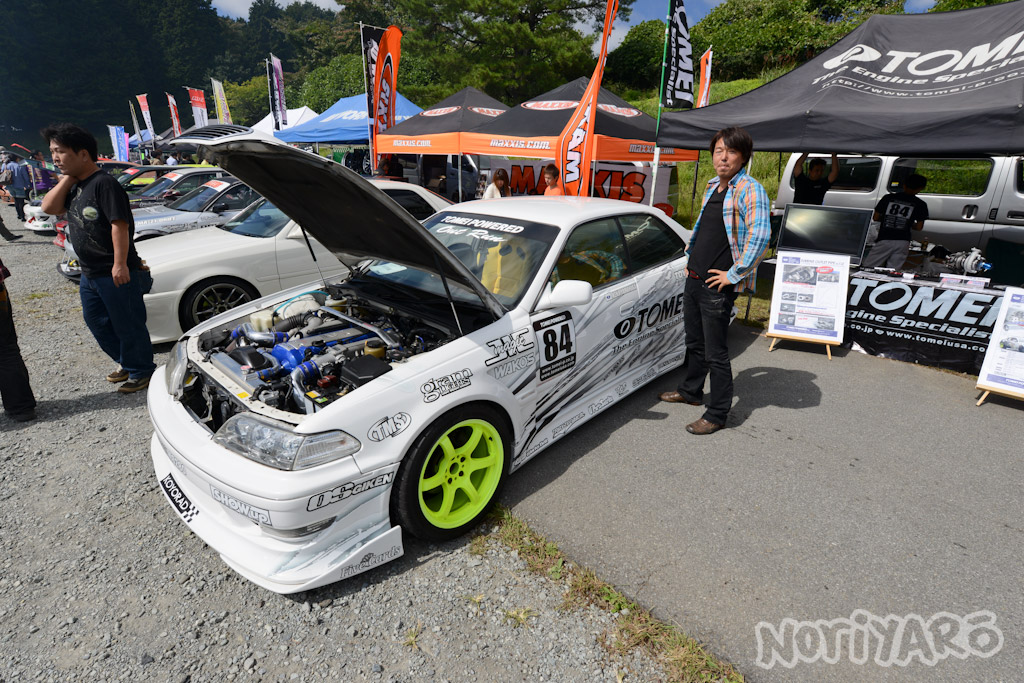 I had to wake up Kenji Yamanaka to come and pose next to his demo car, which is fitted with lots of Tomei parts… 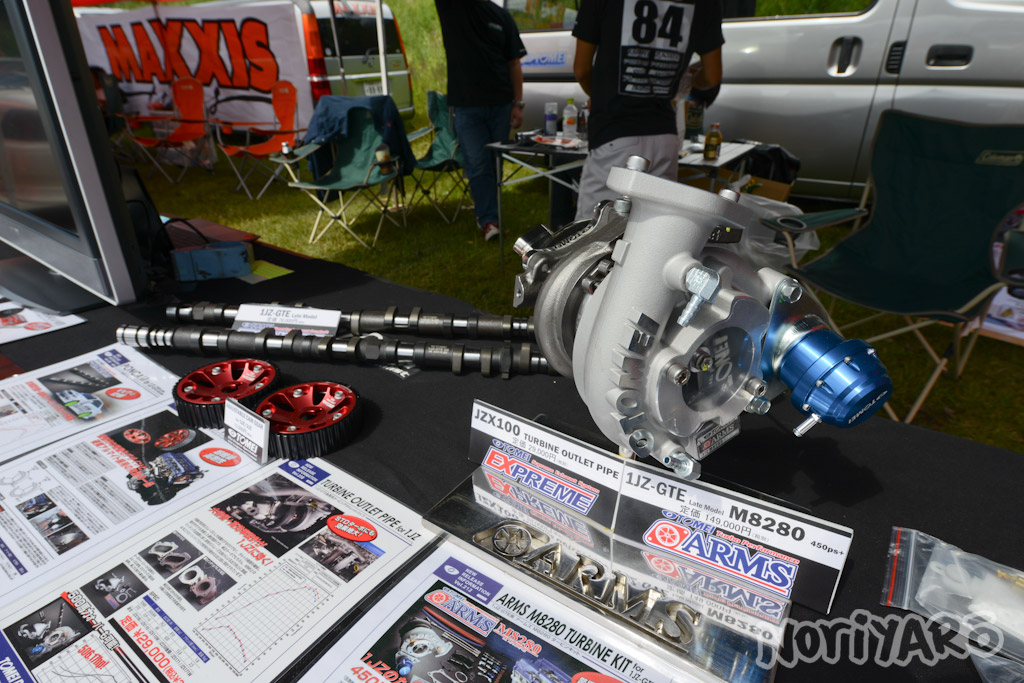 Here’s a bit of trivia: the Japanese word “pon” is an onomatopoeia for a light hitting sound, but it can also be used to describe bolt-on parts that require no extra settings. For example, “pon to tsukeru” would translate as “slap it on and use it” in English. 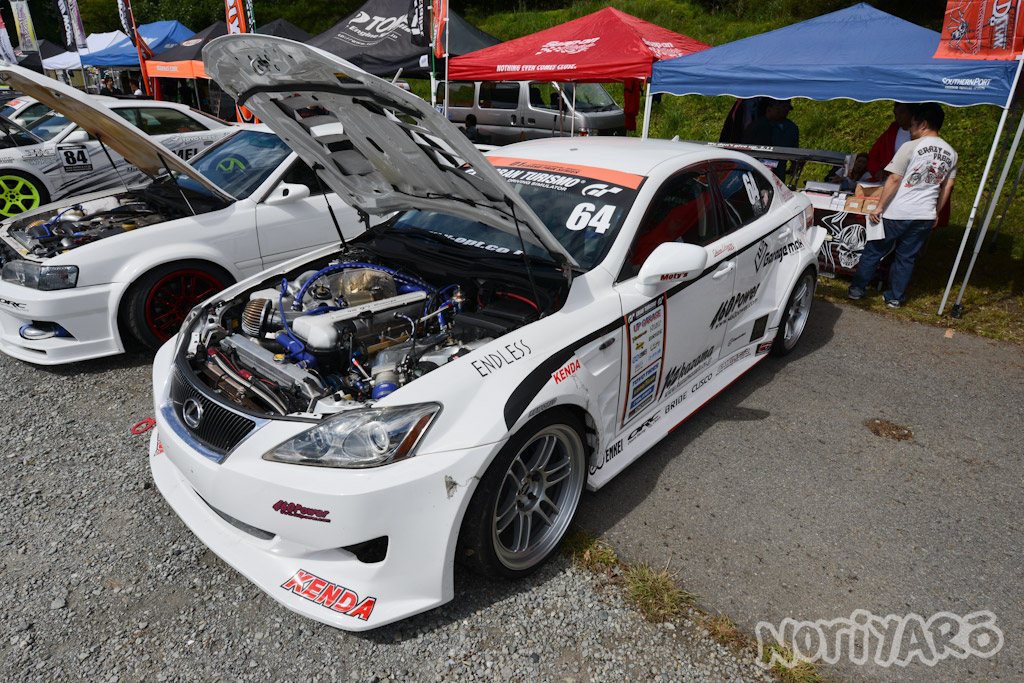 That doesn’t look like a 1JZ on this Lexus! 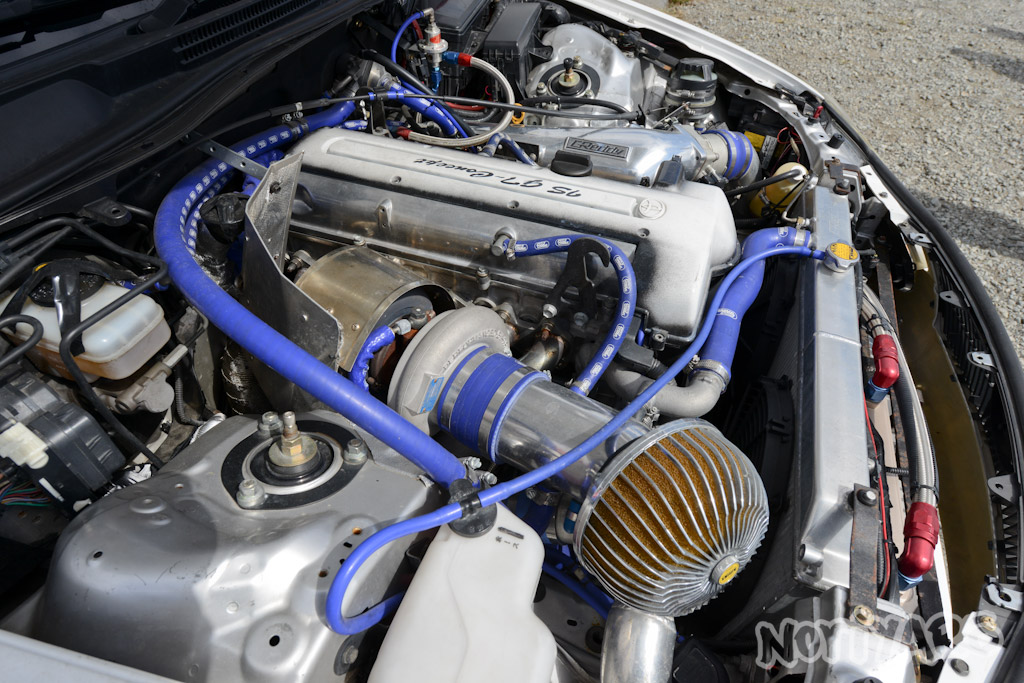 That’s no problem as the 1JZ meeting is open to any 2JZ-engined cars too.

White is a popular colour for Toyota sedans, and suits them well in my opinion. 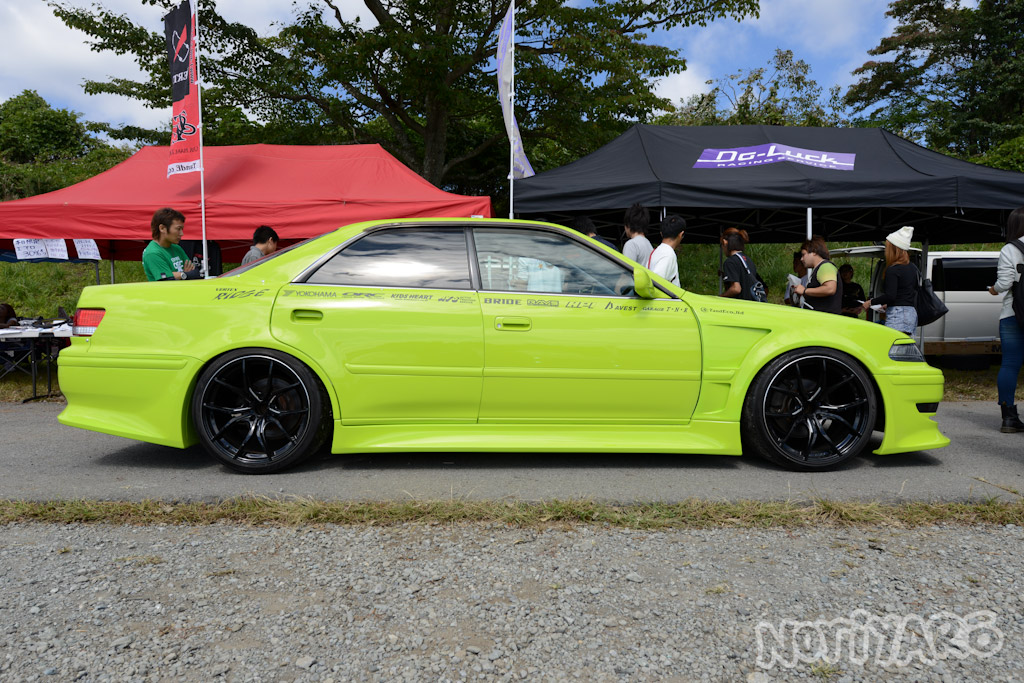 If white on standard bodywork is too understated, you could always go for acid-green on a Vertex Ridge bodykit and Rays 57 Motorsport wheels. 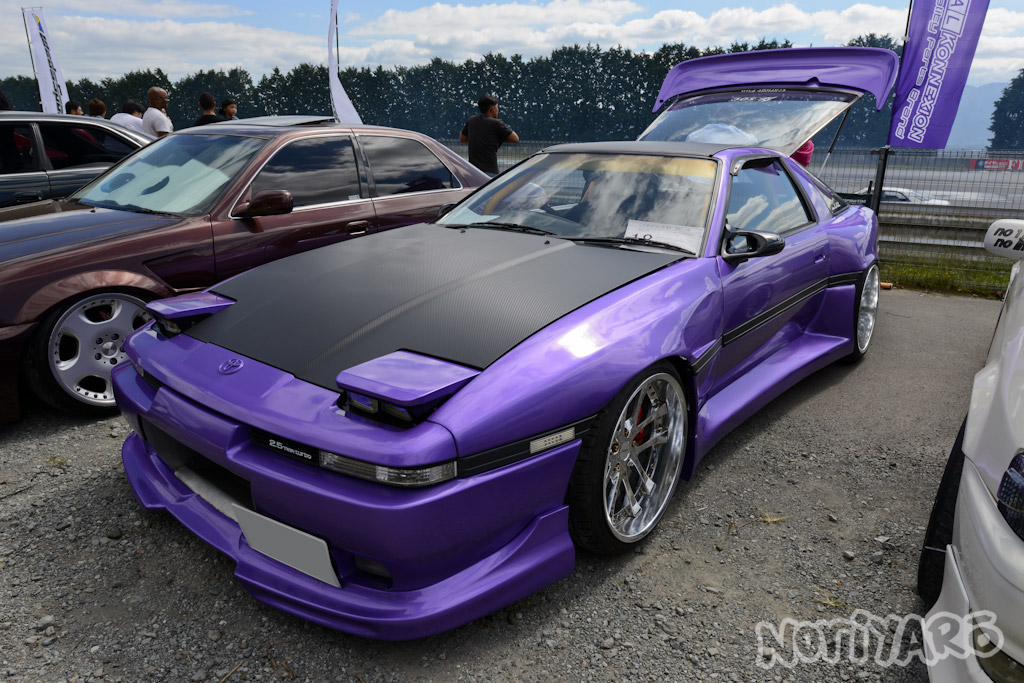 JZA70 Supras are still remarkably common in Japan, but not many of the ones you see are modified. 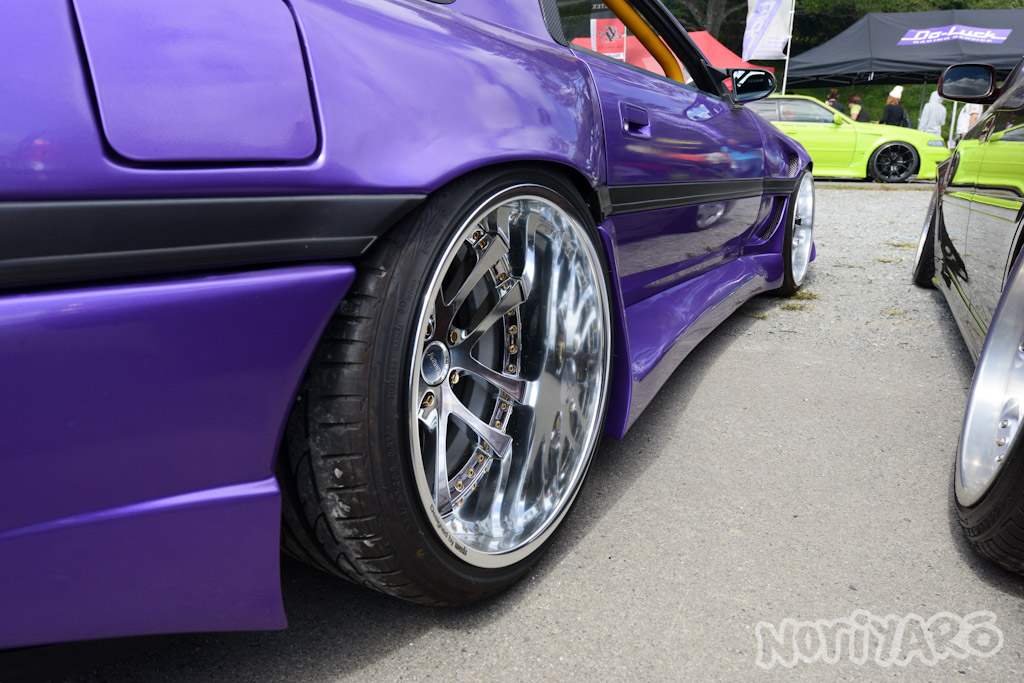 Unlike this one, of course. 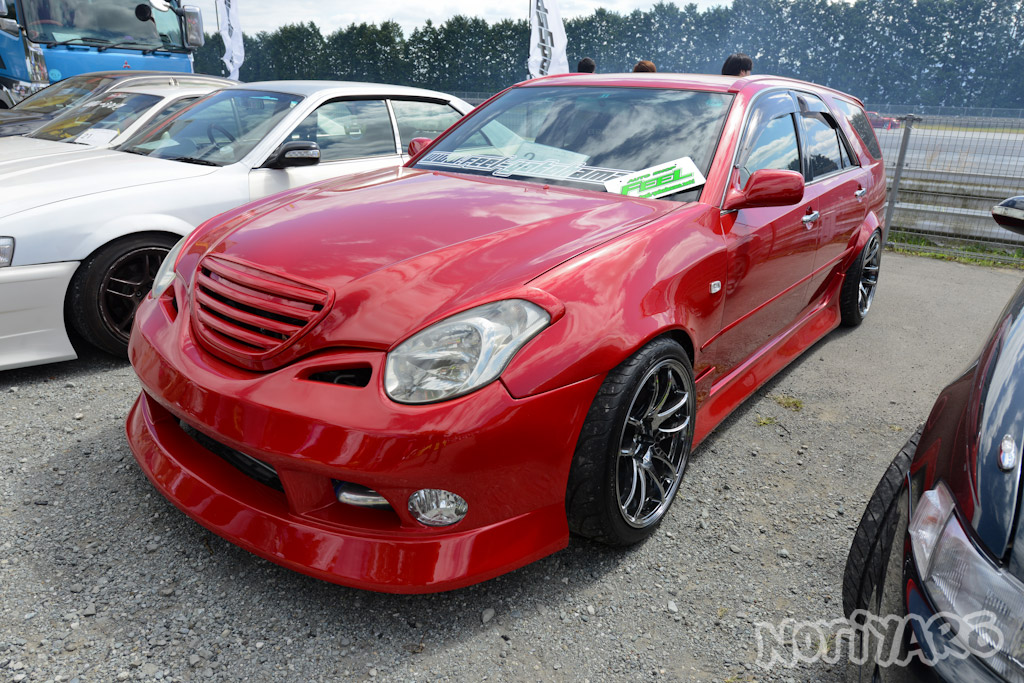 Another Verossa…but this appears to be an estate! They didn’t make a Verossa estate, did they? More on this in the next post. 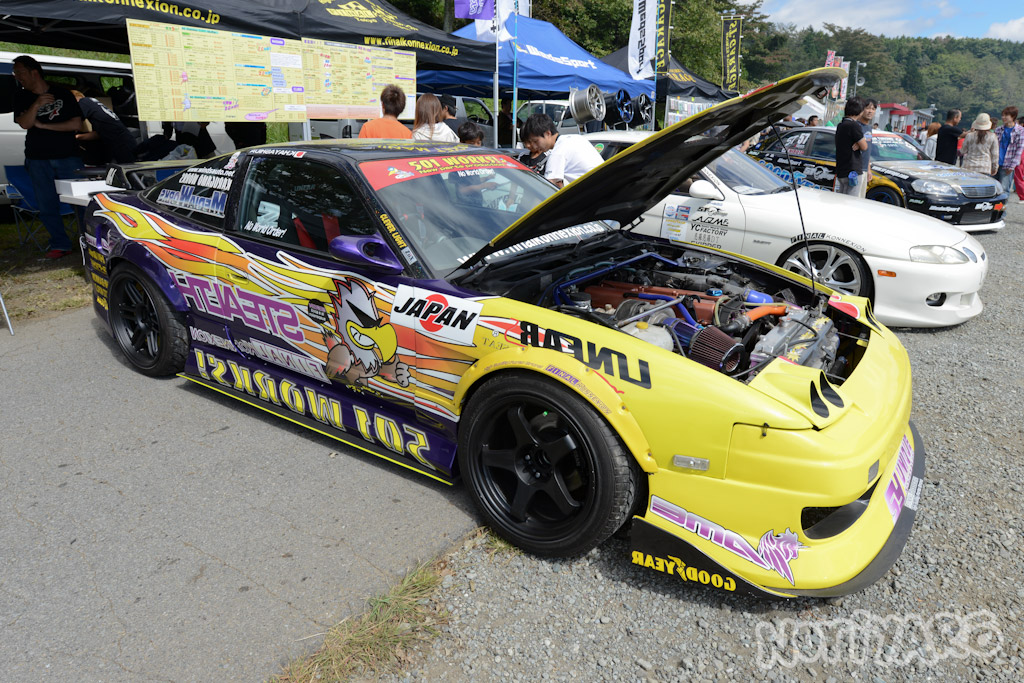 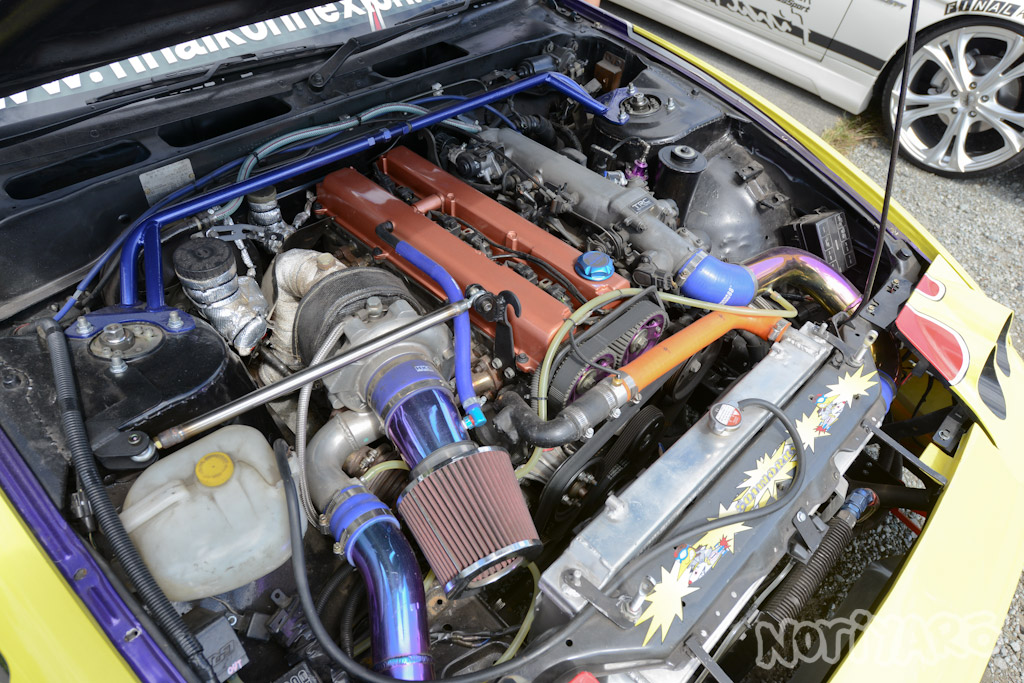 I see. Never mind. Carry on then. 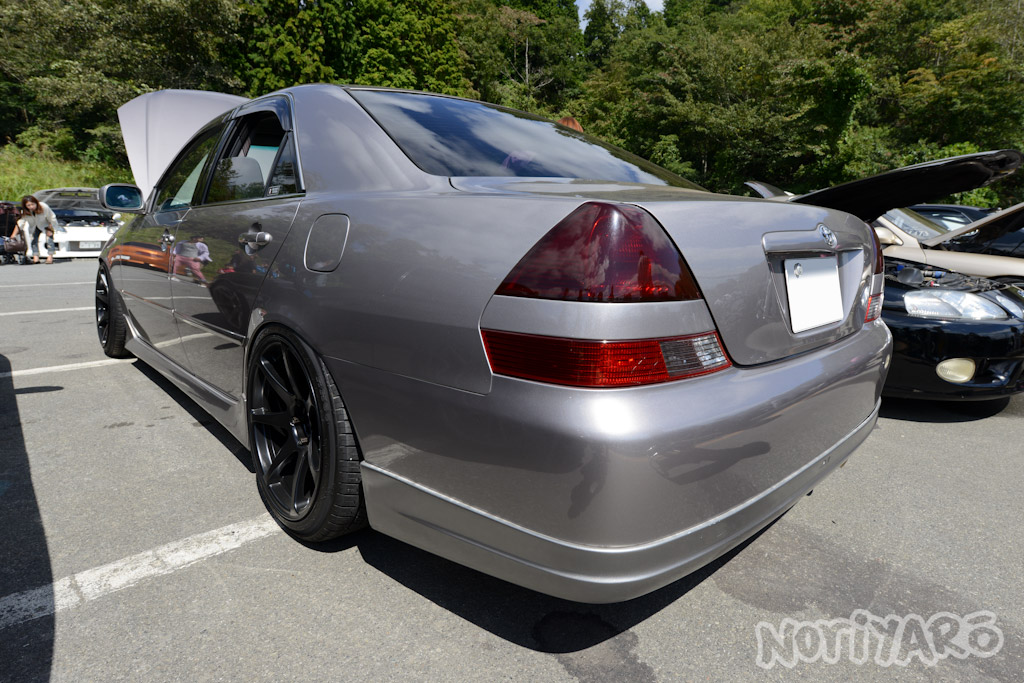 I quite liked this JZX110 in grey metallic. It didn’t look quite so nice at the end of the day though. More in another post. 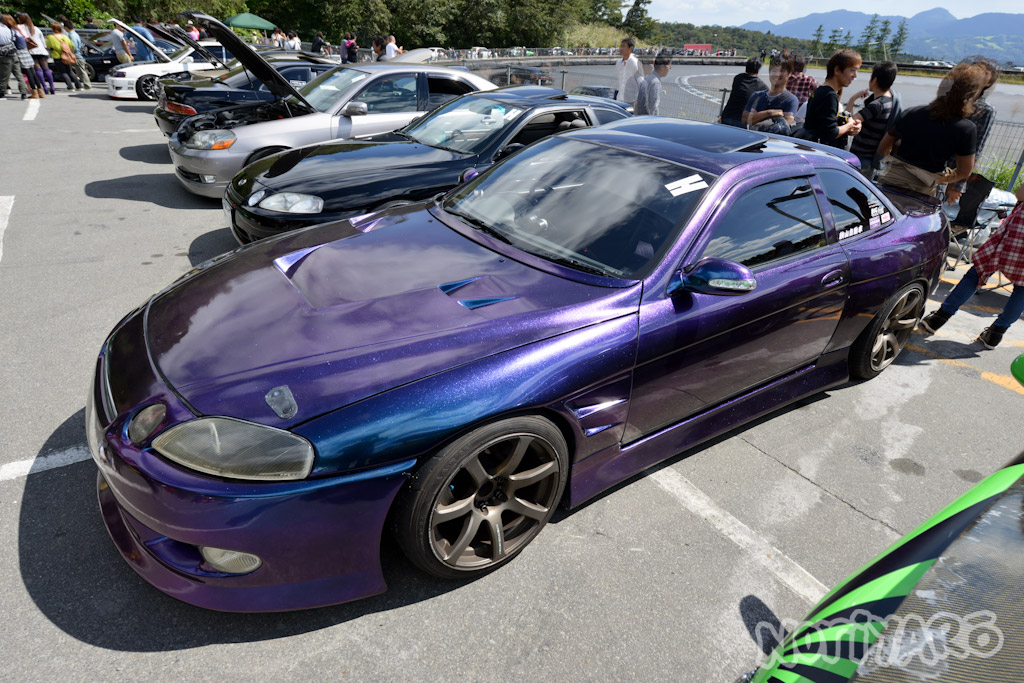 Soarers are also welcome at the 1JZ meeting. 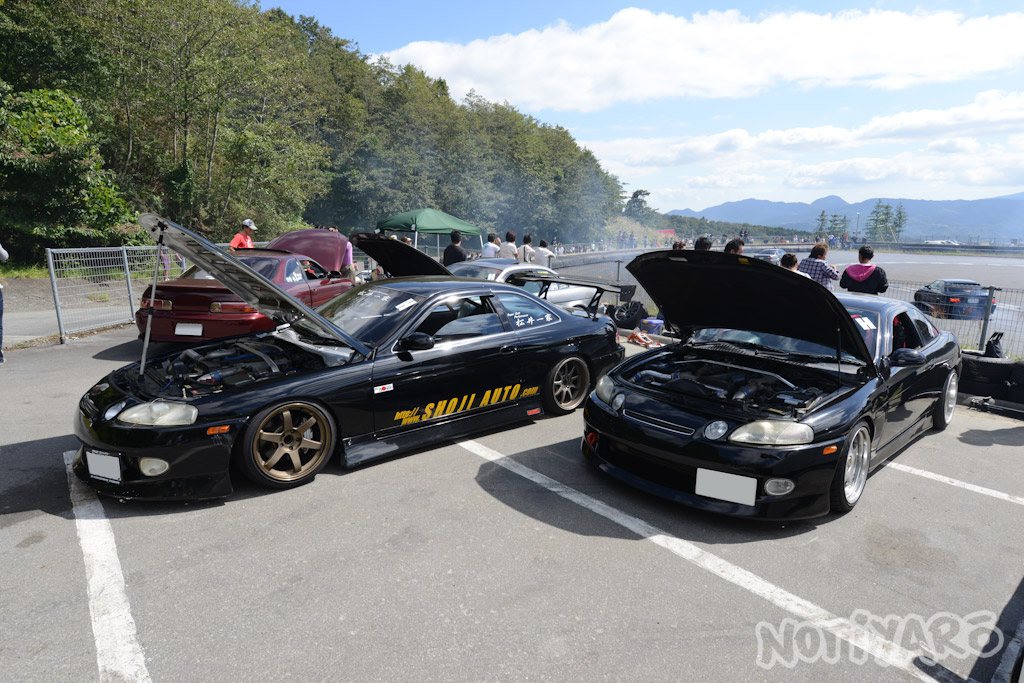 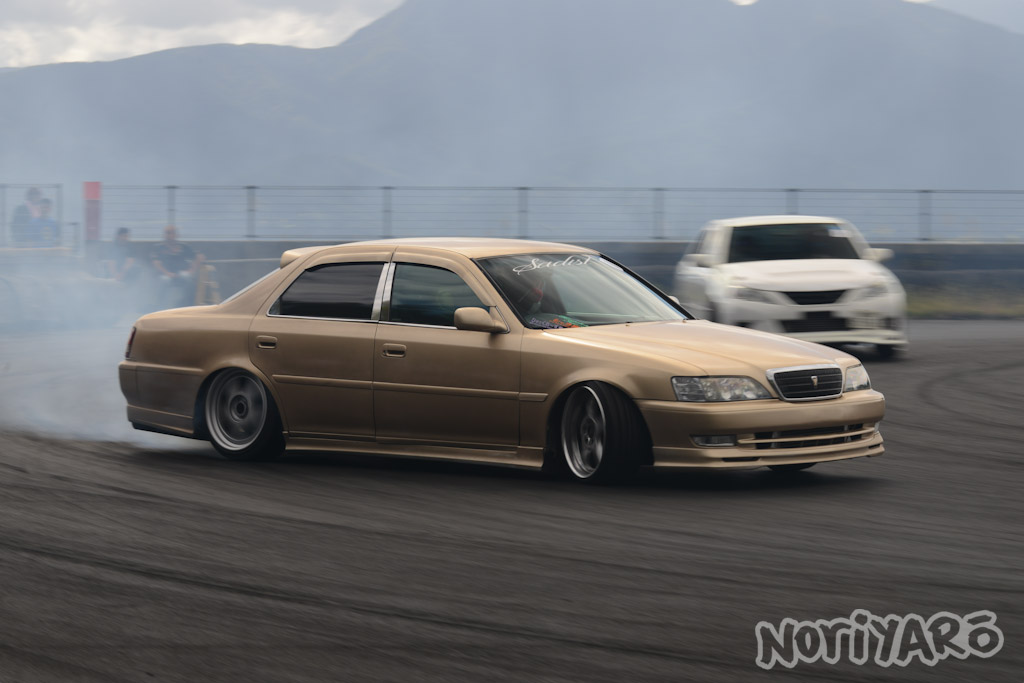 OK, so now we’ve walked all the way down the pits, we can watch some of the drifting from ground level. 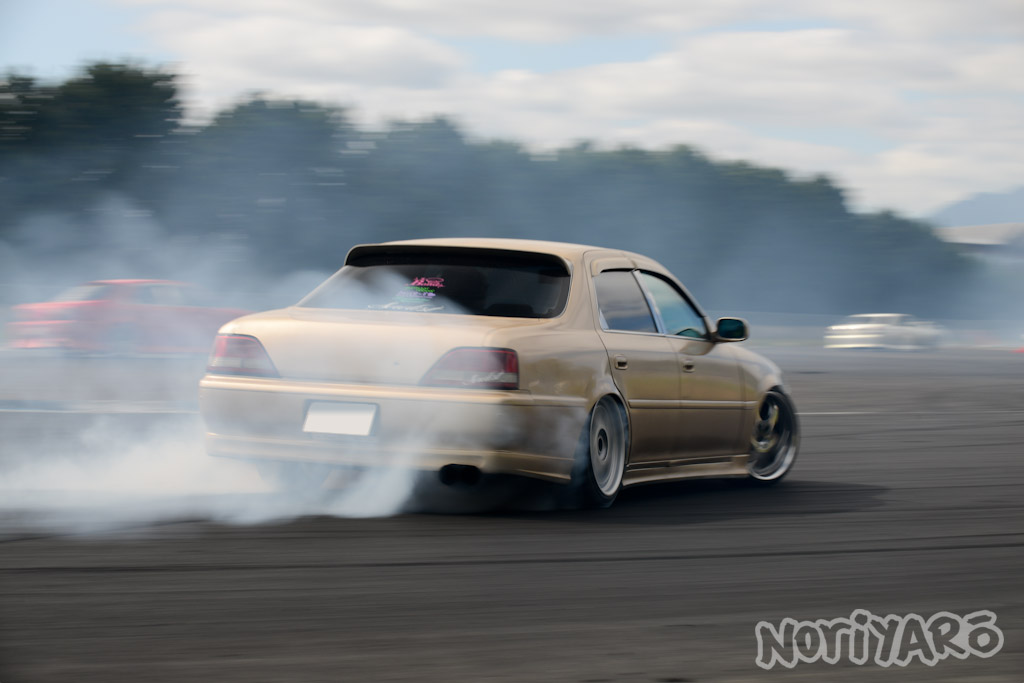 Zenki JZX100 Crestas have the most understated looks of the 100 series cars, especially the tail-lights. 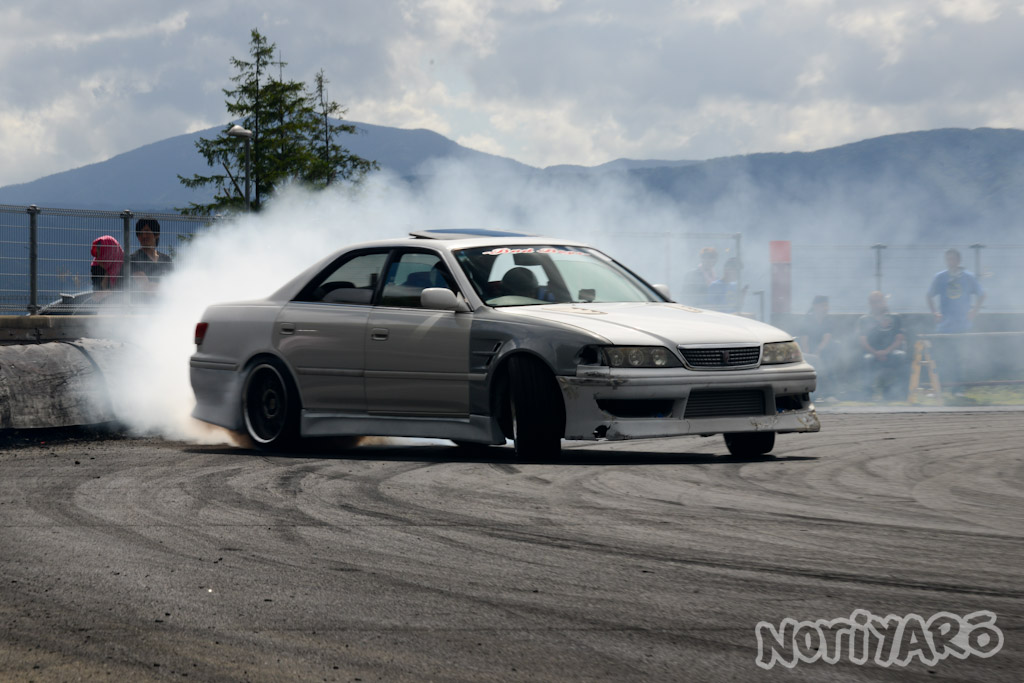 Personally, and this is a biased opinion of course, I like the Mark II! Maybe a little bit lower though… 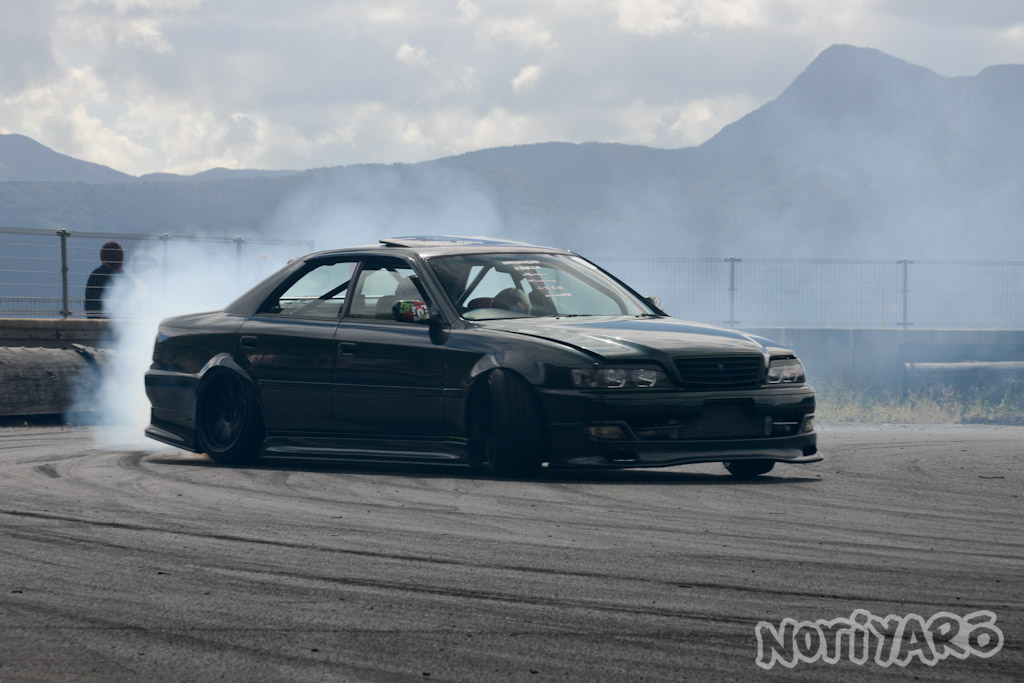 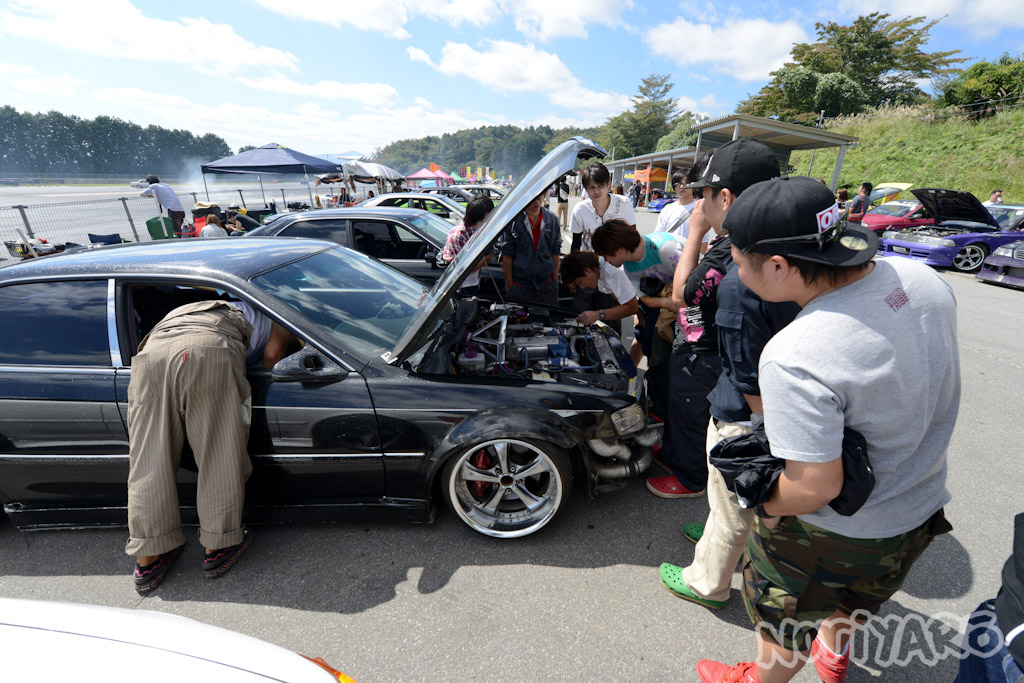 1JZs are a very reliable engine, but with the heat of the day and the thrashing they were taking, there was a problem here and there. 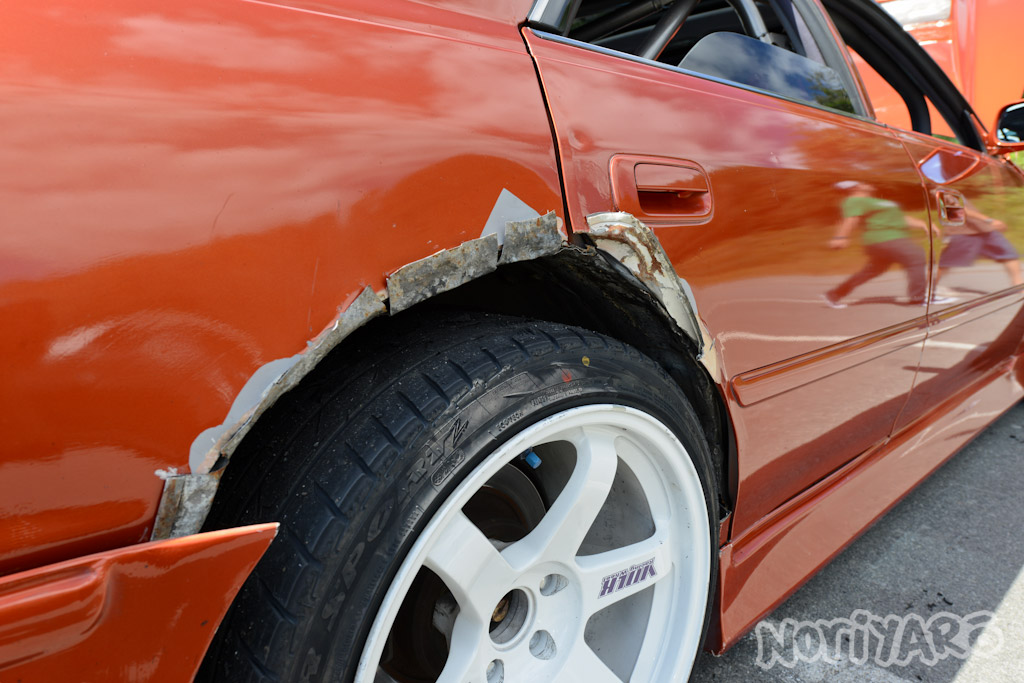 Somebody didn’t have time to finish his fenders properly before the event. This is about as far as you can take the arch of standard metal guards on a JZX100, as the door gets in the way a bit. 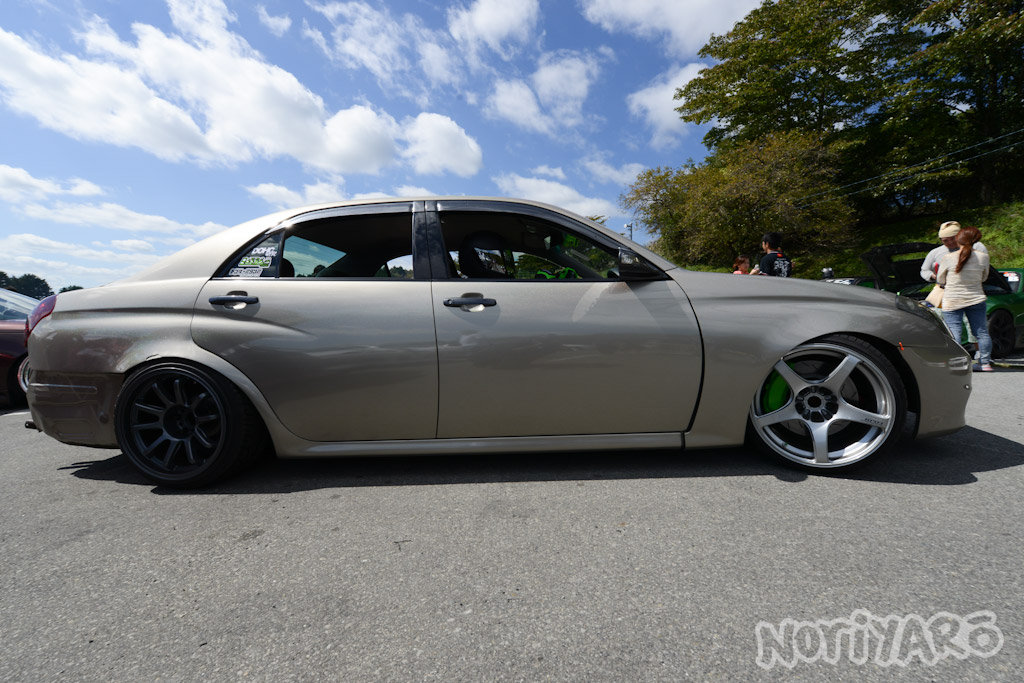 The fact that a standard-bodied Verossa looks awesome when slammed says something about the design. 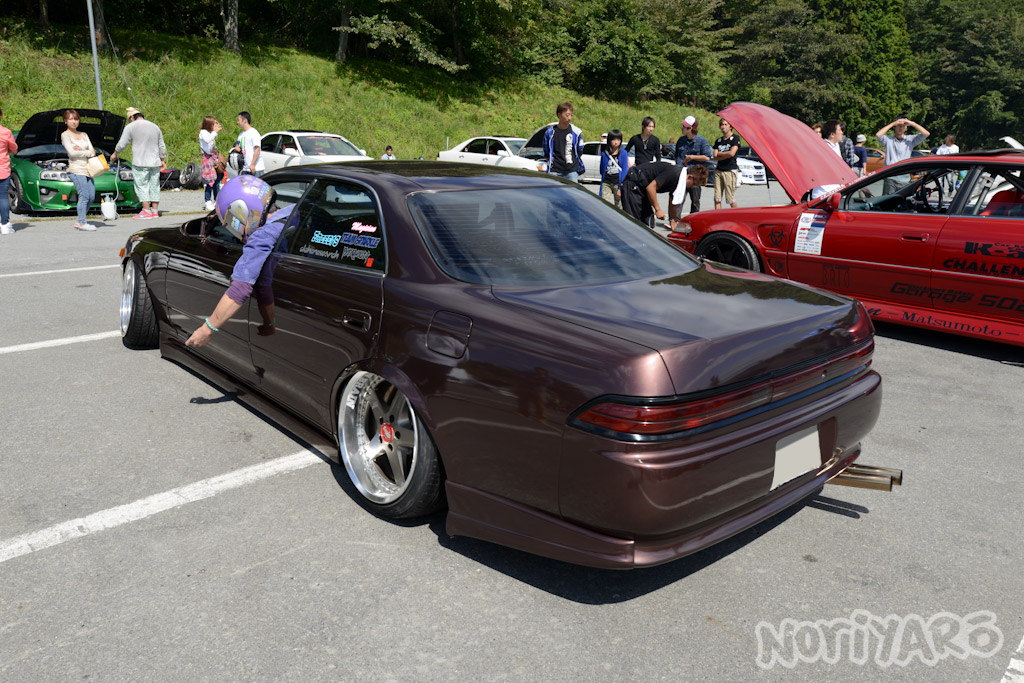 Same goes for the JZX90 Mark II. Lips do always help a bit though. 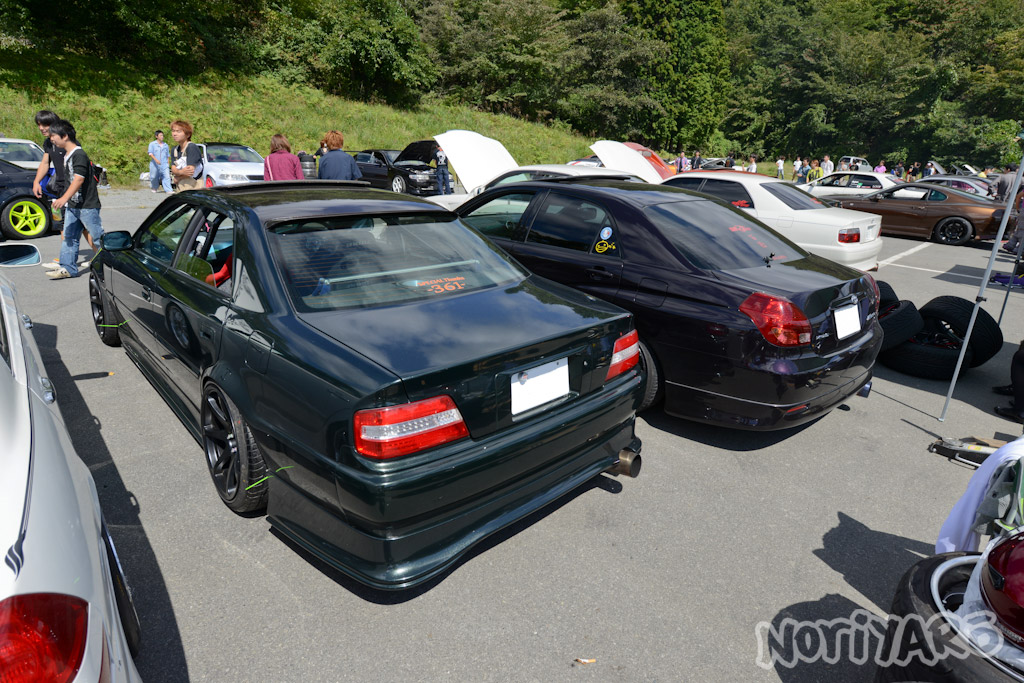 No matter your preference, there’s a RWD Toyota sedan to suit your styling tastes. 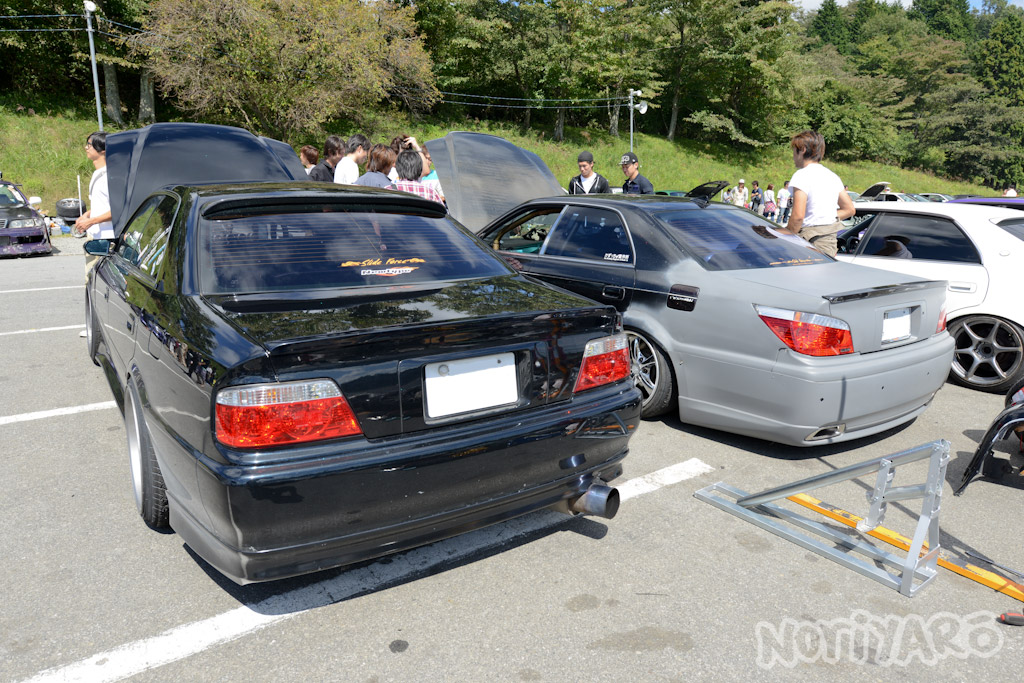 You can really see the influence that the shape of mid-90s BMWs had on the design of the JZX100. 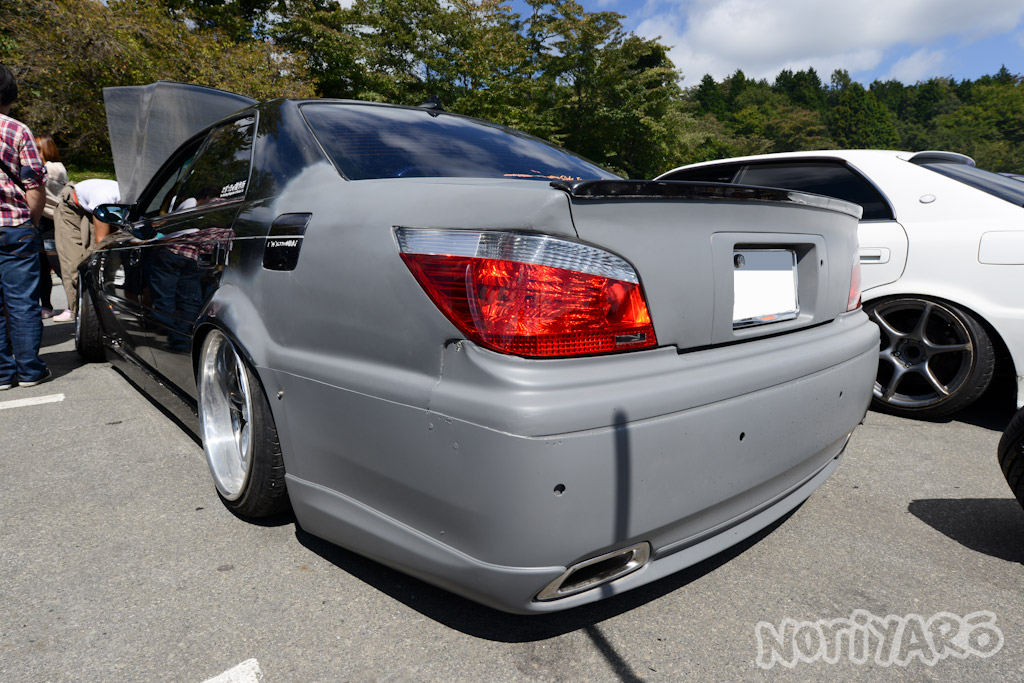 This Chaser actually does have BMW tail-lights! 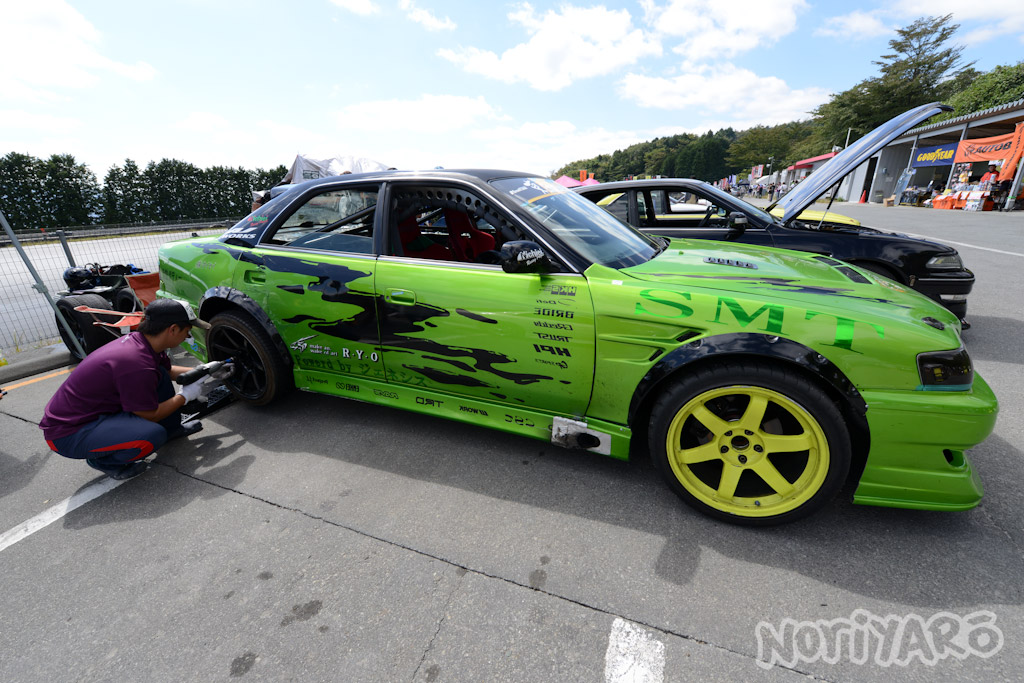 Most serious JZX competition drifters don’t slam the cars too hard in order to keep grip levels up where they should be, but you can do wonders for styling with a few little bolt-on fenders.

This guy sprayed up his ignition coil cover especially for the event.

More pics from the 2013 1JZ Meeting coming soon. Click here for coverage from previous years if you can’t wait for the next post!