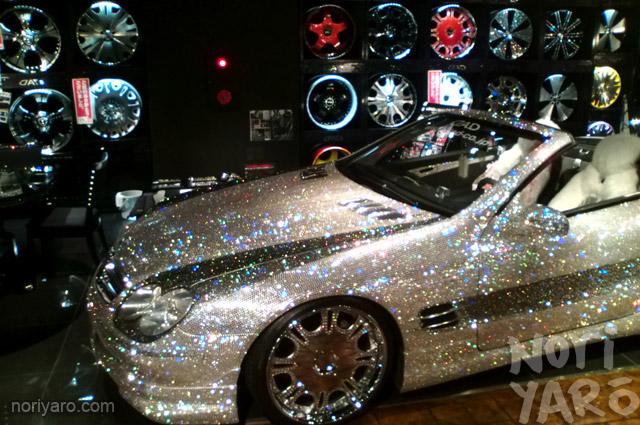 Sorry about the dodgy photos, but I only had my phone camera with me.

If you’re not sure about what Garson does, check out their website. Basically, they’re all about blinging out vans and sedans with all sorts of Swarovski crystal-embedded accessories. My favourite are the seat covers that look like someone skinned Bon Jovi, and the drink holders that make Snoop Dogg’s pimp cup look like those plastic things people use at barbecues.

Here’s a link to Garson’s location on Google Maps.

If you looking at the street view and wondering why it’s not there, the store seems to have been converted from a parking garage since the photo was taken.

While we’re on the subject of Amemura, if you’re ever going to be in the area, I highly recommend visiting a t-shirt shop called American Long River 55, which is only a couple of minutes from the Garson store. They stock some of the most rad prints I’ve ever seen on a shirt, with everything from full-on American tattoo-style to stuff with Japanese monsters and demons, and everything in between. I bought one of a geisha on a 1970s dirtbike jumping over a drum kit. That’s how awesome their shirts are.

The shop’s owner also has a nice ’57 Chevy that he’s restoring. Ask him to show you a picture of it.