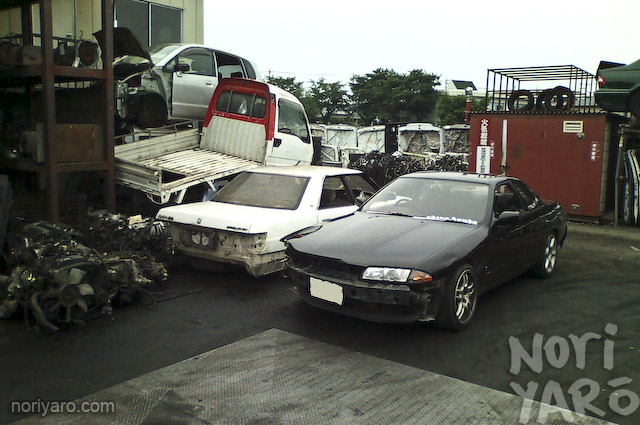 Before going to Nikko, let’s jump back for a minute. After crashing at the Himawari Racing day at Fuji, I was left without a bumper and headlight. Luckily, a nearby wrecker luckily had a black R32 bumper in stock, so I drove there to pick it up. 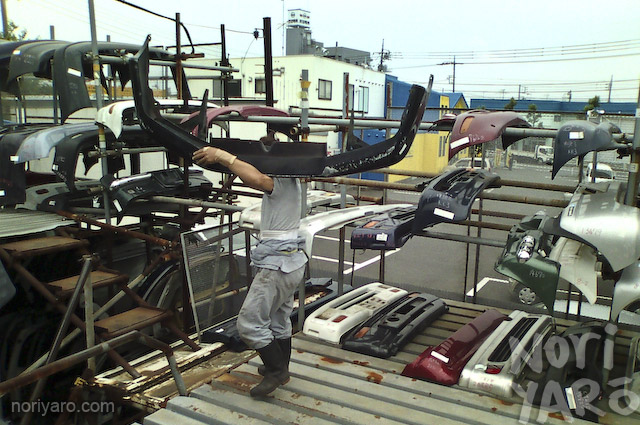 Here’s the wrecker carrying the bumper down from the storage area. It came with a reinforcement bar attached too, so I have a spare one now. 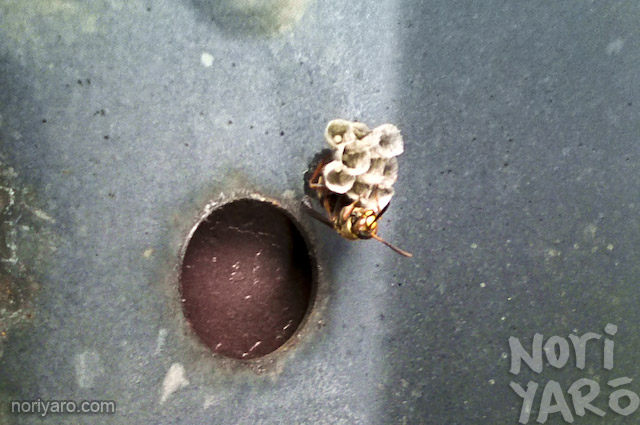 After stuffing the bumper inside the cabin, I found this happy little guy hiding in it! Mr Hornet, meet Mr Brake Cleaner! 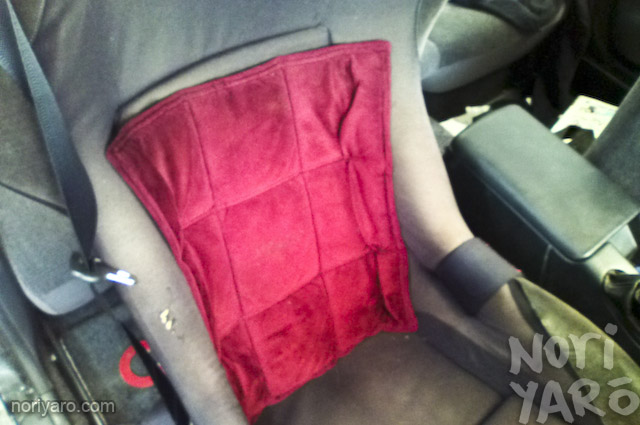 The wrecker also put this cushion in-between the bumper and the dashboard to stop it from getting scratched, so I decided to use it as a bit of padding on the backrest of my racing seat, which has precisely no padding left in that area. It says “Limited” on it, and looks like it came out of an old Gloria or something. 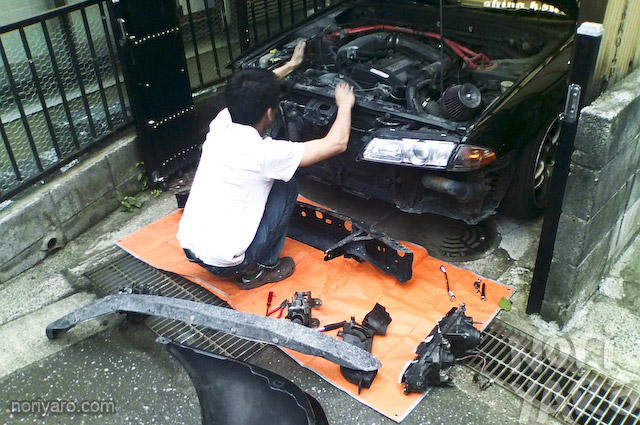 The first job was to fit the bumper. This is where I park my car usually, and as you can see, there’s not much room to play with. There’s also a massive water drain there too, so it’s not very comfortable to work on, and you have to be a bit careful if you put a tool or part down on the ground.

While were were at it, we took off the automatic spoiler the car came with, which had been broken for quite a while after I’d hit it on something. The whole assembly felt like it weighed about six or seven kilos! 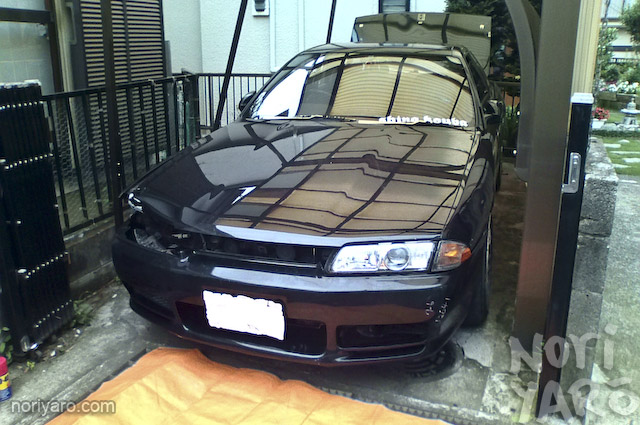 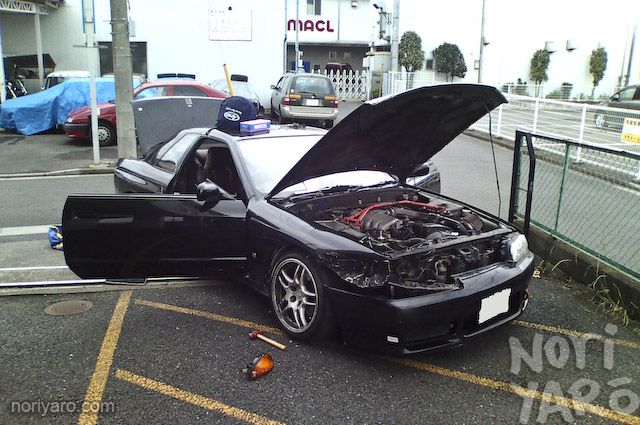 Next was the headlight and indicator, as well as some of the parts needed to compete in MSC.

Shino managed to find one of the integrated projector/foglight Skyline headlights for cheap (not a GT-R part), so now I have one projector and one integrated headlight. On top of that, I have one orange indicator and one clear indicator. Four different parts! They all work properly though, so that’s no problem. 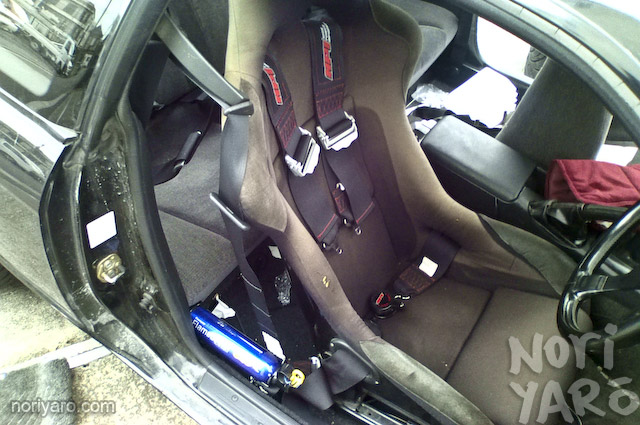 I brought my old HPI harness that I had in Australia with me to Japan, since I knew I’d need it at some point. A fire extinguisher is needed too, so I borrowed one from Riichan’s S14. 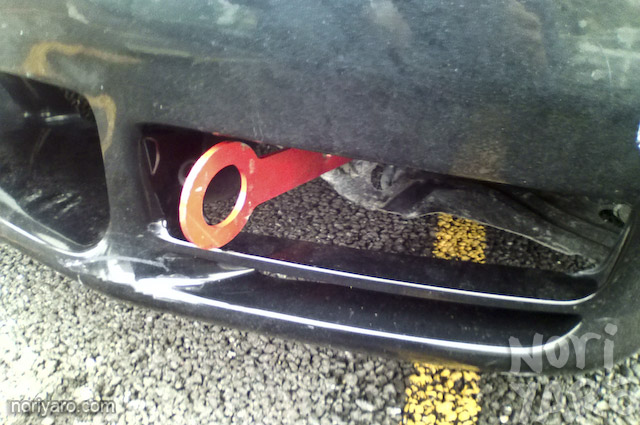 Tow hooks are also a requirement. Tomonori Akai has been making them in his spare time on his work’s laser cutter, so he sold me a couple. I also had to install a catalytic converter, which is an MSC requirement. 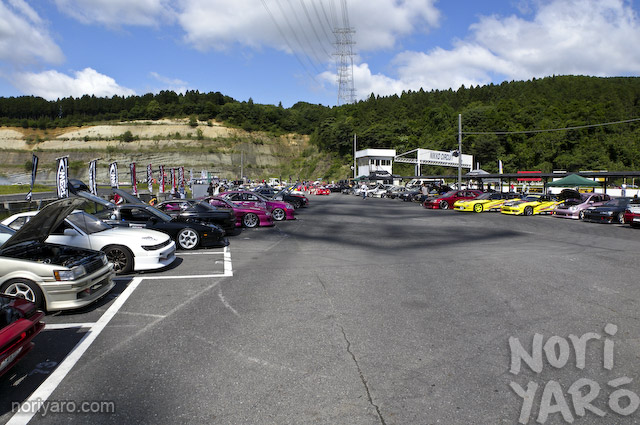 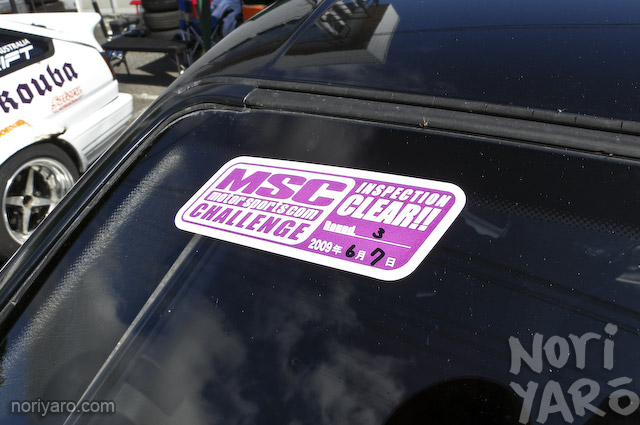 This is what scrutineering at MSC consists of:

Here’s some cool stuff from the paddock. 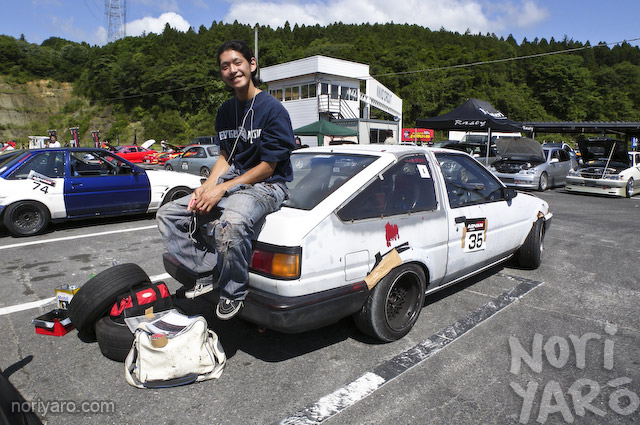 I dunno…why do AE86s look so good when they look so bad? This guy was in a three-car AE86 group in the Triple Class.

For the guys reading this in Australia; does this car remind you of anything? 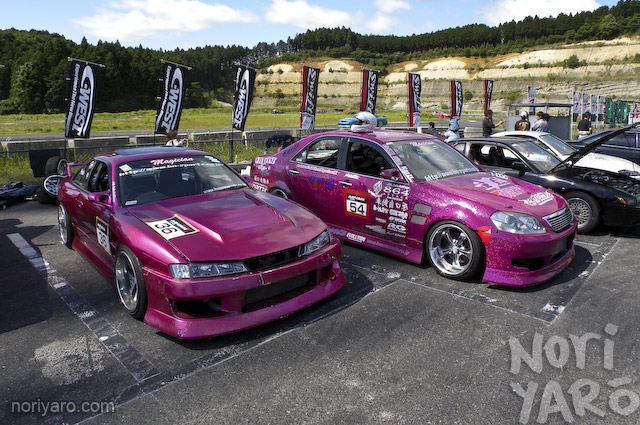 Someone asked a while ago to see another pic of the Magician S14. 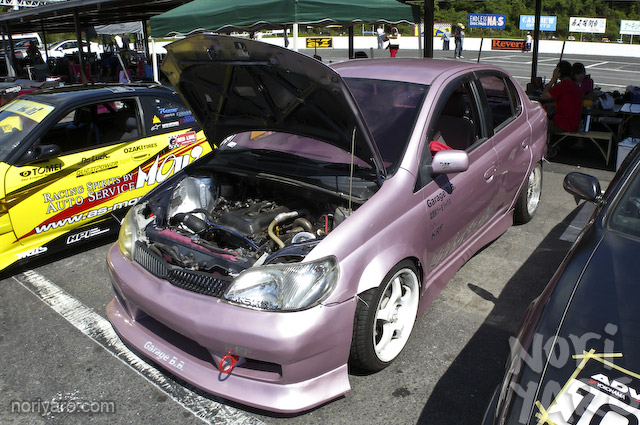 This Toyota Platz has been converted to rear-wheel-drive, with an SR20DET. 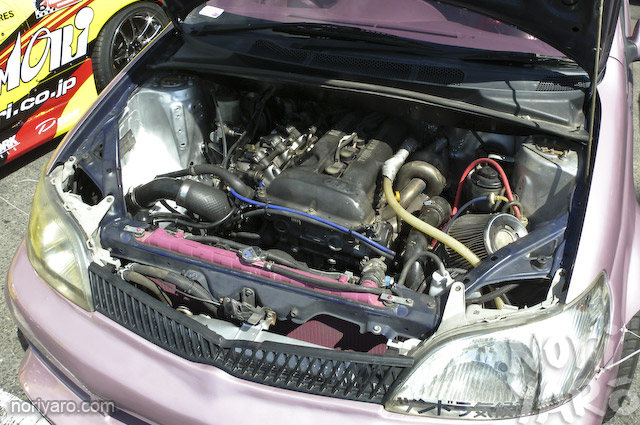 I had a bit of a look under it when it was on the car loader the owners brought it there with, and it’s a welder’s nightmare of fabrication. The front and rear end looked like S13 parts. It was featured in a Drift Tengoku a little while ago, so I should go and look it up.

It seems to drift pretty well considering it has an extremely short wheelbase, but the toe-out and camber settings look kind of extreme too. In any case, it’s pink and cute and makes you laugh, so that’s good enough for me. 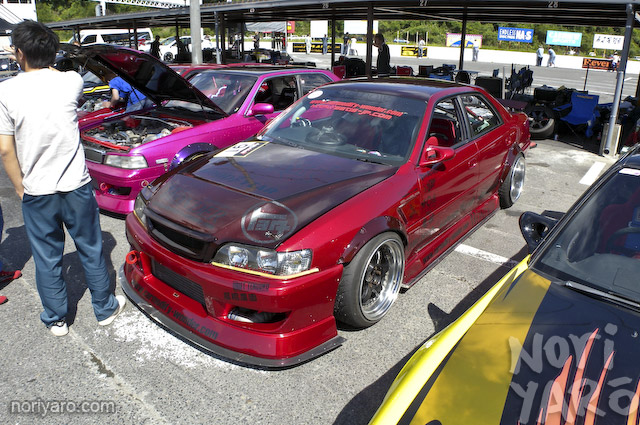 The Spirant JZX100 was there too.

His rear wheels get more ridiculous every time I see it. 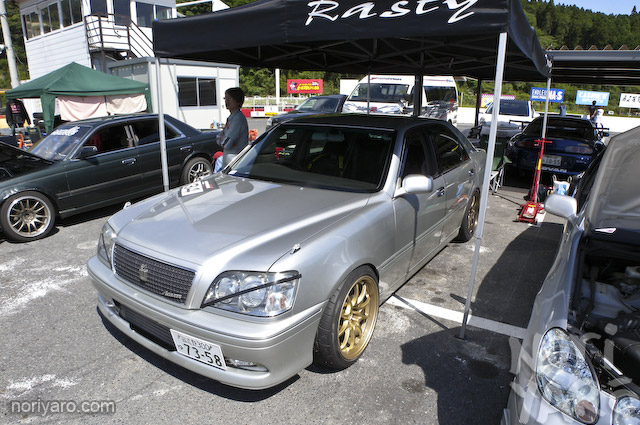 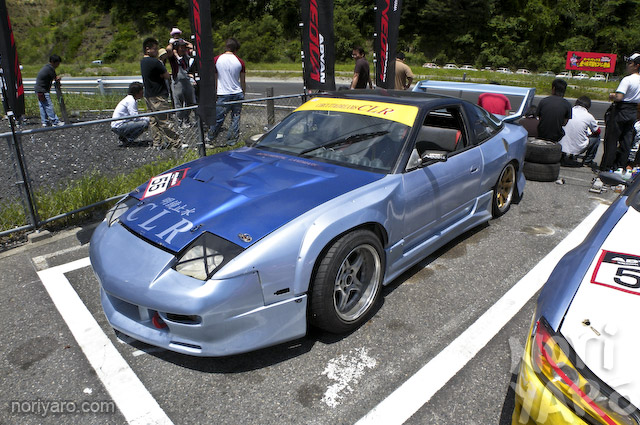 Caroline Racing’s Takuro Watanabe has added a bit of new aero to his backwards-entry 180SX. 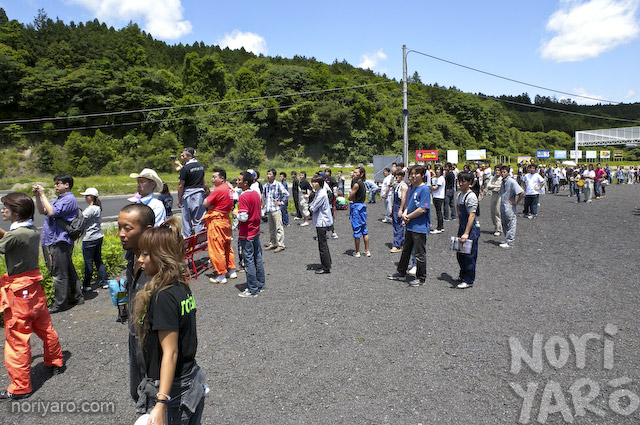 The weather couldn’t have been any better than it was. 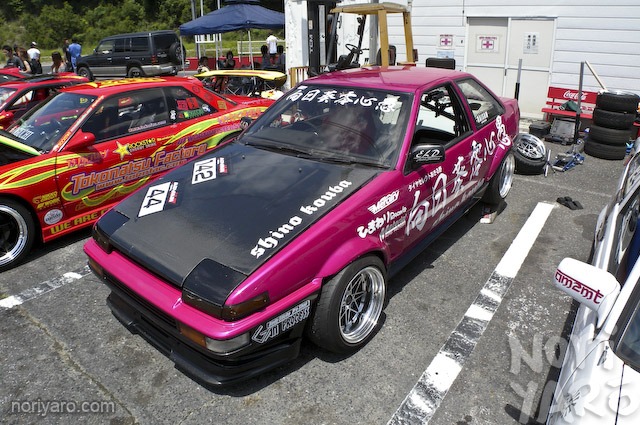 I forgot to post a pic of Kazuya from Himawari Racing’s AE86 in the last post, so here it is. 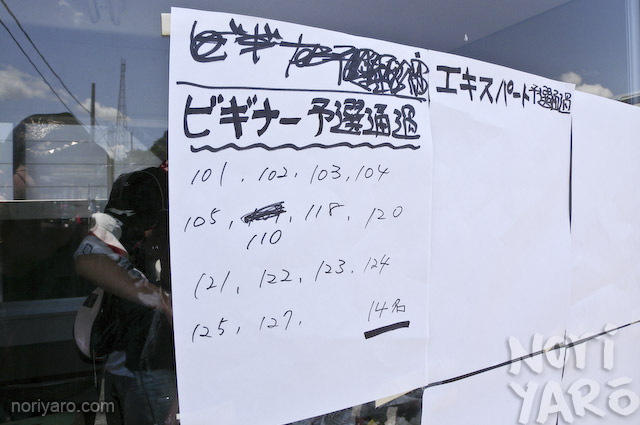 I had driven at Nikko during the week to try and get in a bit more track time for this event, but I think that while it was good practice for nailing down an entry technique, it lowered my confidence a bit for the rest of the course. Since I had spun so many times during the practice day, I was worried about spinning during the actual run if I tried to go at 100%. What made it worse was that almost nobody else spun. This was beginner class with twenty-four other entrants, and nobody spun!

After the ten minute practice session, I drove into the pits feeling much more confident in being able to go harder than I thought I could, since I had messed around a lot with tyre pressure settings during the last practice day and found something that worked. I did the first run at about 70%, and the second one at about 80%. It was obviously good enough for judges Manabu Orido and Toshiki Yoshioka, since entry #125 found its way onto the sheet for the next round! 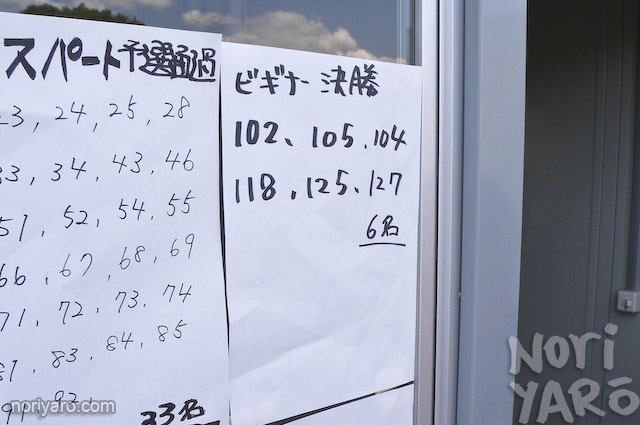 During the second round of twelve, I pushed it a bit harder, and managed two more decent runs. Watching from the starting line, I could see that I was starting my entries a bit further back than most of the other cars and with a bit more of a flick, so I felt pretty good about my chances again. Sure enough, #125 made it onto the sheet for the final six!

I obviously couldn’t hear what was being said over the microphones while I was driving, but watching some camcorder footage revealed some encouraging commentary.

“This is Alexi Smith, and he’s came all the way to to Japan to go drifting.”
“This is really his first drift competition in Japan? I don’t believe that. His approach is really good”
“He said he’s studying really hard how to win from Shino.”
*I do my run*
“That’s great! That was great, wasn’t it?”

Everyone else thought I’d made the podium from the final six, but I had my doubts. I was happy with the final runs, but I knew that both had mistakes in them. The first run felt good, and was fast and aggressive, but I tagged the dirt on the outside of the first corner, which counts as a course out. The second run was good, but I didn’t hold the same angle all the way around the corner.

I was kind of fifty-fifty on whether I’d made it or not, but everyone else was more surprised than me when they didn’t call my number. I think I’ve only driven Nikko eight times so far, which is absolutely nothing compared to the amount of times some of the locals have driven it, so I’m pretty happy with the result regardless!

When I was at the Best Motoring shoot at Tsukuba Circuit a little while ago, I mentioned to Orido that I was going to drive there, but he didn’t seem to think I was serious. After the award ceremonies, I asked him for some commentary on my runs and how I could improve them. The points he said were wrong with my runs were exactly what I thought were wrong with them, which was kind of a relief. He also said that it was surprising how well I drove, and that there was nothing wrong with my technique, just normal mistakes.

While we’re on that subject, you know how we make that rude motion where you clap your hand on your bicep and raise your fist in the air? In Japan, that means “strong and skilled” not “hey, screw you buddy”.

As for the other drivers I was with, Tomonori Akai was entered in the tandem-based Super Class, and looked good on his first run against Koichi Yamashita after Yamashita straightened slightly during the middle of the main corner. The Run Free SR20DET Levin ｃoupe was ridiculously fast on the approach though, and caused Tomo to overspeed into the corner on his chase run. He locked his front wheels and understeered, knocking him out of the Super Class competition. Shino made the best 12 of Expert Class and came eighth overall, but Kazuya’s runs didn’t get him past the first round. Shino also earned the nickname dorifuto kaasan or “drifting momma” from the judges.

Time to start training for D1 Street Legal at Honjo!