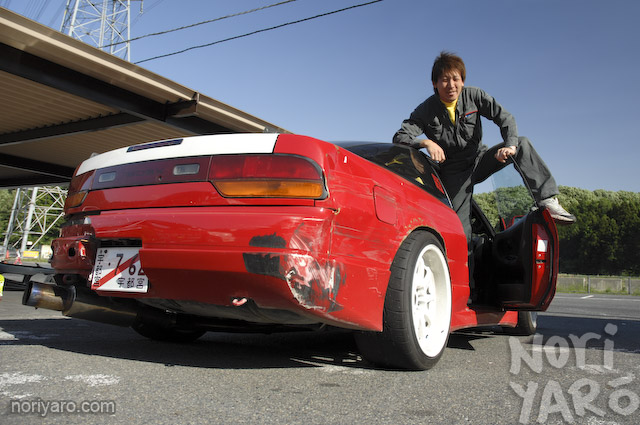 His D1 car has a Tomei 2.2L engine, but this SR20 is dead stock, apart from a pod filter, boost controller and S14 turbo.

“It just has a turbo swap with no other settings. Normal air flow meter and normal computer.” he said. 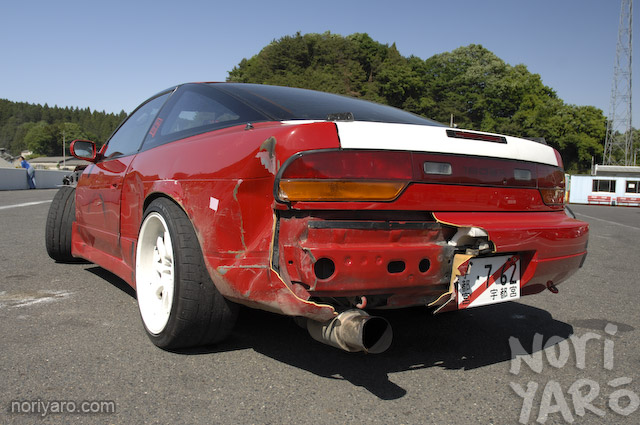 When I asked who caused the biggest dent on the back, he said “Daigo Saito”. 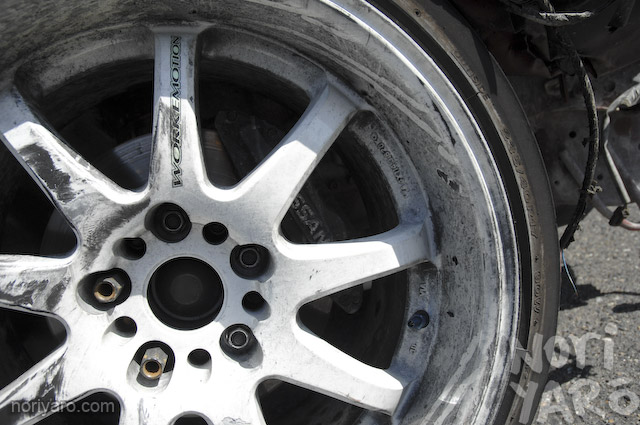 A lot of the modified bits on the car are leftovers from his D1 car, like these filthy Work Emotion XD9 wheels and leftover Bridgestone Potenza tyres. 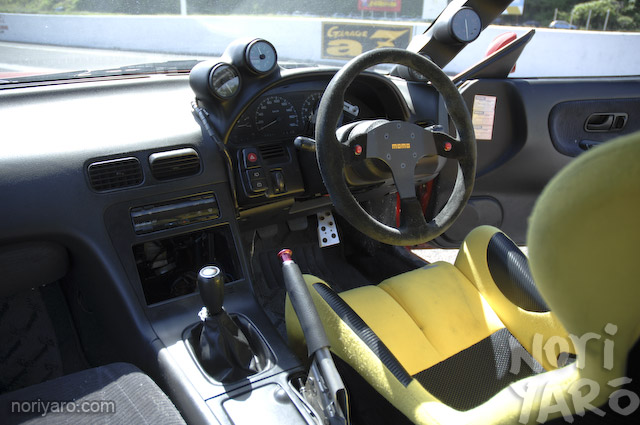 The yellow Thrash Racing seat is also a spare, since Fukuda is sponsored by Bride this season. I think only one of those gauges actually works.

The gearbox and clutch are still factory parts, even though he uses 265-series Potenzas on the back. Think about that, all the people who constantly break parts.

Perhaps you need a defter touch? 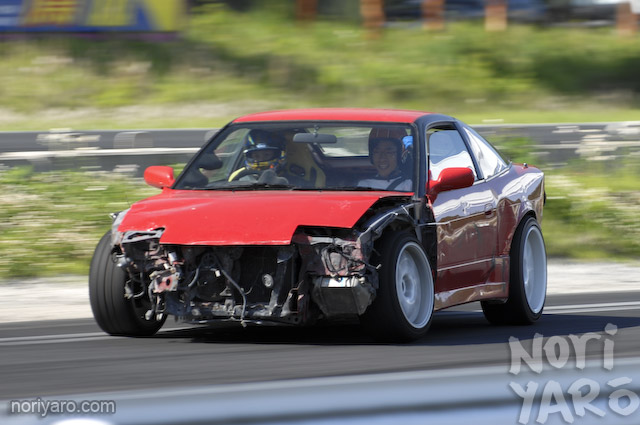 If the passenger’s face is anything to go by, it’s still a lot of fun. 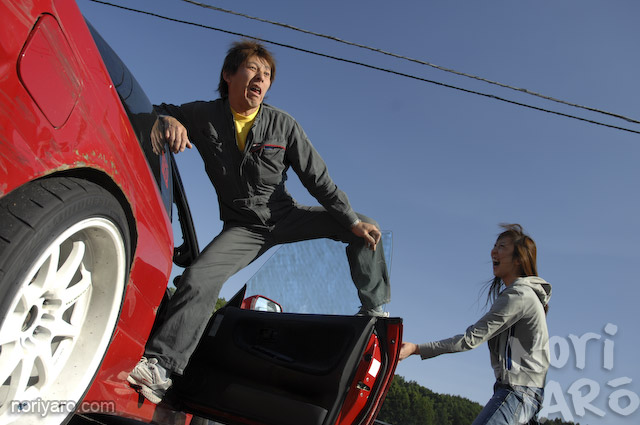 Team Fluke’s Takako Sugiyama decided to harass Fukuda a bit while we were shooting. 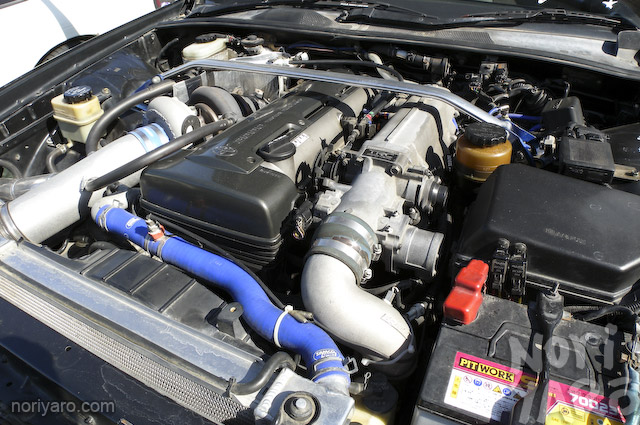 The engine is a little bit different to Fukuda’s stock SR20! That’s a 2JZ swap in there… 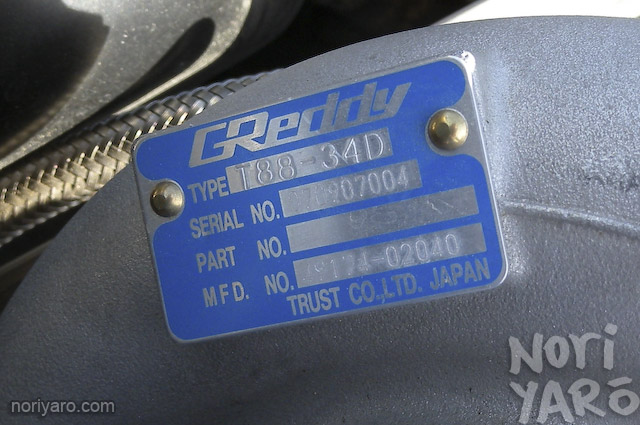 …with a T-88 and an ECU programmed by Tohru Inose at Friends Racing! If you don’t know what that means, search Youtube with the words “1000hp Aristo”. 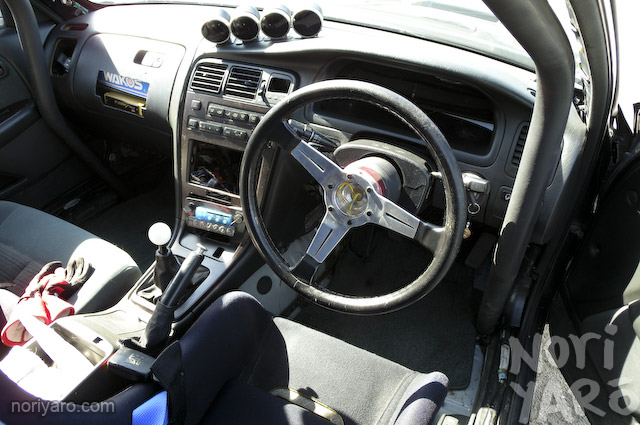 The interior is fairly untouched with the rear seats stripped out so more tyres can be crammed in on the way home.

All the gauges work too! 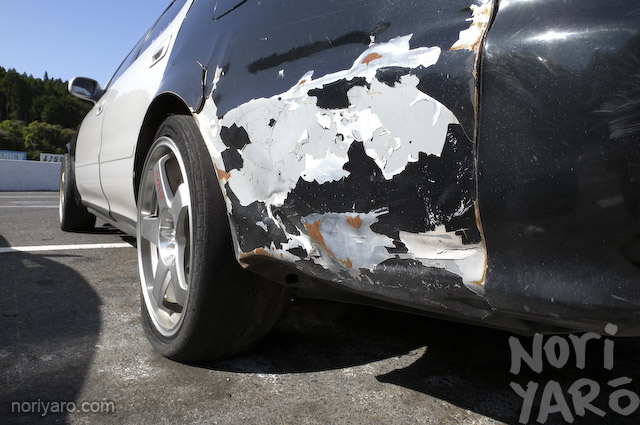 When I asked how this dent happened, Winds Auto’s Hiromi said “Daigo”.

If you’re wondering how Daigo’s car looks, there a pic in the wallpaper section! 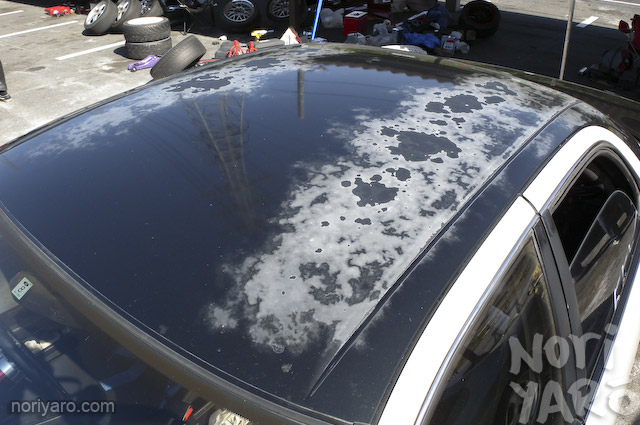 Most missile cars have something wrong with them that made them not worth selling for a decent price, like this faded paint. 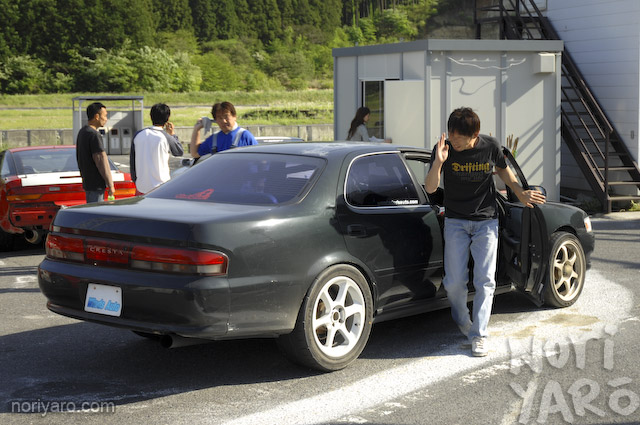 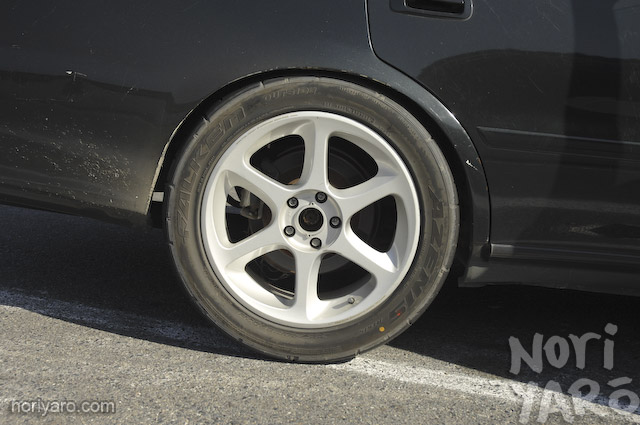 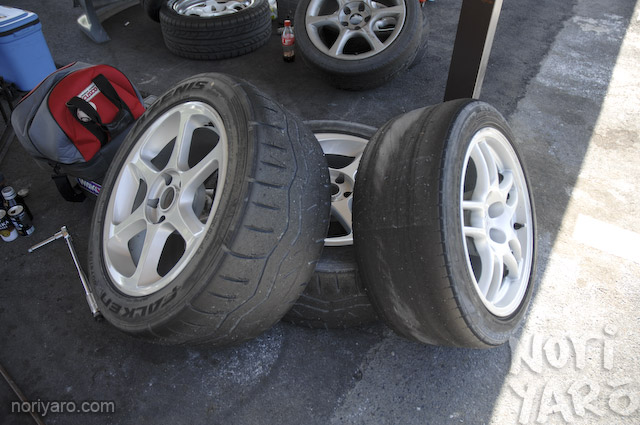 With the kind of power a T-88-wearing 2JZ has, it doesn’t take long to turn tyres bald though. 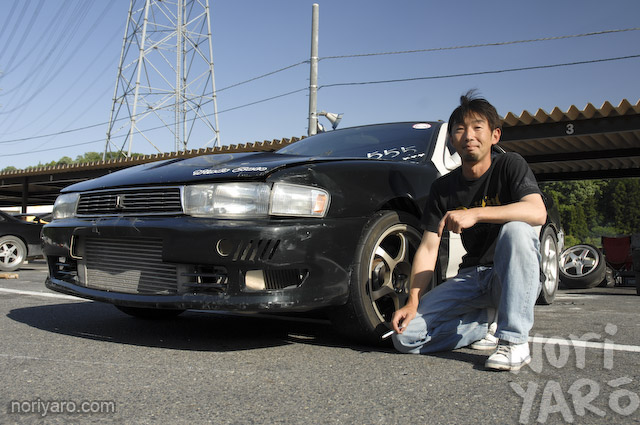 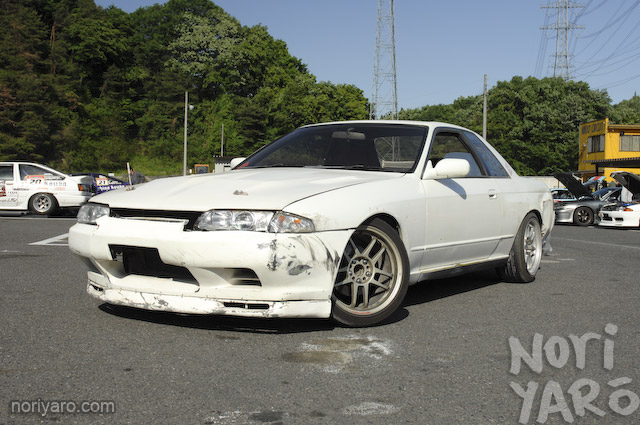 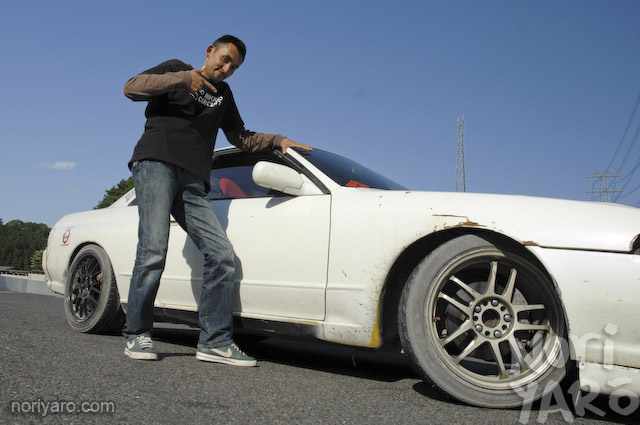 Tomikuda’s shop, TS Factory, is an RB20 and RB25 specialist these days, so it only makes sense that he drives an R32. 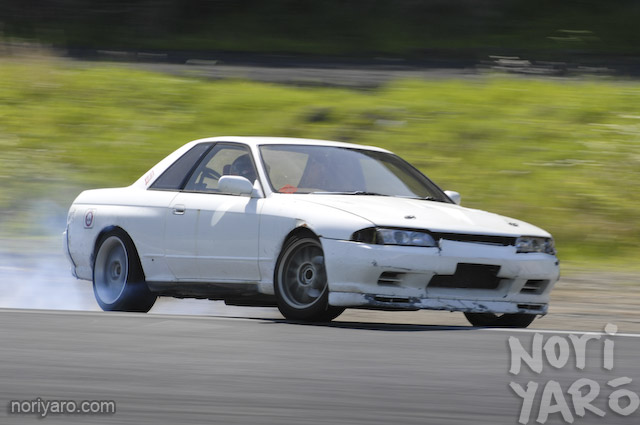 Tomikuda’s decades of driving at Nikko really show. He can nail exactly the same line, lap after lap.

Most of this damage was caused by the car’s previous owner, a customer of Tomikuda’s. 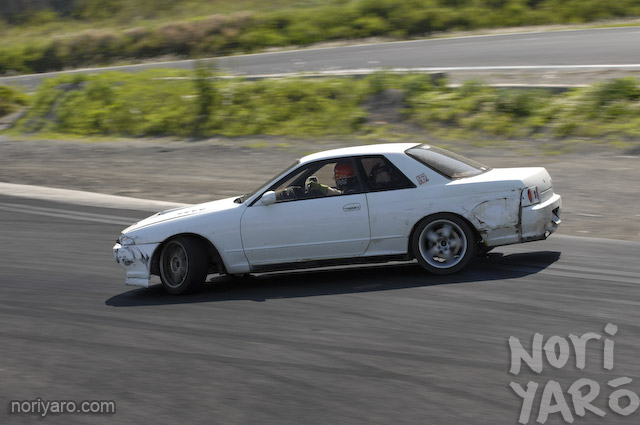 Tie-rod spacers and kirekaku (cut) knuckles give the Skyline plenty of lock. 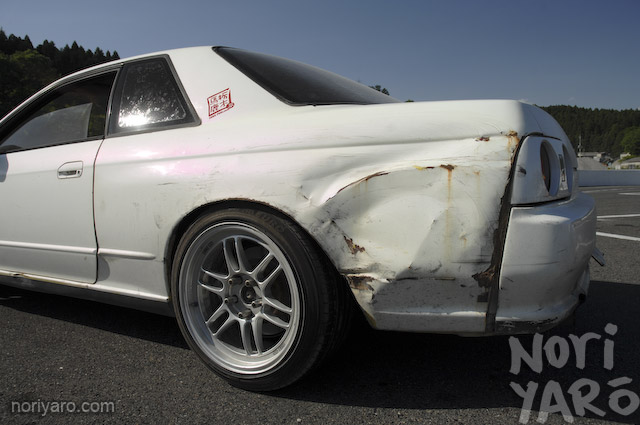 No, this one wasn’t caused by Daigo Saito. I think Tomikuda’s smart enough to avoid driving in front of him! 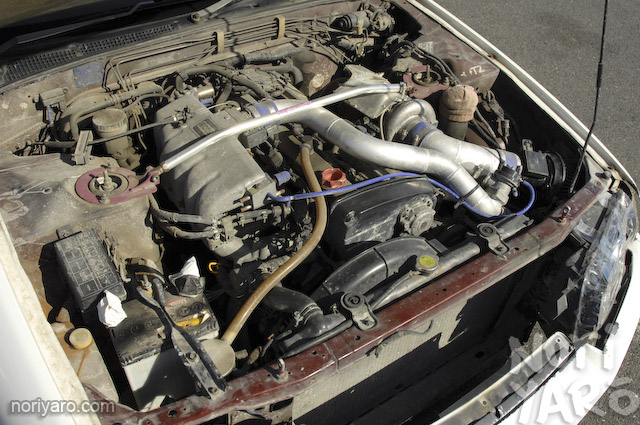 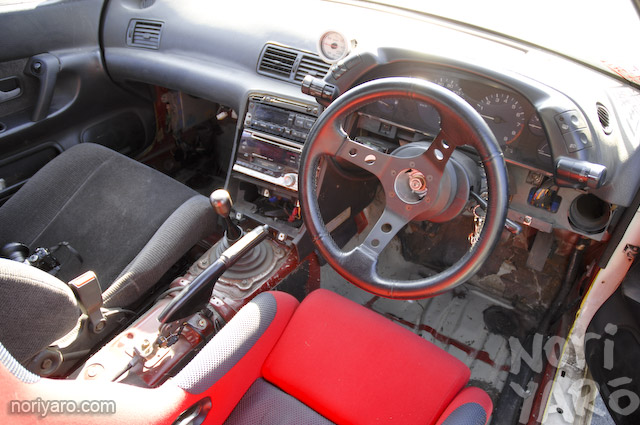 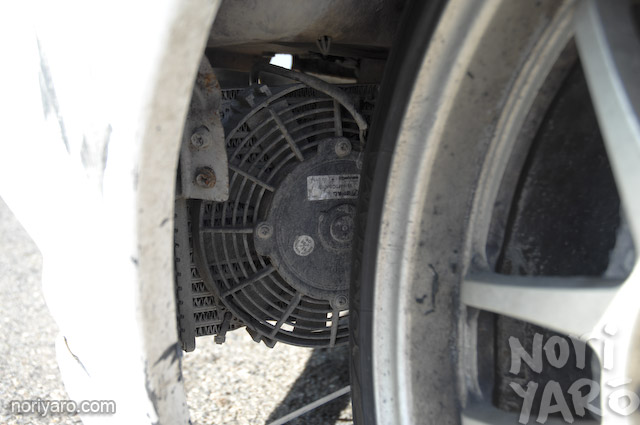 The intercooler has a thermofan attached to it, which is hooked up to the air conditioning condenser fan wiring. This means you can turn the thermofan on and off by pressing the aircon switch.

Tomikuda said it was broken though. 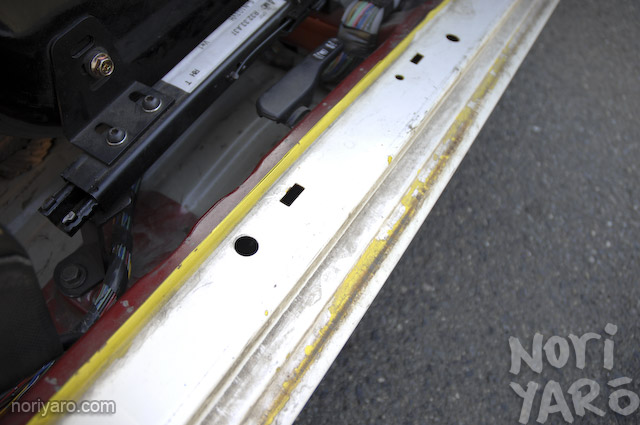 The car was originally that horrible burgundy that Skylines came in, but then it was yellow, and now it’s white with a purple pearl. 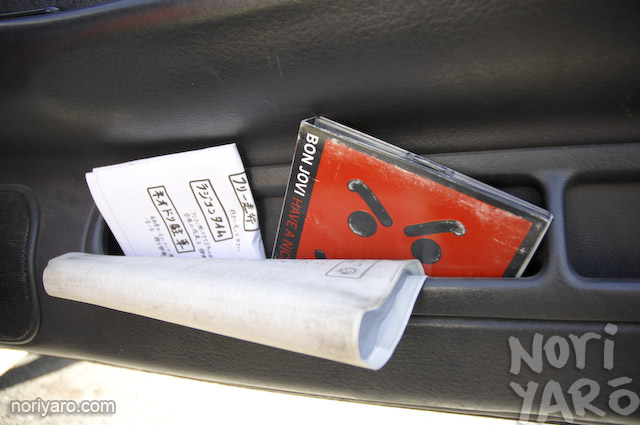 In the door pocket was a time schedule for a previous drift day, the plastic thing that the user’s manual and car paperwork came in (empty) and a Bon Jovi CD.

A lot of Japanese drifters seem to like Bon Jovi for some reason. 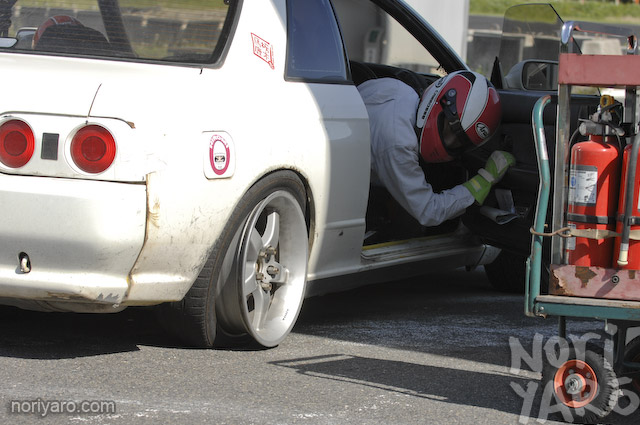 Obata took Tomikuda’s Skyline out for a few laps, but blew a tyre and had to roll all the way back in to the pits on the wheel. 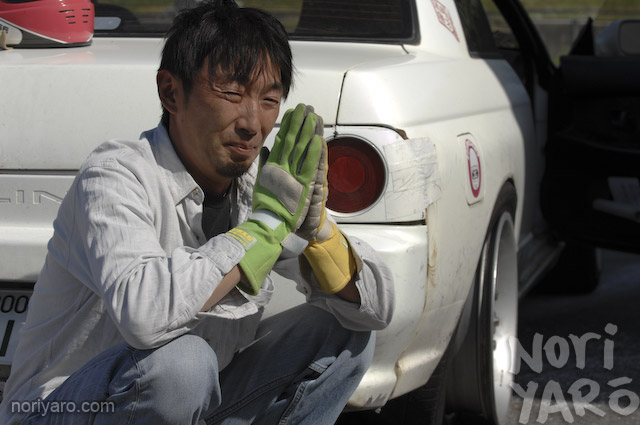 No need to apologise, it’s a missile!