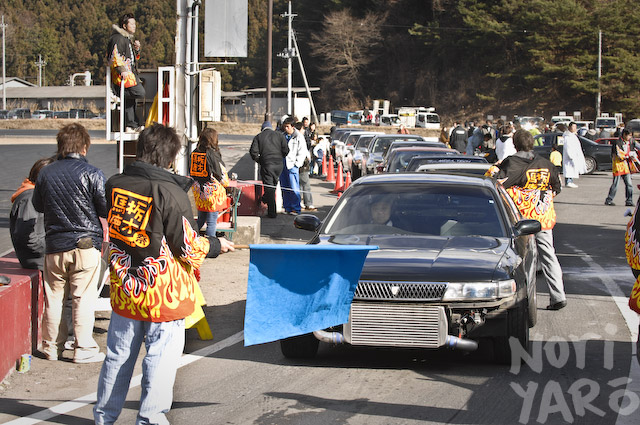 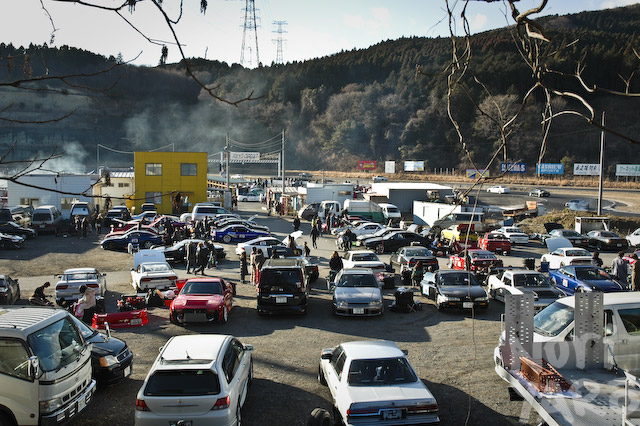 Nikko Circuit is the only real choice of drift venue in Tochigi for this kind of event, as it has been used for drifting for decades, and has a challenging set of corners that can be difficult to properly tackle for even the best of drivers, while still being easy for beginners to try their skills on. 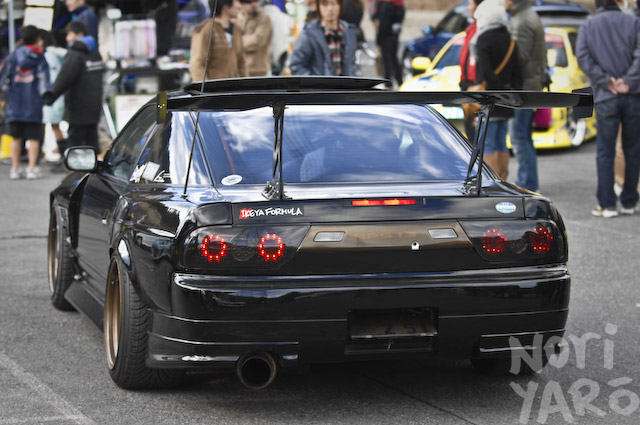 Both Fukuda and Koguchi drive 180SX cars in the D1 series, so it seems only natural that Tochigi is home to quite a few cool one-eighties. 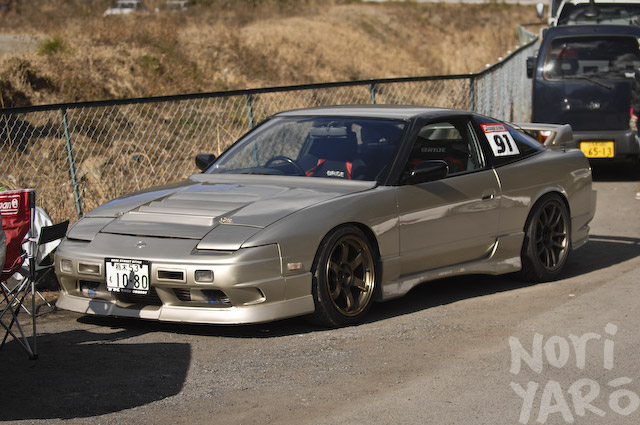 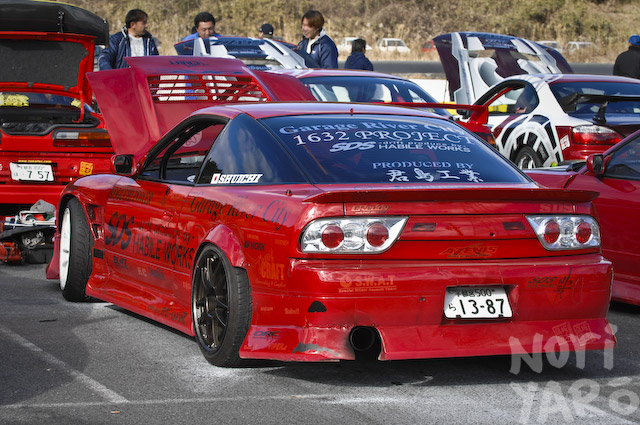 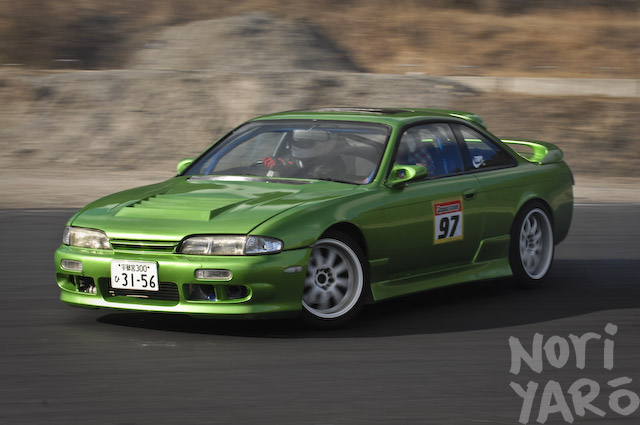 Of course, S14s aren’t forgotten about. 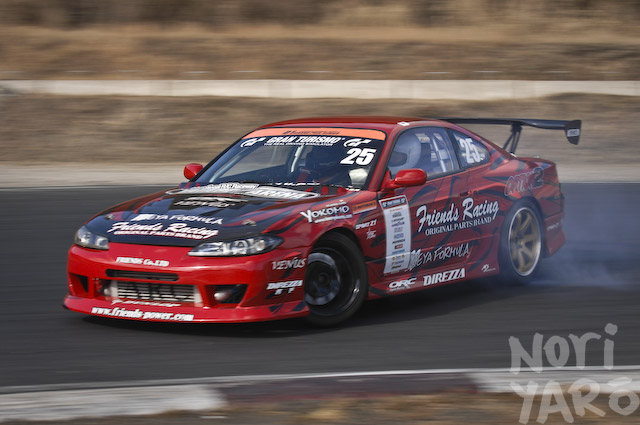 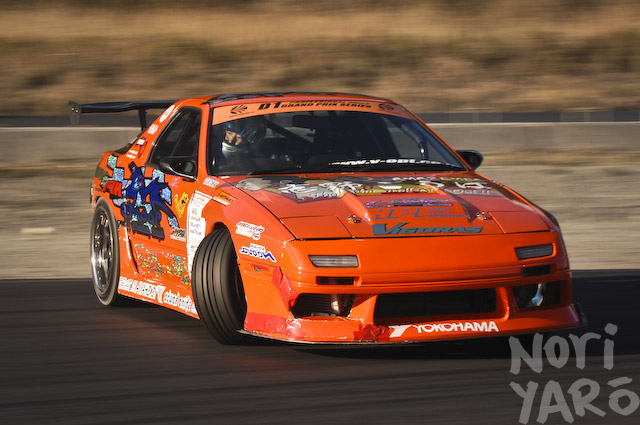 Another Tochigi baka, Kenji Takayama, brought out the orange FC he used in D1 before switching to the R Magic-built FD. 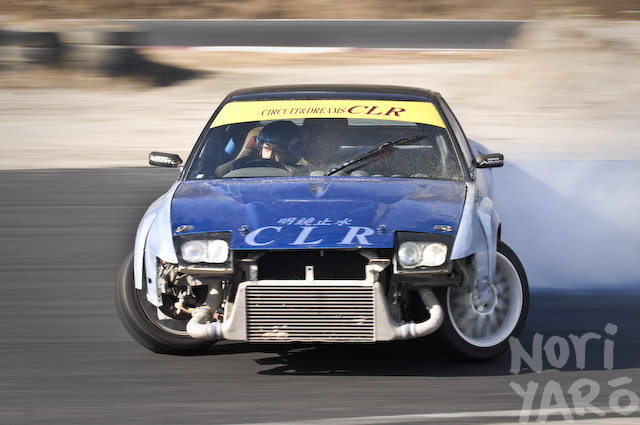 Takuro Watanabe, yet another local idiot, was getting ridiculous angle in his 180SX with super modified front knuckles. More on this in another article. 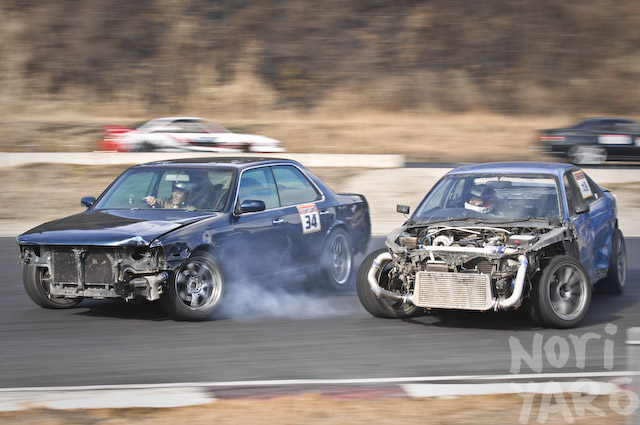 Missile drifting is the perfect activity for an idiot festival, with lots of drivers bringing out their beaters for some close driving. 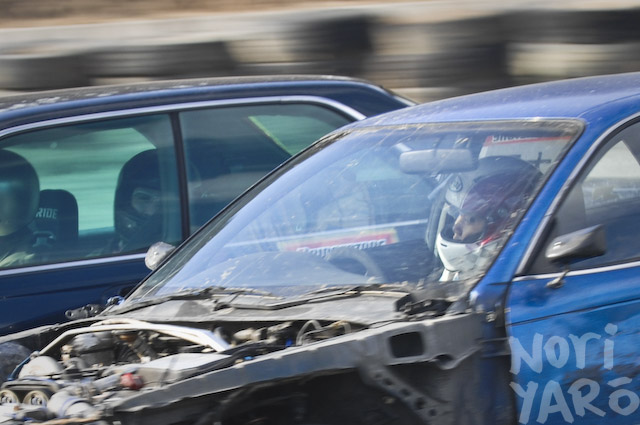 Whites of their eyes etc. 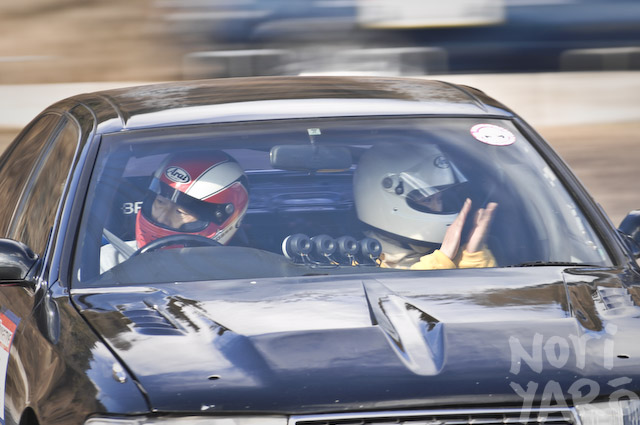 Hiromi from Winds Auto was encouraging the following driver almost every run. 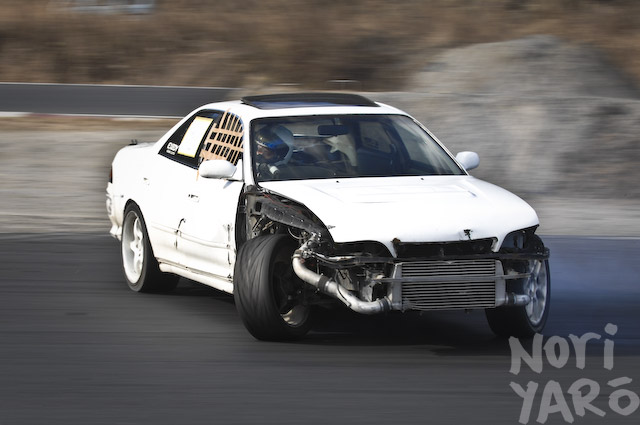 Driver’s-side windows are a requirement on almost every Japanese track these days to prevent arms coming out of the window if the car rolls over, which explains the gumtape net on Shinji Minowa’s JZX90 Mark II missile. 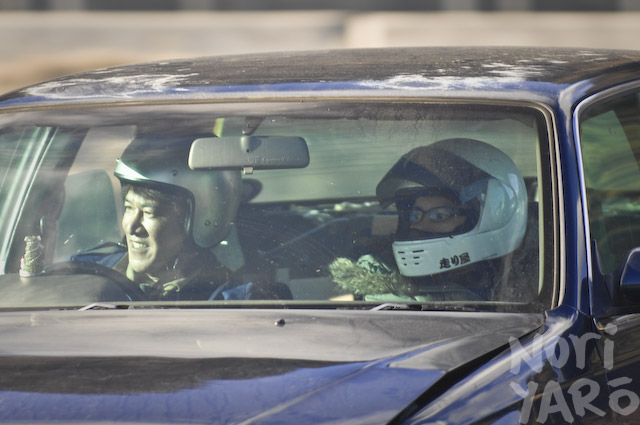 This is how much fun Koguchi can have in a near-stock C34 Laurel. 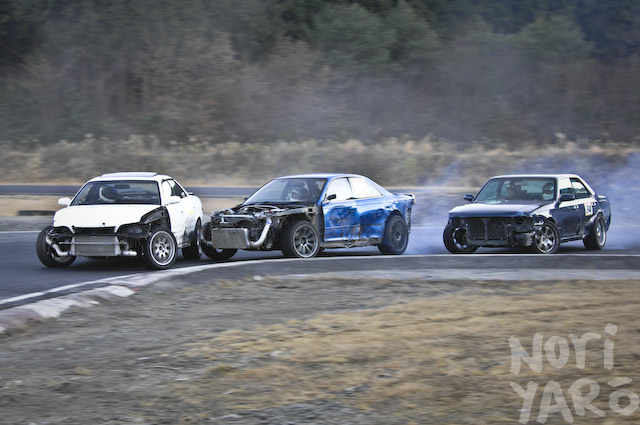 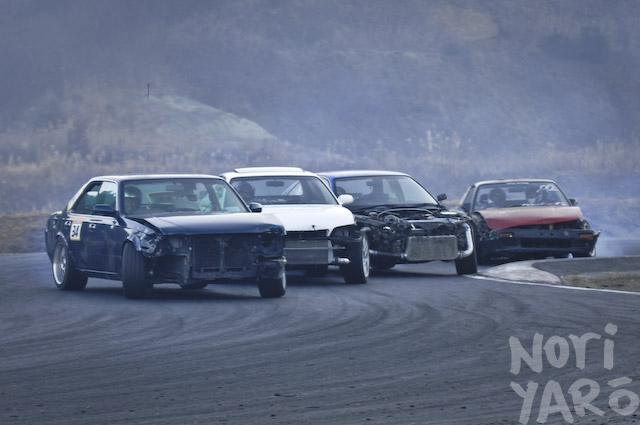 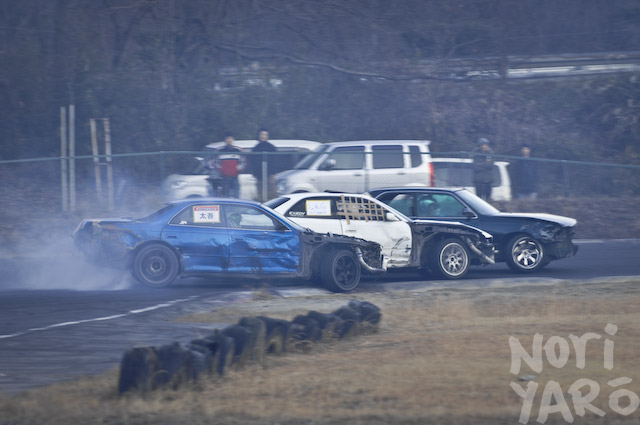 Of course, it doesn’t always go right. Where do you think they get those dents from? 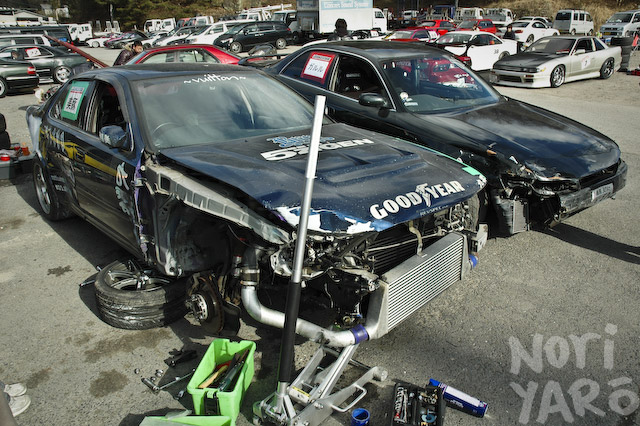 Yukio Matsui and Masahiko Mizuno’s missiles had a little coming together that put them out for the rest of the day. 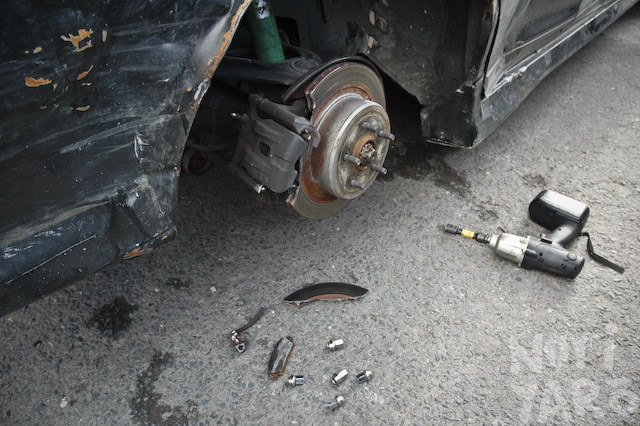 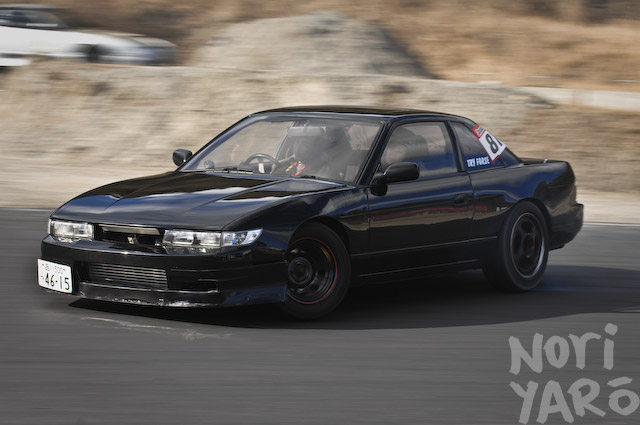 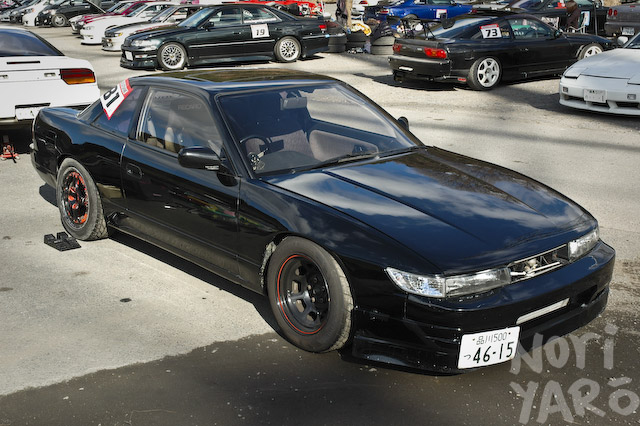 Believe it or not, these NASCAR-style steel wheels are sold new as an American-style fashion accessory, and are usually fitted to Hiace vans. 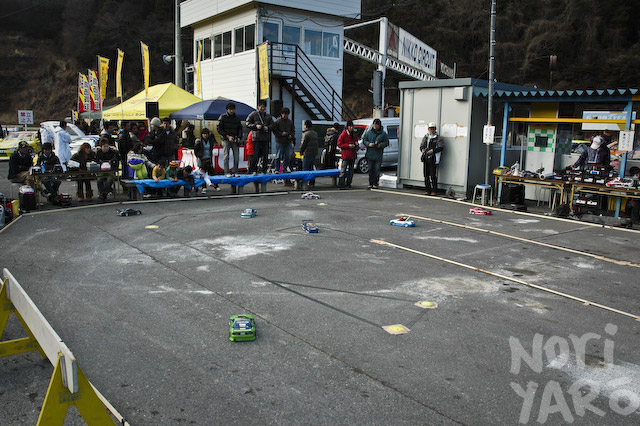 There was also a “rajikon” (RADIo remote CONtrol) course for some scale-model drifting. 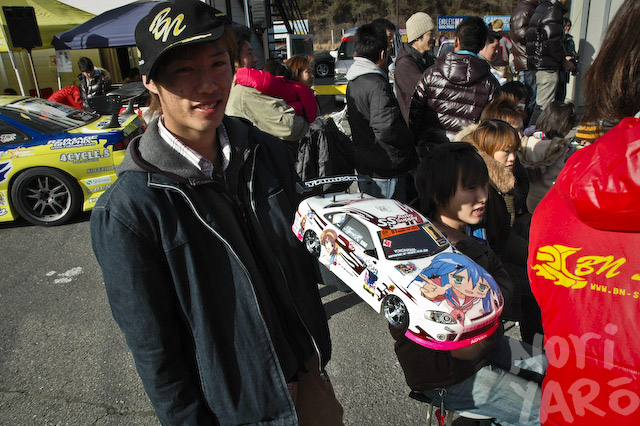 A scale-model itadorisha with Lucky Star’s Kona-chan on the bonnet. If you understood most of what I just said, you are a nerd. 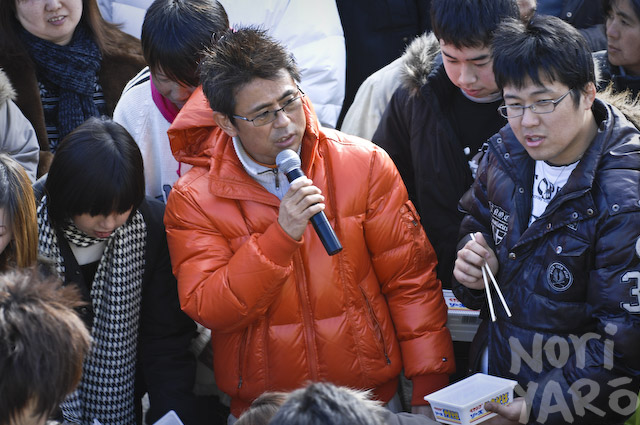 Emceeing the event was the voice of D1, Manabu Suzuki. I had to apologise to him for drunkedly accosting him and Keiichi Tsuchiya outside a convenience store at about midnight after the last Fuji Speedway D1 Grand Prix. He accepted my apology and thought it was quite funny. 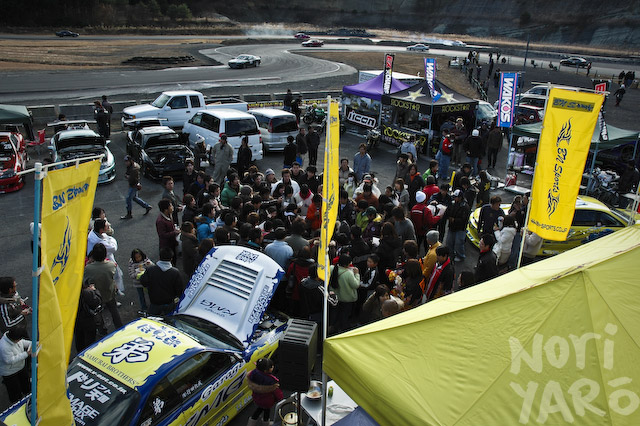 In the middle of this crowd is the largest tub of instant yakisoba you have ever seen. I didn’t manage to get a photo of it, but I’ll find some I’ll stick some up later. It was quite impressive. 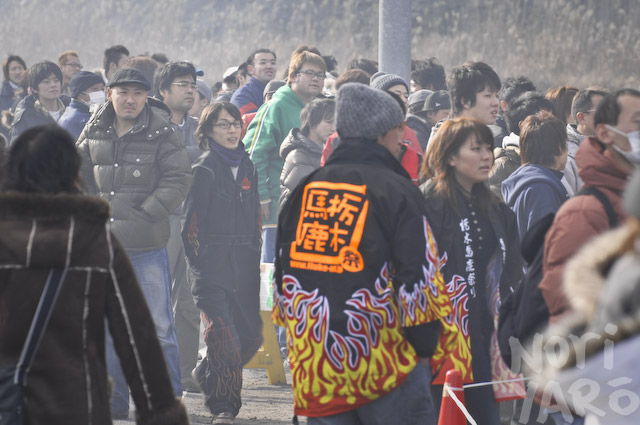 I didn’t get any photos of the bike stunt show either, but here you can clearly see the aftermath. 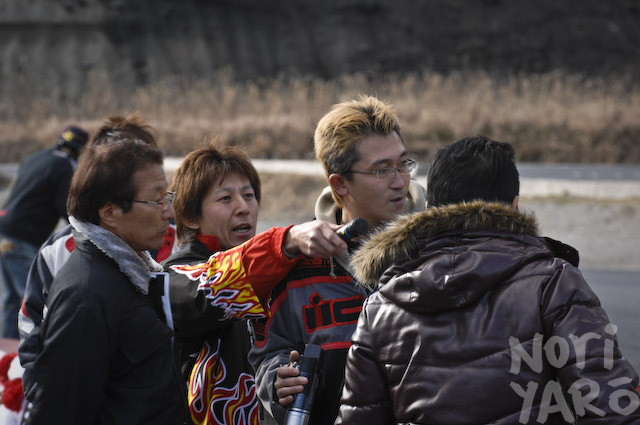 Unfortunately, the track owner (on the left) wasn’t too happy with the static burnouts the bikes had done, and had a bit of a yell at Fukuda. 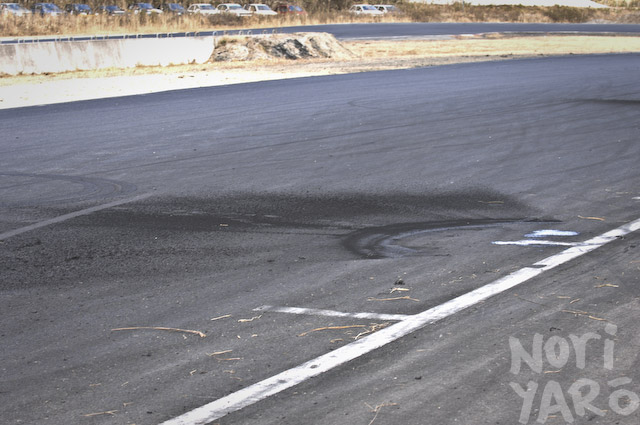 I have no idea what these things are based on, but they look like ridiculous amounts of fun. Any scooter experts? Honda Dio? 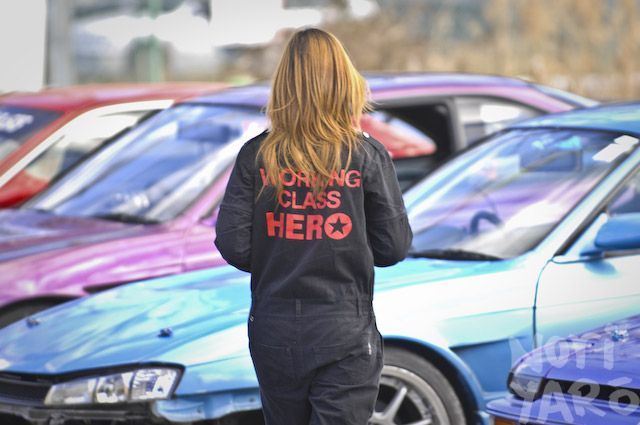