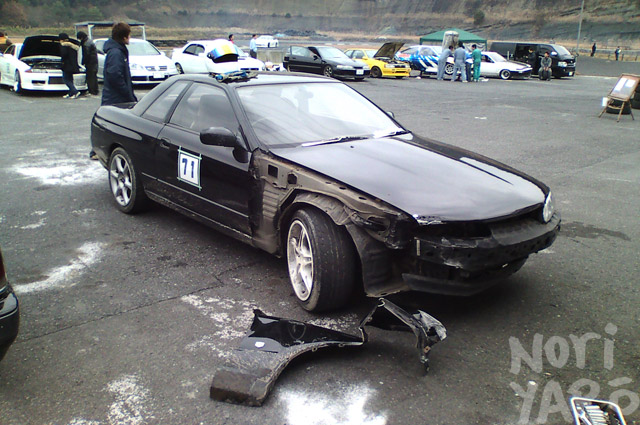 Yesterday was the Shino Kouba Soukoukai at Nikko Circuit. Nikko is a place that I have visited a good dozen times before and even ridden around with a couple of D1 drivers behind the wheel, but had never actually steered myself. Nikko is a circuit that featured quite heavily on the Option videos I used to watch back when drifting was still new to me, so I’ve been keen to try it out for a long time.

The closest I’ve come to this in the past was during a trip with Drift Battle Magazine’s Ben Ellis, and Queensland drifter Darren Appleton. The gearbox of the R32 four-door we were driving busted third and fourth gear in the first session, before I had a chance to see first-hand if Nikko was as much fun as everyone told me it was. I put sunglasses on and cried manly tears, I can tell you.

Finally, I had my chance yesterday, and in another Skyline, no less. Everything was going well until the third or fourth time I tried to link the back straight in a triple motion (“sanpatsu” in Japanese). Not being used to how violently Nikko’s inclined track edges pulls a car towards the dirt (I wrote “sucks a car off” in the first draft until I re-read it), a minor dirt drop soon turned into an “oh shit, that concrete block is coming up awfully fast” moment.

The car glanced off the wall and stopped, then I drove forwards a bit with my hands off the steering wheel to check if anything was broken. The one intelligent thing I can remember doing was turning the wheel straight before impact so I wouldn’t have to find a spare tie rod or lower arm, which I didn’t have. The steering wheel centred itself and the car drove in a straight line, and the bonnet looked OK, so I got back on the black stuff and drifted around onto the front straight. I would have kept going, but everyone on the pit wall was waving at me with their mouths open and eyes bugging out, so I thought there might have been something wrong that I couldn’t see, like coolant fountaining out of the radiator.

Long story short, the headlight, indicator and front bar were atomised, the guard will be a soft drink can in a few months, and the bumper support will need a bit of hammering. Pretty lucky, really. Everyone came running up with handfuls of tools expecting the worst, but it took about five minutes to check everything and strip off the broken parts. The retractable spoiler is now permanently retracted, but it never really worked properly to begin with.

It gave everyone a good laugh, at least. Hiromi and Kimihiro from Winds Auto, the people I bought the car from, were there too, so that was a bit embarrassing.

As for other cars there, I didn’t take my camera out much that day, but check out Ken Satoh’s turbo AE86. 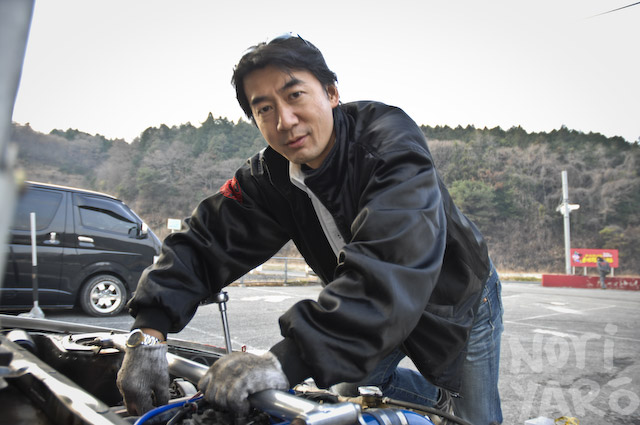 The blue manifold is from an AE111 turbo kit that Blitz used to make. The body is about as low as a Sprinter can get, and the interior is completely stripped and has that weird paraffin/greasy smell that all proper race cars should have. We were in the same class, which was named “full circuit full-throttle” class, and I couldn’t even remotely keep up with him. It moved like a full-scale remote control car.

Tomorrow, I’ll pick up a headlight and order a parking light and metal guard, then it’s back to Nikko for D1 driver Tomohiro Murayama’s drift day on Wednesday.