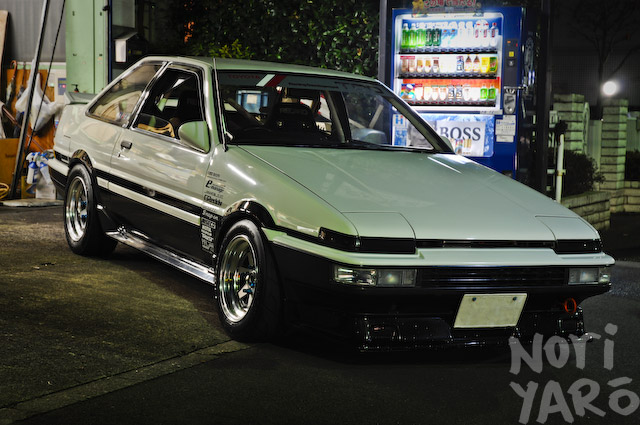 Yoichi’s car, while still bearing the various honest bits of wear-and tear you’d expect of a car that is often driven hard, has had a lot of hard work and expertise involved in its long build process, as well as a lot of money. Almost every single pipe and fitting in the car is a genuine Earls part, and everywhere you can see, and even some places you can’t, various standard fasteners have been replaced with anodised hex key bolts. Neat carbon-fibre brackets support the Blitz oil cooler, the GReddy extractors, radiator pipes and aircon lines and power-steering lines are all meticulously heat-wrapped, and all of the wiring is neat. A lot of the parts under the bonnet still might look kind-of stock, but everything has been messed with in some way. The standard throttle body has been bored out with a larger butterfly for example, and the tastefully painted rocker cover hides a full-on engine build. 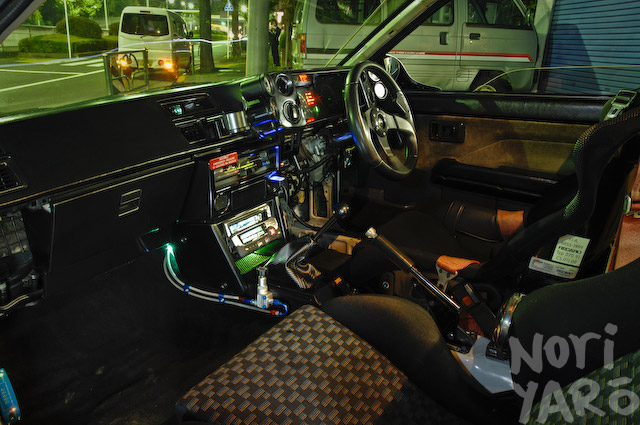 Since he is an engine builder by trade, Yoichi balanced and polished the entire engine to blueprint-spec himself, and built it with Cosworth pistons, an AE92 NA crankshaft, machined AE92 supercharged conrods, HKS camshafts and a 0.8mm head gasket. The car puts out about 150kW at 11.7:1 compression, and Yoichi says it feels the best somewhere between 8000 and 9000rpm. With no set rev limit on the ECU, knowing when to shift is a matter of feel. The engine management is still surprisingly standard, but tuning is supplemented by a GReddy E-Manage and a few modifications to the standard computer. 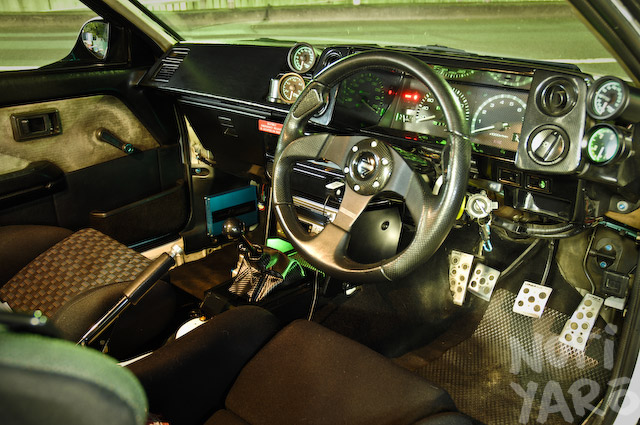 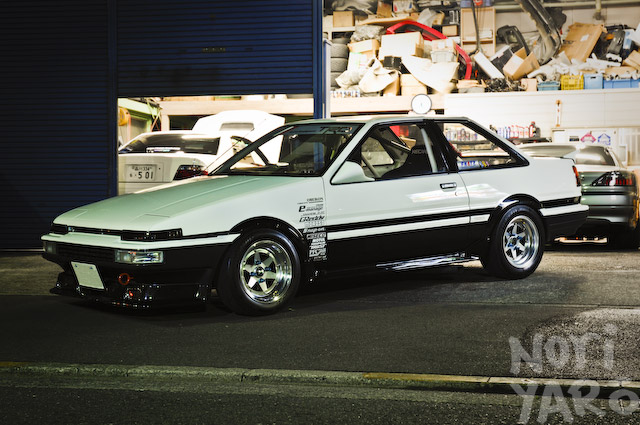 “Funatsu-san put a chip on the ECU and reprogrammed it himself.” he said, making a soldering motion with his hands. Funnily enough, the shop’s boss-man had the guts of an ECU laid out on his table in the office, and was strategically tacking on various daughterboard chips to it while we were speaking. As the technology becomes cheaper and knowledge becomes greater, a lot of Japanese shops are offering their own custom dyno tuning and ECU modification services, as opposed to simply plugging in an aftermarket computer or installing a pre-set ROM-tune chip as was often done in the past. 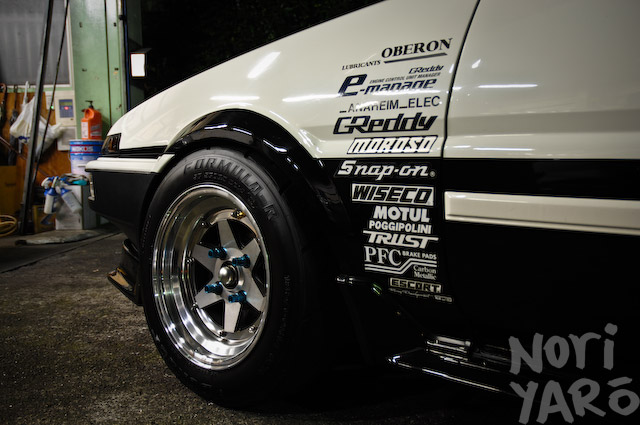 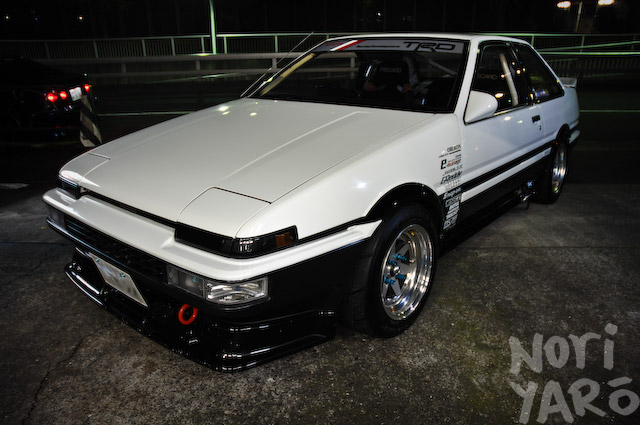 The rack and pinion has been custom-machined to faster-turning 16:1 to replace the standard Sprinter 18:1 steering ratio, and a power-steering conversion uses the rack assembly from a Toyota GX71, which explains the somewhat out-of-place looking fluid reservoir in the engine bay. The gearbox also has its own share of custom machine work, with a full double-synchro gearset contained within the T50 five-speed. 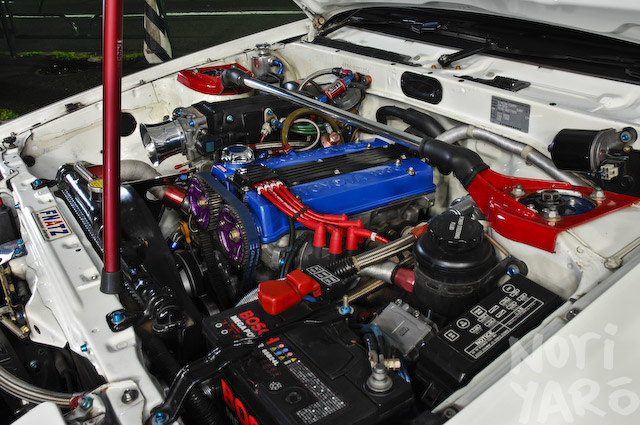 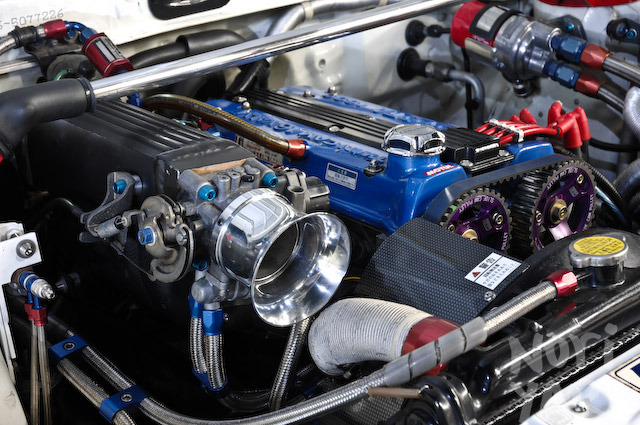 “Do you usually drive around on these?” I asked, looking at the rather non-street-spec 185/60 Dunlop Formula-R tyres the car was wearing on polished SSR Longchamp 14×7.5in wheels with blue anodised Weds Sport wheels nuts.
“I drive it to work every day with those tyres, but I have to be a bit careful not to attract too much attention.” he said.
Having a rather stock looking car like this with semi-slick tyres and a rollcage by Winning Sport is a rather obvious indication to the authorities in any part of the world that you probably get up to no good when they aren’t looking, but Yoichi likes to take the Trueno to the track just as much as he does to the back streets of Kanagawa.
“It can do over 240km/h on the straight at Fuji Speedway.” he said nonchalantly.
To put that in perspective, Formula 1 cars reach just a bit over 320km/h at the end of the 1.5km-long straight. It’s not a bad effort for a 1.6L naturally-aspirated road car that’s over twenty years old, but what about the lap times?
“I don’t know.” he said with a shrug.
“It doesn’t matter really. I just drive fast on the whole track.”

Even though Yoichi’s personal car is a small-four Sprinter, he mostly works day-to-day building and tuning high-power sixes like Nissan’s RB26 and the FNATZ workshop specialty, Toyota’s 2JZ. I asked him what his favourite engine was.
“It’s the RB26 of course. I like to get maximum horsepower from the engines I build, and you can get a lot of power from those.”
“So your job is building and tuning cars, and your hobby is building and tuning cars as well?” I asked.
“Well, the two things I like are cars and girls. I’ve only owned two cars in my life, and they were both AE86 coupes. This one is my second car ever, and I’ve had it for a long time.” he said with a smile as he pulled a cigarette packet from his jeans.
“It’s different with girls though.” 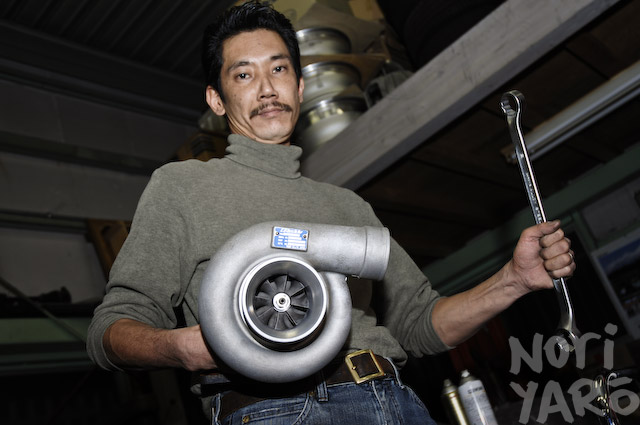